A Mississippi River levee, an Indiana water plant and an Ohio municipality take advantage of ease of installation and significant energy savings—as much as $2 million up front.
by Gary Patterson
03/17/2016

In recent decades, engineers contemplating variable speed pumping for their systems often only consider a variable frequency drive (VFD) setup. Some planned installations, however, can be technically or economically daunting. In such cases, an eddy current drive might be a more desirable solution. 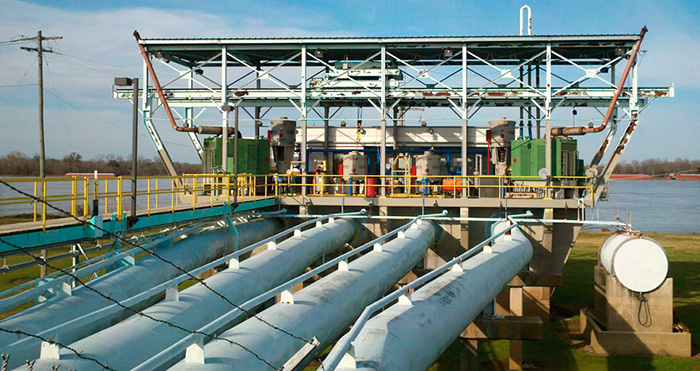 Image 1. Pump motors and engines are shown in an outdoor pumping station inside a Mississippi River levee, before the addition of eddy current drives. (Images and graphics courtesy of Dynamatic Inc.)

While many early VFD shortcomings have been overcome, some challenges persist in certain applications. Some VFDs are still equipped with bypass starter schemes to enable the pump if the VFD fails, and many are equipped with air conditioning to maintain a safe operating temperature. Some models still require custom-designed harmonic filters to meet regulatory harmonic distortion limits. The additional hardware for each of these solutions comes at a cost. Making room for and installing this equipment may lead to additional costs. When calculating system efficiency, many managers ignore the extra power necessary to operate this hardware.

1. Installation at a Mississippi River Levee

A freshwater supply district in Louisiana operated a pumping station originally built in 1954 with three pumps. A fourth pump was added in 1960. The pumps draw water from the Mississippi River and discharge on the other side of the levee into the adjacent bayou. All four of the vertical axial flow pumps were equipped with a constant-speed electric motor drive, with two having an alternative to operate the pumps with diesel engines through a right-angle gear when electric power failed.

In 2008, a consulting engineer and the district conducted a study to assess the condition and future use of the aging pump station. The pumping station was evaluated to determine whether it should be used as a continuous-duty pump station or as a backup. The district and its engineering firm decided to refurbish the pump station with two new pumps and to retain the engine/electric drive pumps. The station was designated for continuous duty.

Fluctuation of the river level and the resultant effect on total dynamic head (TDH) and flow capacity suggested that variable speed drives should be considered for the two new pumps.

The new pump required 300-hp, 2,400-volt motors for the rated design point of 45,000 gallons per minute (gpm) at 17.1 feet TDH at a nominal speed of 490 revolutions per minute (rpm). However, expected operating demand suggested that the pumps would operate at 85 percent speed (416 rpm), reducing the pump's brake horsepower (bhp) requirement to 111 hp, or 83 kilowatts (kW).

Using an average electrical cost of 8.5 cents per kilowatt-hour (kW-hr), the engineers calculated an expected additional operational cost of $9,520 per year ($0.085 x 112,000) per pump. For two pumps, this would equal $19,040 per year. Based on these calculations, it would seem that the VFD solution would be favored. Additional considerations, however, led the team to choose an eddy current drive solution.

This pumping station is on the river side of the levee, which is seasonally dry land but is regularly inundated by the river. It is built on a steel and concrete structure that stays above the water level, but it is not environmentally controlled or regularly attended. Space limitations and environmental concerns—temperature, humidity and exposure—presented serious challenges to using VFDs in this application.

Required infrastructure improvements and 2,400-volt VFDs would require $600,000 more to implement. Based on a simple payback analysis, assumed energy savings would take more than 30 years to recover the original extra investment. The expected remaining life of the pump station is approximately 10 to 12 years. This became a major factor in choosing the eddy current drive option.

The primary reason for choosing variable speed pumping was to stabilize operational control. Nonetheless, overall energy savings were achieved. The pumps operated at an average of 90 percent speed, with an estimated reduction in pump bhp from approximately 250 hp at 490 rpm to about 170 hp at 441 rpm.

Assuming the pumps run continuously in both scenarios, the power consumption comparison is shown in Equation 2.

The two new pumps, motors and eddy current drives, including digital excitation/controller units, were installed in 2012. The motors were specified with a totally enclosed, fan-cooled enclosure, and the eddy current drives received a National Electrical Manufacturer's Association (NEMA) weather-protected Type II enclosure, a design that allows ventilation using ambient air while restricting the entry of airborne moisture and contaminants. The eddy current drives required no more floor space than the motors themselves because they are vertical machines. The digital controllers were easily accommodated within the existing structure, requiring approximately 30 x 36 inches of space within a NEMA 1 wall-mount enclosure.

The user had experienced good reliability and service life from the eddy current drives and was equally satisfied with the newer VFD that replaced one of the eddy current units. They were, however, eager to integrate the control of the new variable speed equipment with their central control system using Ethernet communication.

The engineer compared new eddy current drives to VFDs for each of the ratings on the basis of first cost, installation considerations and operating cost expectations. The user elected to replace the 200-hp eddy current drive with a 480-volt VFD, similar to the arrangement implemented some years earlier on the other 200-hp pump. However, the 500-hp unit was considered too much power to be operated at 480 volts, and they chose to keep that system at 4,160 volts. Based on this consideration, the VFD option would have cost considerably more for the equipment and would need more space than was conveniently available. The 500-hp unit was replaced with a new eddy current drive and new drive motor.

The digital exciter/controller was supplied with an Ethernet Internet Protocol interface capability that was easily integrated into the user's central control system.

A large Ohio municipality engaged a consulting engineer in 2012 to explore options at its water pumping station. This station was originally equipped in 1976 with two 1,250-hp, 514-rpm vertical eddy current drives with synchronous drive motors operating at 4,160 volts. Although they operated satisfactorily for 35 years, they began to experience overheating in the exciter/controller cabinets. Temporary air-conditioned cooling air was implemented to keep the controllers operating while a permanent solution was studied and implemented.

It was originally assumed that the eddy current units would be replaced by VFDs. However, the engineers soon learned that new VFDs would occupy much more space than available at the aging facility. The harmful effects of heat were also a concern. The existing equipment was already in danger of failure because of the need to operate in ambient temperatures of 100 degrees F. New VFDs confined to a relatively small room would be in danger of overheating from their own heat discharge in such conditions. Furthermore, the engineers feared that this expensive new solution might last only a decade or so before needing significant repair or complete replacement at even more expense.

They chose to replace the aging eddy current drives in kind with new drives and induction motors. This solution was significantly less expensive on a first-cost basis and was a proven solution. The eddy current drive losses are successfully absorbed by the air in the motor room floor without the need for air conditioning, and the new controllers are rated to operate safely below their maximum rating with a substantial thermal margin for the electronics.

This solution was estimated to save the client about $2 million in initial installation costs.

Gary Patterson is the pump, fan, and compressor technical specialist for Dynamatic Inc., focusing on pumping and similar applications in the industrial and municipal markets. He holds a B.S. in electrical engineering from Michigan Technological University, where he pursued the power option, specializing in rotating equipment and electrical power generation, transmission and distribution.