Power pump NPSH tests are performed by holding pump speed and discharge pressure constant and varying the NPSH available in the system. Capacity remains constant for all NPSHA values above a certain point, but as NPSHA is reduced below this value, capacity begins to fall. Figure 1 plots some sample data from such an NPSH test. 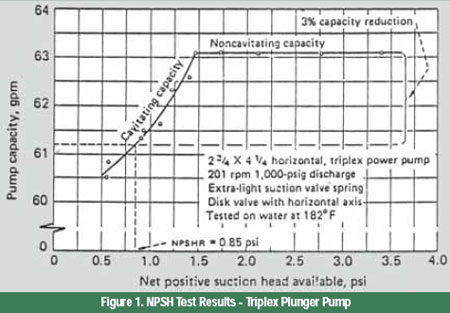 Similar to the 3 percent head drop used in centrifugal pump NPSH testing, the reciprocating pump industry has established a 3 percent capacity drop as a criterion for defining NPSHR. (Head or pressure cannot be used because the system, not the displacement pump, determines discharge pressure.) Therefore, NPSHA is reduced until the capacity drop has exceeded 3 percent. The NPSH that was available at the 3 percent reduction is established, by definition, as the NPSHR.

What is a Safe NPSH Margin for a Reciprocating Pump?

The NPSH required by the triplex pump above was 0.85 psi, and this is the value at which the pump will be quoted and sold with a 2.25 in plunger running at 201 rpm. But, just as with a centrifugal pump, if this unit is operated with 0.85 psi of NPSHA, it will experience cavitation. Recognition of this fact raises two questions:

Unfortunately, neither question is easy to answer.

If this unit were operated on a light hydrocarbon with a low differential pressure (200 to 300 psi), the effect of cavitation would be difficult to detect. With 0.85 psi of NPSHA, the ratio of vapor volume to liquid volume would be less than with water, and the compression ratio (discharge pressure to suction pressure) would be less than the 100+ that existed during the hot water test. Both would reduce the distance that the plunger would travel on its discharge stroke before compressing the pumpage to discharge pressure. The result would be a higher capacity.

The collapse of the vapor during the discharge stroke is much "softer" with the light hydrocarbon, causing less damage to metal surfaces, and less shock transmitted to power end bearings. The power end would also be lightly loaded, and the components better able to absorb shock loads. The result would be a quiet, smooth running pump with a long life.

On the other hand, if this unit were pumping cool water at 1,000 psi discharge, the effect of cavitation would be much more pronounced. With 0.85 psi of NPSHA, capacity would be less, and the more severe collapse of the vapor bubbles would damage metal surfaces more and create larger shocks. Power end bearings (and other components), more heavily loaded (due to the higher discharge pressure), would be less able to tolerate the shock without damage.

How much additional NPSHA is required to eliminate all cavitation? Figure 1 might suggest that, since full capacity is achieved with 1.5 psi of NPSHA, that amount would eliminate all cavitation. It is true that the pump would be at rated capacity, and that no vapor‑collapse shock would occur on the discharge stroke. However, as Collier noted (1), cavitation can occur in a reciprocating pump without reducing capacity.

Capacity is reduced only when cavitation is so severe that complete bubble collapse does not occur until the plunger is on its discharge stroke. Even when the bubbles completely collapse on the suction stroke, some damage can occur. During collapse, the liquid impinges on the face of the plunger, chewing metal away, similar to the damage seen in the eye of a centrifugal pump impeller exposed to similar cavitating conditions.

No known attempt has been made to quantify the extra margin of NPSHA required to preclude all cavitation in reciprocating pumps. Until that occurs, the author suggests a 50 percent NPSHA margin for cool‑water type applications over the 0 percent capacity‑drop NPSHA.