This midcontinent pipeline gathers, processes, stores and transports natural gas—in this case, propane. Because of its geographic location, extreme temperatures and conditions are a factor in the selection of major equipment and components. The pumps operate at 2,917 gallons per minute with 2,926 feet at 1,500 horsepower and 3,560 revolutions per minute (rpm).

The pipeline company was experiencing an acoustic resonance vibration problem at the pump crossover, causing major maintenance and repair issues. Acoustic resonance occurs when a system experiences extreme vibration due to excessive pump pressure and pulsation, with frequencies loud enough for humans to hear. This can happen with the use of variable speed drives.

The pulsations are caused by a non-uniform flow from turbulence, sudden change of flow structure, direction or cross-section.

The acoustic resonance had existed since the pumps were installed more than five years ago. Rather than repairing or replacing them, the company performed continuous unscheduled maintenance that cost as much as $35,000 in a single month.

Acoustic resonance is a reaction of the impeller to the liquid that is being pumped. It is a sound wave that passes through the crossover, creating a vane pass.

In this case, the acoustic resonance was causing the cracking of pipe nipples, tubing and flanges. It was also causing support system failures and frequent bearing issues.

High maintenance costs are not the only downside to acoustic resonance. An additional problem that can occur is a release of the product that is being transported. Cracks in the piping or joint breaks can cause the product to be released into the environment.

The Pipeline and Hazardous Materials Safety Administration (PHMSA) and the U.S. Department of Transportation (DOT) are the regulatory agencies that monitor these types of releases, which cause risks for the environment. Because acoustic resonance causes stress and fatigue on the piping and structural components of the pump, the tubing can be sheared, causing the dangerous release.

The pipeline company commissioned a repair and service provider to rerate the pumps and investigate the historical acoustic resonance problem. Rerating involves rebuilding (or repurposing) the pump for a different condition that meets current operating requirements. 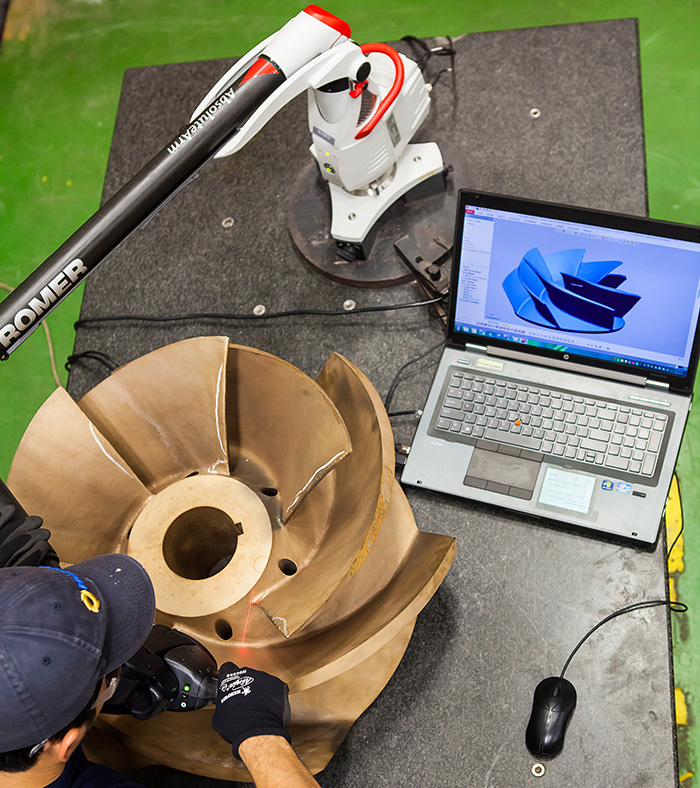 While the pumps were being rerated at one of the repair company’s Texas service locations, the firm’s engineers began an extensive acoustic resonance evaluation and analysis to determine how the existing impellers reacted to the long crossovers. Once this was identified, a new design was created to change and improve the configuration of the impellers, the vane counts and the vane angles.

The engineers developed a complete analysis of the volutes, the impellers and the crossovers, as well as a detailed explanation of how the impeller interacted and reacted within the long and the short crossovers. The analysis took two weeks to complete.

Using a traditional pattern in a cast pour, a shifting of the vanes can occur and cause inconsistencies within the design.

Milled vane technology uses a solid block material milled on a five-axis computer numeric control (CNC) machine. The homogeneous material does not have the inclusions inherent with a cast pouring. The material has no deviation from the design and is advantageous when custom building the hydraulics for a specific and unique application.

For this project, there were nine impellers—three impellers on each of the three pumps. Once the design was completed, the pumps were sent to the firm’s Hydraulic Institute Pump Test Lab Approval Program-certified performance test lab, where net positive suction head (NPSH) tests and a complete spectrum vibration testing of the pump were performed.

The tests were used to verify and determine the answers to two questions:

Tests showed that the performance was above standard, and the vibration showed a significant drop. The aptitude of the vane pass vibration (acoustic resonance) was solved. The tests in the lab used water as the transport material.

Engineers needed to determine how the pumps would react in the actual application using propane. Because sound waves move differently in different liquids, calculations are used to measure sound wave variances between water and propane.

The engineering firm determined the actions of the sound waves as they would occur when the pump went into service with the gas. The test lab results proved that the new design significantly minimized the impact of the vane pass created by the acoustic resonance.

The pumps were installed in the field with field testing performed using propane and all other existing conditions. Field testing exceeded all expectations. “We didn’t know it was possible for these pumps to run so quietly,” the end user said.

The pumps have been running quietly, without acoustic resonance and with only the minimum required scheduled maintenance since they were installed in July 2016. The process from signing the order to delivering the pumps took six weeks.

Acoustic resonance is a common problem with these types of pumps, most prevalently occurring in oil and gas applications that use lighter liquids. It happens as a combination of the products being pumped (light end hydrocarbons) and the advent of the use of variable speed drives.

In this case, the pumps that were rerated were spares, so operation at the site did not stop. However, the speed of the project ensured that only minimum downtime occurred at the site. As an added benefit, the increased reliability enabled the company to increase its production capacity. In addition, the customer was able to make a transition of first cost modeling to a life-cycle cost approach that is proven to show added financial and reliability benefits over the equipment’s life.

By eliminating the acoustic resonance, the end user improved its reliability, its availability, and was able to switch from a reactive maintenance philosophy to a proactive model.

Prior to joining Hydro Inc. in 2014 as a strategic account manager responsible for re-rate projects, Greg Matteson held a number of maintenance and reliability positions in the oil and gas industry.

Jeff Johnson has 42 years of experience in the pump service industry covering numerous markets. Johnson joined Hydro in 2009 and is vice president of the oil and gas division. He was instrumental in the design and construction of Hydro’s 5,000-horsepower test lab, which was the first test lab certified and accredited by the Hydraulic Institute. For more information, visit hydroinc.com.