Another Look at Optimizing Pump Hydraulics

This column will provide feedback on a quiz published in my August 2016 Pumps & Systems column titled “Optimizing Pump Hydraulics: When Is It Important?” (Read it here) Readers were asked to estimate the amount of energy that would be saved by using a variable frequency drive (VFD) with a small centrifugal pump and to compare those savings to the energy used by a pump specifically designed for the required conditions (100 gallons per minute [gpm], 15 feet). 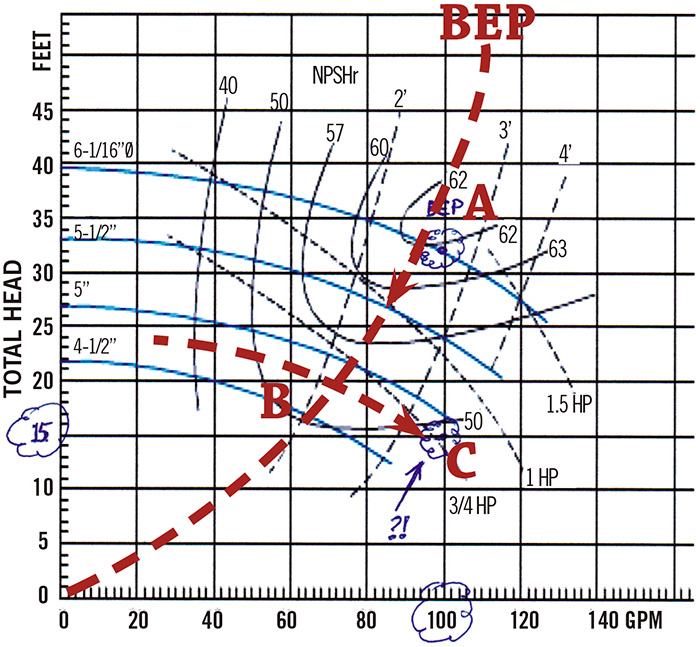 I recently read your article on optimizing pump hydraulics in the August issue of Pumps & Systems. Per the range chart of composite curves provided in Figure 1, it appears that the 1.5x3-6 centrifugal pump with reduced impeller diameter is the best choice to provide 15 feet of head at 100 gpm and 1,750 revolutions per minute (rpm).

The annual operating cost differences appear to be way too small to justify the additional equipment or maintenance costs if a VFD or custom pump is purchased.

Since the energy estimator calculates brake horsepower (BHP) and efficiency as a function of specific speed, the program output power and efficiency values are applicable for design points at the BEP. Therefore, only performance curve values were used to determine approximate annual operating costs for the trimmed-impeller and VFD (reduced-speed) applications.

The energy estimator program was used to determine the efficiency for a custom pump design since the assumed design point is at the BEP. However, the calculated efficiency, 77.5 percent, was not used since the Hydraulic Institute typical expected value for Ns ≈ 2,300 and flow (Q) = 100 gpm is about 66 percent. The BHP was then calculated by using the HI efficiency value.

As you have already pointed out, the inefficiency of a small, low-horsepower pump would hardly be noticed. So, for this less-than-1-horsepower application, ordering a pump with a trimmed impeller or trimming an existing impeller appears to be the most cost-effective solution.

For a higher-horsepower application, the annual operating cost may be high enough to justify the annual savings and payback period for using one of the above options or a different pump. A life-cycle cost analysis might be performed before deciding to change an existing system.

The original pump performance curve is reproduced here for readers’ convenience (see Figure 1). Points A, B and C denote the logic Lee used as described in his response.

Point A is the BEP of the original pump, and Point B is the operation at a reduced speed by the VFD. Lee applied affinity laws to first move the BEP at full speed (1,750 rpm) to get as close as possible to the required operating condition (the best that could be done was get to approximately 78 gpm [at 1,360 rpm]). He then had to move along that curve to Point C, reaching 100 gpm at 15 feet and 55 percent efficiency.

The Performance Calculator program Lee used is available at pump-magazine.com/pump_magazine/pump_magazine.htm.

As Lee noted, the program over-predicts the efficiency for small pumps as compared with the HI pump efficiency chart, because the friction losses at the packing box (or mechanical seal) are not considered by the program.

If these details were factored in, the predicted efficiency of a small pump would be similar to that of the HI chart. By applying the lower value of efficiency, Lee correctly added the mechanical losses within the pump resulting from the seal/packing friction.

As Lee correctly observed, application of the VFD for the purpose of energy savings would not be justified in this example.

To our readers: Can you provide an example that proves the opposite? In other words, can you describe a situation in which a VFD would save energy?