Most emissions escape through the valve stem.
by Mark Freeman
EGC Enterprises, Inc.
05/16/2019

Since the introduction of the U.S. Clean Air Act in 1963, the U.S. Environmental Protection Agency (EPA), as well as individual states, have set increasingly stringent restrictions regulating fugitive emissions from industrial facilities.

The consequences of these losses are far-reaching. They include the loss of product in terms of the cost of fugitive emissions, cleanup costs, loss of production time and labor costs to repair leaks.

The EPA monitors leak detection using “sniffing” technology. Although alternate test methods are being used, fines for falling out of compliance can cost some companies millions. So, reducing fugitive emissions not only protects the environment but also saves money for industrial facilities.

Recently, there has been a focus on replacing the “repair” in LDAR with a more proactive, preventative approach that focuses on valve design and low emissions (low E) performance at the manufacturing level.

The first in a series of embedded low E valve and packing standards is API 622, which was revised for the third time. This is a test standard for the packing itself. It uses a standardized test fixture and eliminates all the variable conditions inherent in each valve. By using a test fixture and a specified set of conditions, a variety of packing sets from multiple manufacturers can be evaluated under the same conditions.

The third edition of API 622 restricts leakage of the packing set to a maximum of 100 parts per million volumetric (ppmv), while eliminating the single previously allowed gland bolt adjustment. This edition also adds the requirement of an 1/8-inch packing sample test, which has been problematic in valve type testing, alongside the 1/4-inch packing, which has been used exclusively in all earlier revisions.

Currently, API 622 is a performance test. It runs a span of 1,510 mechanical cycles (from open to close) at 600 pounds per square inch gauge (psig) operating pressure over five thermal cycles. Measurements of test gas leakage (methane) are taken periodically throughout the test. 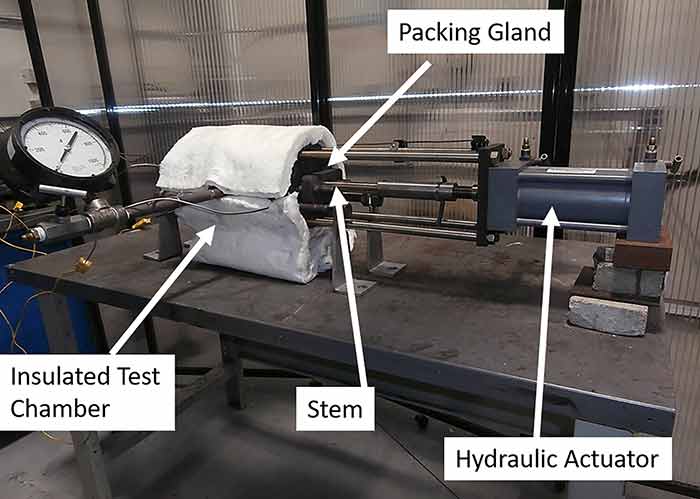 The test fixture is designed to resemble a 4-inch, 300-pound gate valve, using a 1/4-inch cross-section packing sample and a 4-inch stem stroke (or the distance traveled from fully open to fully closed, see Image 1). Stem diameter is 1 inch and box diameter is 1.5 inches for a 1/4-inch packing cross-section size.

This test fixture is detailed within the test standard so that every test, independent of location, can be compared and evaluated. Leakage of up to 100 ppmv is permitted. Leakage measurements are taken using an organic vapor analyzer (Image 2) to measure hydrocarbons and volatile organic compounds (VOCs). The test no longer allows one adjustment of the gland bolts if the packing set began to leak. 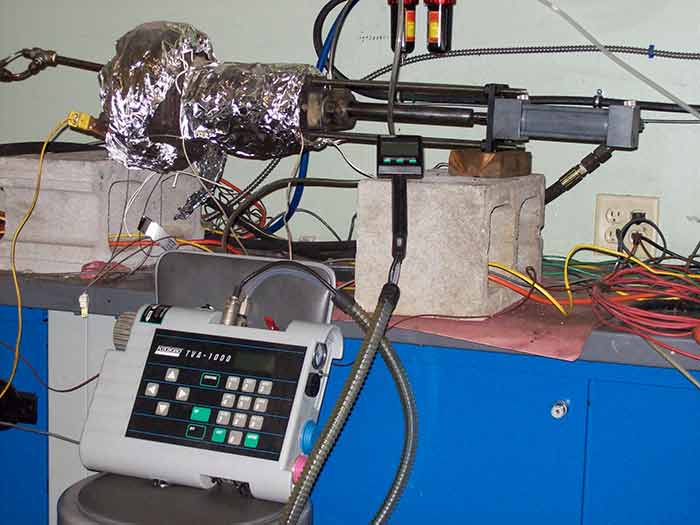 This is a test for the valve itself, including the stem packing. The intention of this test is to measure the low E capability of a valve over an accelerated lifecycle. API 624 is a valve-type test meant to evaluate the total performance of the valve itself and not the packing alone.

The packing used in an API 624 tested valve should be previously tested to measure up to API 622 requirements.

All the variables within a given valve design are being tested in API 624, while the packing has been proven to be, at least theoretically, suitable for use in a low E valve.

The test runs a span of 310 mechanical cycles at 600 psig operating pressure over three thermal cycles. All the while, periodic leakage measurements are taken of the test gas, which is specified as methane.

During the thermal cycles, the valve will run at ambient temperature for 50 cycles. The temperature is increased to 500 F, and the valve is cycled another 50 times.

Finally, the valve is returned to ambient temperature for a run of 10 cycles. Allowable leakage during this test is 100 ppmv at the stem and bonnet seal. No stem seal adjustments are allowed. If at any point the leakage exceeds 100 ppmv, the test is considered a failure.

The API taskforce is working on a new revision of API 624 and has expanded its line of valve standards by adding API 641 for emission-type testing of quarter-turn valves.

Mark Freeman is the marketing director for EGC Enterprises, Inc. For more than 25 years, he was CEO of Mark Freeman Advertising.