Even straight from the manufacturer, motors benefit from testing and monitoring.
by William Kruger
All-Test Pro
07/20/2017

It is common practice for motor reliability to build an inventory of spare motors and place them in storage for use at a later date. These “new” motors will remain on the shelf until needed, sometimes several years from the original purchase dates. When these motors are installed, they are given the run test. If they run they are considered good to go, and any issues in the motors are lived with, undetected or ignored. This is usually because the cost of removing and replacing these suspect motors can be high. Replacement may also require a plant shutdown; in these cases, plant operation dictates the action.

Considering the importance of these machines in the successful operation of these various plants, it’s surprising how little effort is spent verifying the condition of new and rebuilt motors. Many users assume that since a motor is new, it’s perfectly suited for service, but that is not always the case. Plants that routinely perform new motor acceptance testing report between 25 to 30 percent of new or rebuilt motors have issues. These issues may not prevent the motors from operating, but they often result in shortened lifespan, inefficient or less than optimal operation, frequent or repetitive failures, or increased operating or maintenance costs. 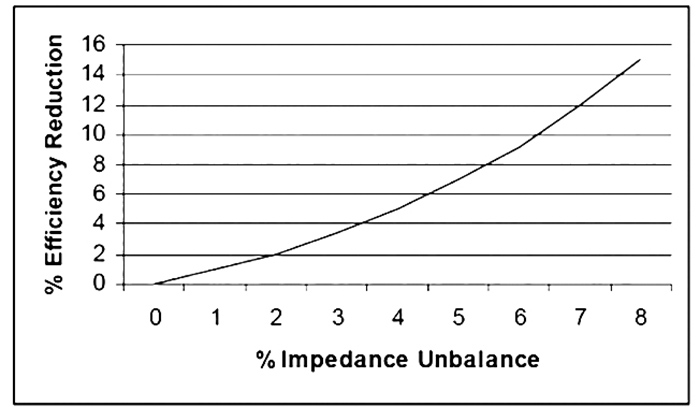 For example, Figure 1 shows that a 3.5 percent impedance unbalance on a 75-horsepower (hp) motor reduces the motor’s efficiency by 4 percent. If this motor operates at 80 percent load for 7,500 hours per year with a demand cost of $11/kilowatt and an energy cost of $0.07/kilowatt-hour, the excess cost of energy is approximately $1,200 per year.

Most plants operate with minimal maintenance departments, and skilled labor is at a premium. Once a motor is installed and operating, plants are satisfied to let it run unless it completely fails. Additional testing or replacing a motor before failure, are not usually considered. Remember, it takes the same amount of time to install a suspect motor as a good motor. So installing a motor without careful consideration when we know 25 to 30 percent of new motors have issues is not an efficient use of time. 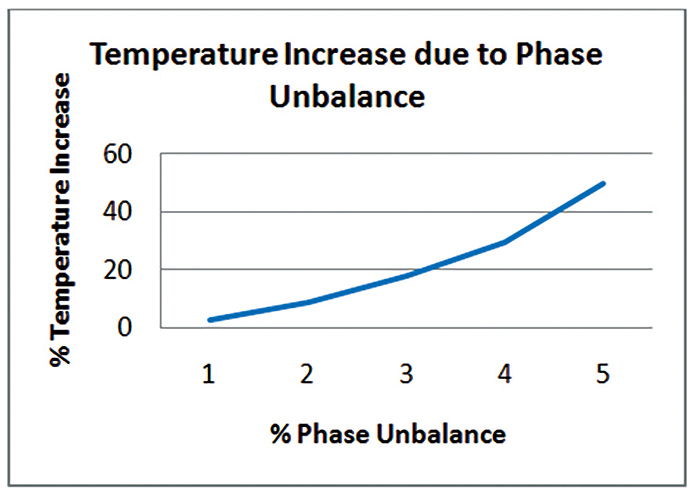 Electrically connecting a motor can take anywhere from 1 to 2 hours, and an additional 1 to 2 hours is required to align and couple the motor to the driven load. At a burdened cost of $50 to $75 per hour, the cost of replacing even a small motor can vary from a few hundred dollars to several thousand dollars.

Several years ago, a paper company determined the yearly average costs for maintaining electrical motors in the 5 to 150 hp range was $49 per hp per year. These costs are even higher on motors that have rotor problems such as a casting void, eccentric rotor or non-centered rotor. Existing or developing winding insulation issues or other winding issues that result in increased operating temperature also reduce motor life.

The average cost of three-phase induction motors less than 150 hp is approximately $100 per hp. If an untested new motor is purchased and placed in the storeroom for future use, sometimes for several years, and issues are discovered when the motor is eventually installed, any warranties may have expired and repair or replacement costs become the burden of the plant.

To minimize these costs and maximize the value and reliability of new motor purchases, many plants have implemented a de-energized motor acceptance testing program for three-phase induction motors using motor circuit analysis (MCA). These three-minute tests do not require specialized, highly trained personal but can be easily performed with any storeroom personal and instantly identify many of the winding and rotor faults that either create reduced reliability or increase high energy costs. Two simple de-energized tests (static and dynamic) can be performed when the motor is first received in the storeroom in less than three minutes.

The static test injects low voltage signals into each of the motor windings and then inputs the results into an algorithm that creates a test value static (TVS). This single number defines the condition of the motor windings and can be compared to similar motors to identify a motor with issues. A second dynamic test requires the motor’s rotor be rotated, slowly and smoothly to create a stator and rotor signature. Issues that occur in either the rotor or the windings will be quickly identified and the motor can be replaced with one that doesn’t exhibit these issues.

William Kruger is training technical manager at ALL-TEST Pro, LLC. He has worked for the company since 2005. For more information, visit www.alltestpro.com.

Motors
Understanding the Design Process for Motors & Drives
The complexity of pairing a motor with a VFD is a key point to consider, along with torque.
Instrumentation/Controls
IoT’s Role in Maintenance & Early Detection for Promoting Pump Health
Enhance monitoring strategies and avoid damage, downtime and more with the internet of things.
Instrumentation/Controls
How Industrial IoT Can Improve Monitoring of Remote Pump Stations
The shift from auto dialers to remote monitoring has helped users solve problems before they begin.
Instrumentation/Controls
The ROI of Motor Maintenance Measurements
Consider power factor and current unbalance when making decisions.
Motors
Making Sense of Motor Technical Data
Understand how this data is presented and how to make it become clear.