Determine the best calibration procedures for your facility.
by Marc Buttler
Emerson
04/06/2020

Calibration is an essential component of any manufacturing or industrial process. Without it, measurements have no real meaning, and consistency in product quality and process control, as well as efficiency, fall by the wayside.

But how does a facility establish calibration practices and benchmarks suited to their needs? What is needed to ensure that all systems operate in harmony across a facility or even a global operation?

First and foremost in any calibration process is traceability, closely followed by repeatability. In all instances, it is important to also consider that, while calibration happens in a tightly controlled laboratory environment, once a meter is put in the process there will be secondary effects that will further impact performance. The accuracy of the measurements while the meter is in service will depend on these effects and the meter type.

Maintaining rigorous measurement traceability to internationally held standards ensures that a facility’s most important tools for flow process control (i.e., their flow meters) will meet local, state and federal regulations, as well as their own strict, internal quality standards. Taking mass flow as an example, traceability is the chain of measurement standards going all the way back to the International Mass Standard as determined previously by the International Bureau of Weights and Measures (BIPM), and more recently by the adoption of Planck’s constant.

The first reason traceability matters is that it documents the paths by which everything ties to a single central starting point. The second reason is that traceability will allow a facility to understand and
apply the appropriate level of uncertainty in their measurements.

Understanding uncertainty through the documentation of traceability is critical to finding the right balance between the cost of uncertainty and the benefits to product quality and process efficiency that would be gained by investing more resources and effort into achieving higher levels of uncertainty. 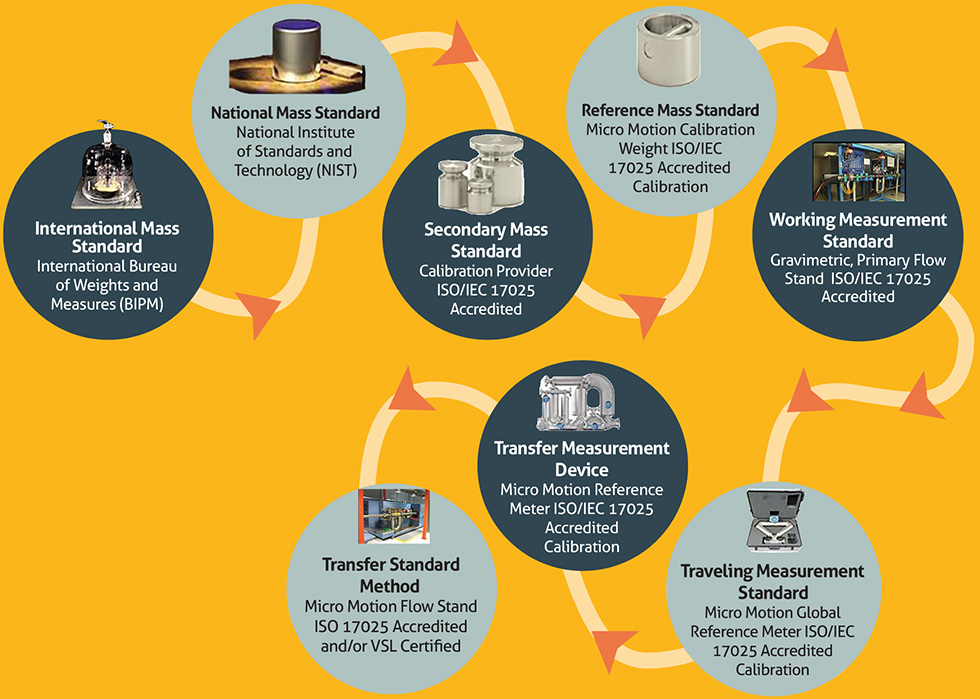 IMAGE 1: Example of a traceability chain (Images courtesy of Emerson)

An example of a chain of traceability is illustrated in Image 1. A valuable tool to help ensure traceability is accreditation. This is an example of accreditation to the International Organization for Standardization/International Electrotechnical Commission (ISO/IEC) 17025 standard “General Requirements for the Competence of Testing and Calibration Laboratories”—an officially authorized recognition of the traceability and uncertainty of a calibration link in the chain.

Several of the links in this example list ISO/IEC 17025 accreditation that helps to verify and streamline the documentation of the overall traceability chain for the final calibration step.

Until recently, all international measurement standards were tied to universal constants that can be found in nature, except for the mass standard, which was still based on a kilogram of platinum-iridium alloy that had been housed since 1889 at the International Bureau of Weights and Measures in Sèvres, France.1 This artifact is known as the International Prototype Kilogram, or Big K, or Le Grand K. There are copies of this prototype in laboratories around the world forged from the same piece of metal, including in the United States at the National Institute of Standards and Technology (NIST) in Gaithersburg, Maryland.

At the General Conference on Weights and Measures in Versailles, France, in 2018, members voted to tie the definition of a kilogram to a universal constant in nature.1 The change went into effect on May 20, 2019. One of the main reasons was because the Big K has lost around 50 micrograms since it was created, while still being defined as exactly 1 kilogram. The international standard for the kilogram is now tied to the Planck constant, a fundamental concept in quantum mechanics that will not change.

When it comes to mass calibration of a flow meter, that change will have an impact on the reproducibility and intercomparison of results from around the world, just as the kilogram is now a certain, set and stable constant.

Knowing the traceability of a calibration standard is important. However, how does the calibration procedure fit into the equation? The process of calibrating a meter requires a strictly controlled environment in which a device is put through a series of tests. 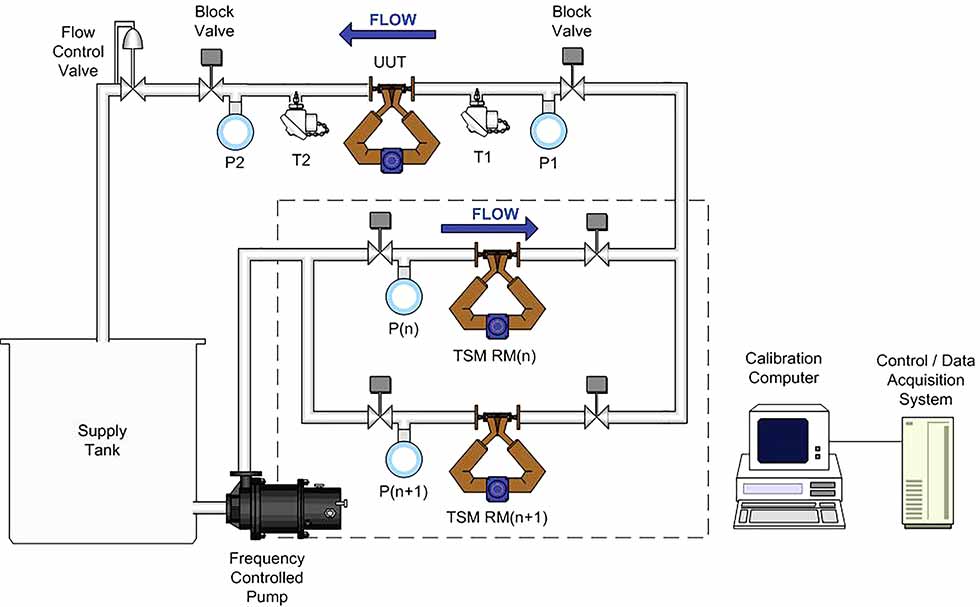 The transfer standard method (TSM) for calibration is a dynamic start/finish approach where the batch starts and ends at a steady flow. The calibration is performed in closed conduits and uses water as the test fluid. The water passes through the unit under test (UUT) and the reference meter (RM).

The RMs, two of them in this example, are also known as master meters and are known good meters initially calibrated on an ISO/IEC 17025 accredited primary gravimetric flow stand following the static start/finish method.

The TSM RM traceability is maintained annually using global reference meters for comparison testing. The mass total from the UUT is compared to the mass total from the RM by way of pulse counters, which are triggered on and off for both the UUT and the RM simultaneously. Fluid temperature and pressure are measured upstream and downstream of the UUT to ensure consistency and reproducibility of the process.

See Image 2 for a graphic representation of the TSM calibration process.

Static start/finish is a gravimetric calibration method where the calibration batch begins and ends at a no-flow condition. The reference used in this method is a weigh scale that has been calibrated using traceable mass standards and the test fluid is water. The tank is first weighed to determine the tare weight of the water that is already in the tank. Then water is measured through the UUT and collected in the tank. The tank is weighed again and the final weight, minus the tare weight, is compared to the total mass measured by the UUT. When better uncertainty is necessary, the mass shown on the scale is corrected for the effect of buoyancy acting on the water in the tank and the effect on any immersed pipe. 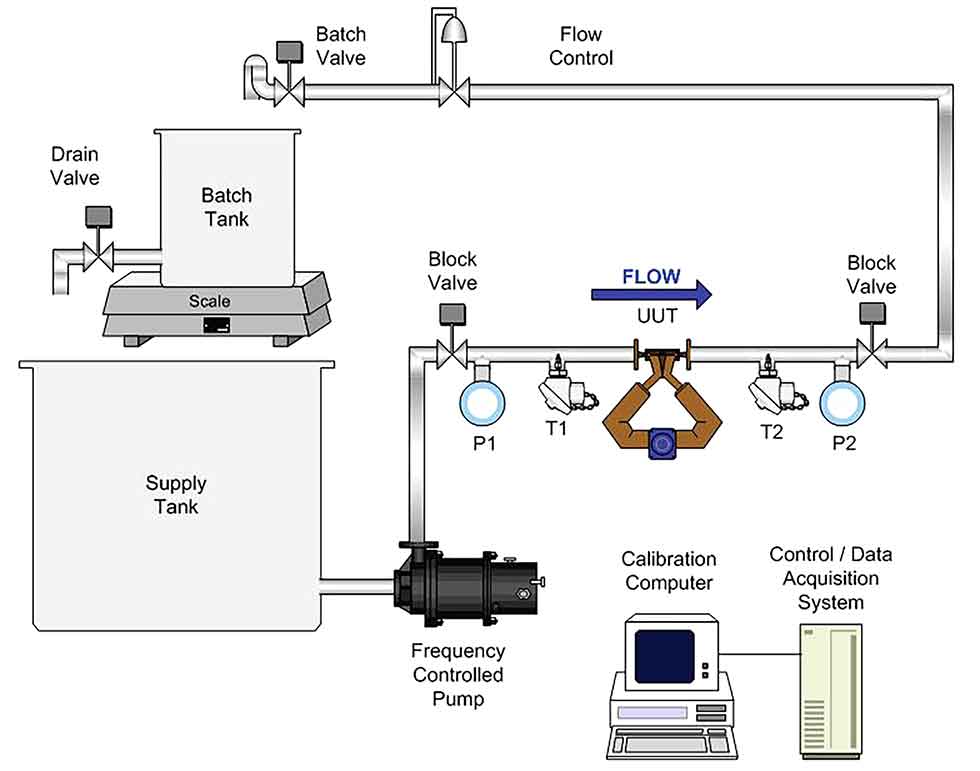 Fluid pressure and temperature are measured both upstream and downstream of the UUT. Ambient pressure, temperature and humidity are measured during each test. Image 3 illustrates how the static start/finish method works. However, it should be noted that this method is less efficient than the TSM method. So, it is only used to calibrate meters that have a purpose that justifies the tightest uncertainty possible over the less costly uncertainty of the TSM method.

It is under controlled conditions that calibration and traceability happen; however, what happens after a calibrated meter leaves the laboratory? This is where secondary effects add more uncertainty to the performance of a meter in the process the meter is used for.

Knowing the susceptibility of a meter to process effects and the traceability and calibration uncertainty that is provided by the manufacturer will help choose which meter to select for the processes. The reproducibility of established calibration results will determine the interval needed between future calibration cycles and will help to ensure consistent product quality.

Understanding how a meter will perform in service will help in choosing the right meter. It will also help determine how much to spend on calibration so that the best possible measurement for the process, for the least amount of cost, with the least amount of effort, is achievable.

Confidence in the measurements is a key step on the path to true process quality control.

Marc Buttler is the oil and gas application innovation director at Emerson for Micro Motion Coriolis flow meters. He holds a bachelor’s degree in mechanical engineering from the University of Colorado. He is active with the American Petroleum Institute committee on petroleum measurement and with the National Conference of Weights and Measures. For more information, visit www.emerson.com.