The material stands up to pump upsets such as cavitation and dry running.
by Robert Cook (Lancer Systems)
09/12/2014

Minimizing pump downtime directly affects the bottom line. Sealless mag-drive and canned-motor pumps, commonplace in the petrochemical and power industries, enhance reliability and reduce emissions and leakage compared with more traditional “sealed” pumps. The choice between sealless and sealed pumps often involves savings in both time and money. Making the right choice can also affect the overall health and reliability of operations.

Sealless pumps use sleeve bearings typically machined from carbon graphite or sintered silicon carbide (SiC). The hardness of these materials allows them to withstand wear during the pumping of aggregate solid media. However, the limited dry-running performance of carbon graphite relegates its use to systems with minimal loads and constant lubrication.

SiC bearings have excellent tribological performance, wear resistance and chemical resistance, but suffer from catastrophic brittle fractures. The bearings cannot absorb the shocks and vibrations encountered during pump upset conditions. Both carbon graphite and SiC are vulnerable to thermal and mechanical shock, leading to fracture and ultimately bearing failure.

The CMC is composed of a fiber-reinforced material with either a silicon oxycarbide or silicon carbide matrix. Surface, bulk and tribological properties can be tuned through fillers and fiber surface treatments, tailoring the engineered material to specific applications. For example, the composite’s low thermal expansion coefficient can be controlled by modifying bulk crystallinity, internal fiber type and fiber architecture. In a bearing application, the modified engineering material can be used in direct contact with stainless steel shafts, mitigating the need for metallic tolerance rings to create an interference fit.

An internal-circulation Teikoku USA Inc. G-362 canned-motor pump from Warminster, Pennsylvania, with a Stellite 1 coated rotating shaft served as the test equipment (see Figure 1). The process fluid was an ambient aromatic hydrocarbon with a viscosity of 3.0 centipoise (cP) and a discharge pressure of 100 pounds per square inch (psig). The test’s CMC bearing assemblies were supplied per the manufacturing drawing and consisted of a machined CMC core heat-pressed and pinned in a steel carrier (see Figure 2). 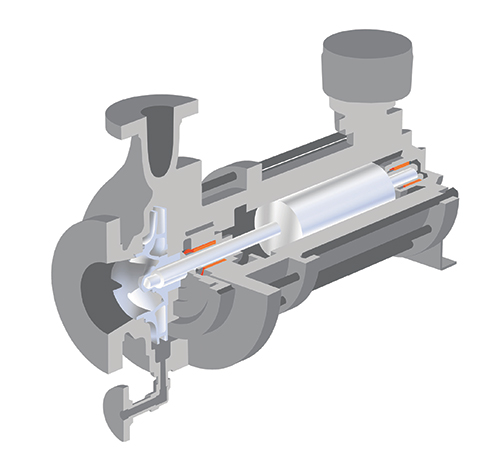 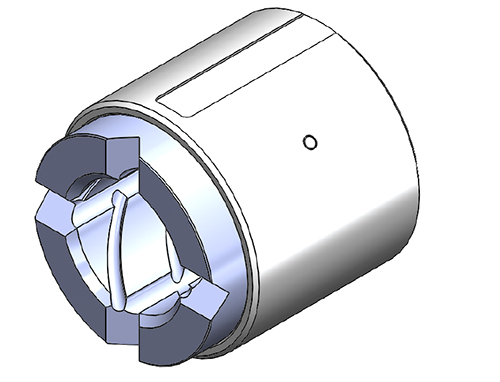 The CMC bearing set, defined as both the front and rear location carrier assemblies, were subjected to the following test in four stages. The first stage ran the pump with the CMC bearings for six hours to ensure no immediate issues. The second stage ran the pump under normal operating conditions for 30 days. The process fluid was recirculated to ensure the pump ran for at least 40 hours per week. The pump was disassembled, inspected, measured and then rebuilt after the 30-day test. The total pump run time was 171.75 hours.

The third stage put the pump under controlled cavitation for eight cycles of five minutes each. The cavitation cycles were controlled and induced by inline valves approximately 5 feet from both the suction and discharge. Pump cavitation was induced at a moderate level and then increased. The pump was disassembled, inspected, measured and then rebuilt after the cavitation test.

In the fourth and final stage, the pump was initially run dry for a short duration. The pump was then started under normal operating conditions, followed by process fluid being blown out of the pump. The process fluid wet the bearings without flooding them. After the dry run, the pump was primed and brought back to normal operating conditions simulating thermal shock conditions. The dry run lasted approximately eight minutes; stabilization took approximately 14 minutes.

A longer dry run followed the short dry run. The pump was brought to normal operating conditions, and the suction line was shut off completely. After the dry run, the suction valve was opened, and the pump was brought back to normal operating conditions to simulate thermal shock. The pump was then disassembled, inspected, measured and rebuilt after the long dry run test. The dry run lasted approximately 21 minutes; stabilization took approximately five seconds.

Table 1 shows the results of the four-stage test. The first two stages of the test ensured the CMC bearings would perform functionally under normal working conditions. No noticeable wear occurred on the steel carrier OD or the CMC ID after the 30-day test, comparable to the OEM bearing and in line with performance expectations.

The third stage monitored the effects of repeated cavitation on the CMC bearings, a known point of failure for the OEM bearings. While the front and rear steel carrier had worn by 0.001 inch, neither CMC bearing displayed measurable wear or structural instability. These results were in line with the clearance measurement, which showed only a 0.001-inch growth.

The fourth stage monitored the effects of extended dry-run conditions on the performance of the CMC bearings. While the steel carrier and CMC bearings wore by an additional 0.001 inch each during testing, the bearings remained structurally sound and continued to operate under dry-run conditions. Inspection of the bearings after pump disassembly revealed both bearings to be completely intact, with no evidence of fracture or thermal shock damage (see Figure 3). OEM carbon-graphite bearings fail catastrophically during similar testing. 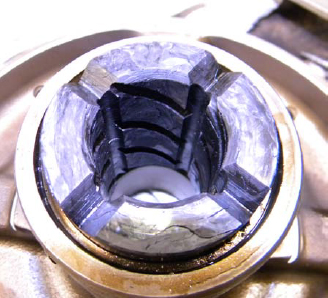 The CMC bearings displayed excellent thermal shock resistance. High temperatures during prolonged dry runs resulted in no damage to the bearing, which quickly cooled in ambient process fluid. The CMC bearings and rotating shaft experienced a minimal increased clearance of 0.003 inches over the original clearance of 0.006 inches after the four-stage test.

After the test, CMC bearings were installed in four canned-motor pumps at the JX Nippon Chemical Texas Inc. facility. The bearings have performed without incident for more than two years. Historically, OEM carbon graphite bearings have been replaced every three to five months after failing in severe service duty locations. The CMC bearings’ performance life increased five to eight times compared with the carbon graphite bearings.

Dr. Robert “Bobby” Cook obtained his Ph.D. from the University of Southern Mississippi specializing in the processing and characterization of high performance nanocomposites. He currently serves as the senior materials engineer and ceramic matrix composite technical lead at Lancer Systems in Allentown, Pennsylvania. His primary focus has been the development of application-specific CMCs for aerospace, defense and industrial applications. He can be reached at rcookjr@lancer-systems.com or 610-973-2658.