A conservative approach was taken in choosing technologies for pumping abrasive slurries over long distances.
by Rick Kesler
ABEL Pumps
10/05/2017

Nestled into the front range of the Rocky Mountains, right below Pikes Peak and about 80 miles south of Denver, is the home rule municipality of Colorado Springs. As of 2016, Colorado Springs claims the 40th largest city population in the United States and the second largest in Colorado. In addition, the city has grown by nearly 12 percent since 2010. Colorado Springs Utilities, the primary utility service for the its metropolitan area, is one of the largest utility services in the country and handles not only water, but waste treatment, gas and electricity. Colorado Springs constantly requires improved methods to supply fresh water and protect downstream users of treated water. Colorado Springs Utilities operates three wastewater treatment plants in the metropolitan area and includes laboratories on each site. Each lab analyzes thousands of wastewater samples per year for process control and regulatory compliance.

Colorado Springs Utilities’ first wastewater plant was the Las Vegas Street plant, which is governed by the City Council Utilities Board. In 1984, the Hannah Ranch facility, now called “Clear Springs,” was built to further process plant product from Las Vegas Street. At first, biosolids were trucked across town, deposited in pits and covered. By 1985, an 18-mile pipeline was laid between the two facilities so biosolids could be more effectively transferred from Las Vegas Street to Hannah Ranch. Two pipelines were put down with the intention to transport reclaimed water back through the second pipe; however, this intention was never fulfilled, as other uses were found for the reclaimed water. The biological treatment used today involves standard processes of aerators, activated biosolids and clarifiers. Chlorination and sulfur dioxide are used to neutralize treated water before it is discharged. At peak capacity, the Las Vegas Street plant pumps 54 million gallons of biosolids per day (mgd).

Brown & Caldwell designed the pipeline system and investigated various pump technologies to meet the performance criteria. Data was scarce on pumping biosolids this distance, so precautionary procedures remained conservative. In the 1980s, measuring tools were not as accurate, and the variation in data increased as the piping distance increased. Estimates were made based on known relationships of viscosity, flow, friction loss and such rheology of municipal biosolids to ensure sufficient power and capacity would be available. To cover the scope of the variation, Brown & Caldwell needed to select a pump with a maximum flow rate and pressure significantly higher than the required values estimated. A membrane piston-diaphragm type pump was selected as the best available technology for the job with rated flow capacity to 400 gallons per minute (gpm) and pressure capability up to 400 pounds per square inch (psi). In actual use, however, the operating pressure only varies between 150 to 175 psi.

Two piston-diaphragm pumps were originally installed, and a third was added in the mid-1990s. The pumps use two double-acting pistons that drive hydraulic fluid against elastomeric diaphragms. This arrangement balances the pressure differential across the diaphragm, allowing the pump to move abrasive slurry at high pressures. The pump has four diaphragm heads. Elastomeric ball check valves modulate flow into and out of the pump with minimal wear. These hydraulic diaphragm pumps run at efficiencies of about 86 percent, and depending on the model, permit pressures up to 3,200 psi. The pumps are supplied with gear sets for stages of pressure ratings, the lowest of which is 232 psi. Subsequent gear sets use smaller diameter pistons as pressure ratings increase. 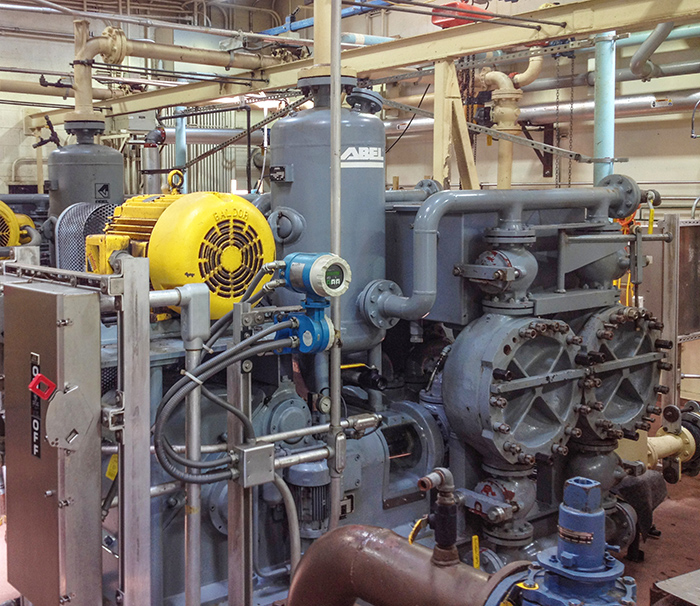 In the early 1990s, plant personnel looked for other positive displacement pumps that could replace existing pumps, which had wear issues from the abrasive biosolids. Many pumps have been replaced by the more forgiving electric-diaphragm pumps on primary sludge, dissolved air flotation (DAF), and other thickened sludge locations throughout the plant. DAF is a water treatment process used to clarify wastewater in industrial processes to remove suspended matter such as oils or solids. Air is dissolved in the wastewater under pressure, then the air is released at atmospheric pressure in a flotation tank basin. Tiny bubbles are released, which adhere to the solids causing them to float to the surface where they may be removed by a skimming device such as paddles.

Additional electric-diaphragm pumps were added on thickened biosolids service with similar results. Due to the success of the electric-diaphragn design at Colorado Springs Utilities, more than 50 of these pumps have been selected for service and are in operation within the city’s three plants.

Rick Kesler has bachelor's and master’s degrees in metallurgical engineering from the Colorado School of Mines, and has worked for mining and mining equipment companies. He is involved in sales management and applications with ABEL’s North American group. He may be reached at rkesler@abelpumps.com. For more information, visit abelpumps.com.