In municipal applications, operators must understand which technology will best meet their needs.
by Ron Aceto
Cornell Pump Company
10/05/2016

The increase in solids content, primarily a result of disposable or “flushable” cleaning wipes, is creating modern waste stream problems that are different from what municipalities faced a decade ago. Cleaning wipes and other materials are infiltrating the waste stream through industrial and stormwater overflow.

Most municipalities are now experiencing damage to equipment that was installed before these adverse plugging conditions became so prevalent. The damage often costs tens of thousands of dollars per year for smaller communities—and this price can climb into the millions for larger metropolitan areas. The losses can come from equipment damage, increased energy consumption, deferred maintenance and increased staff time.

The problem of wipe ragging is endemic throughout the country. According to a March 13, 2015, New York Times article about flushable wipes, New York City from 2010 to 2014 spent more than $18 million on wipe-related equipment problems, and the number of wipes in the city’s waste stream more than doubled.

Southwest Washington’s Clark County Regional Water District, which serves a population of about 90,000, exemplifies the challenges this sewage composition is posing for municipalities. Clark County was paying more than $80,000 per year for wipe-related cleanout and increased energy consumption prior to the installation of cutter pumps.

While a national tally of costs for the U.S. is difficult to find, the Canadian government estimates that wipe ragging costs its municipalities at least C$250 million per year (US$176 million). Canada’s population is a tenth the size of the U.S.’s, so it could be reasonably extrapolated that American taxpayers pay US$1.7 billion per year in wipe-related energy consumption and plugging costs.

In the last 10 years, however, clogging instances have increased by more than 200 percent compared with the previous decade, according to the Water Environment Federation (WEF).

For more than 100 years of municipal wastewater pumping history, solids-handling capabilities had been based on passing a spherical solid of a specified diameter. In an often-replicated show of a pump’s ability, an original equipment manufacturer (OEM) would demonstrate passing a baseball or other similarly sized object through a pump to visually indicate how that particular type of equipment could handle 3-inch solids.

Today, wipes, rags, greases and other materials rope together, creating 6-foot-long (in some instances, much longer) masses wound into a clot of fibrous rags. These rag ropes can bind around an impeller or plug before a suction, making it impossible for them to pass through a wastewater design that may have worked successfully for generations.

Increasing clogging problems make it apparent that typical non-clog pumps are no longer the solution in many cases. In numerous applications where the pump suction inlet is greater than 10 inches or where the waste stream is relatively free of wipe products, centrifugal solids-handling pumps remain a viable choice.

But in more aggressive applications—which are becoming increasingly common—it is necessary to reduce the size of the solids entering the pump through some form of chopping, cutting or grinding.

A number of equipment options can manage these tougher applications. These options include pumps designed to chop up harder solids, cut or shear stringy materials, or grind sewage in the primary stages of the system. The following pump types are commonly used in these aggressive solids-handling applications.

This configuration breaks up solids to a manageable size, allowing the materials to pass through a standard solids-handling impeller. The chopper blades break up solids as they pass across the bars before entering the pump suction.

This is an effective design for solids reduction, although the external element can affect the pump’s net positive suction head required (NPSHR) capabilities and efficiency. Chopper pumps have proven to be effective in handling heavier and harder solids because of their robust design.

Cutter Pumps
Cutter pumps are designed to achieve the same goal of solid size reduction. In cutter pumps, the impeller is the device that drives the rotating cutting action, while the stationary element is mounted at the pump’s suction inlet.

The stationary cutter is often a fixed ring with cutting teeth or a knife-like blade that shears materials entering the impeller eye, allowing ragging components to pass directly into the pump.

There is less restriction at the inlet of the cutter pump compared with a chopper pump. Cutter pump NPSHR and efficiency generally are better than that of chopper pumps because of the pump design, but the trade-off is that cutter pumps do not handle larger, harder solids as easily as chopper pumps. Cutter pumps have proven to perform well in applications where long, stringy materials are present, and the pumps are hydraulically efficient.

Grinder Pumps
Grinder pumps also use an impeller designed with a rotating cutting device that macerates materials at the pump inlet. This pump type typically is found in lower-flow applications. Many grinder pumps are a submersible design, run at higher speeds and mainly are installed at the source of supply to the main sewage system (for example, commercial buildings, hotels, hospitals and other institutions).

Smaller grinder pumps can break down materials, reducing maintenance costs for building owners at the source of supply. 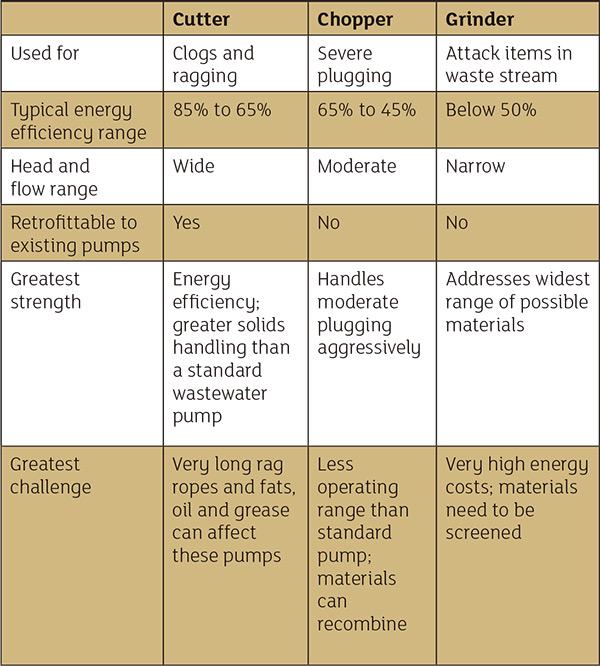 Many factors can affect how efficiently a system operates. Maintenance costs are an important part of a system’s efficiency, especially compared with the energy efficiency of a pump. This involves mean time between failures resulting from clogging issues and man-hour costs to address these issues.

The inlet velocity requirements of a decade ago, when solids were 3-inch spheroids/biological solids, no longer hold true. Large pieces of rag material, laden with grease and grit, settle out differently in piping systems and require greater velocities to carry them into a pump’s cutting element. Fluid velocities that previously would have propelled a biological mass, such as 2 to 3 feet per second, are no longer sufficient to move heavier materials through a piping system. Velocity must increase to meet system demand and allow a chopper, cutter or grinder pump the best chance to work effectively.

Pumps running at slower speeds during periods of low demand, such as the middle of the night, often exacerbate plugging issues. The problem lies in the buildup of material in the inlet pipe, creating additional friction loss, reducing NPSHA and eventually clogging the pump inlet.

Today, municipalities are designing a number of new plants for combined sewage and storm infiltration or even with future population growth in mind, a factor that will contribute further to the increase in material wastewater that equipment will have to handle.

Public education about the dangers of wipe products, legislation to reduce the amount of infiltration and the addition of removal equipment are long-term solutions to this growing problem. To select the most efficient and effective pumps for their applications, operators must understand their systems and ask questions about what equipment will best meet their needs.

Ron Aceto is the municipal market manager for Cornell Pump Company of Clackamas, Oregon. He has worked almost 40 years in the pump industry with extensive experience in the commercial, industrial and wastewater markets.

Pumps
How to Mitigate Pump Motor Damage
One option is to use a reduced-voltage soft starter
Pumps
Wall Street Pump & Valve Industry Watch, October 2020
Pump Market Analysis
Pumps
Piston-Actuated Diaphragm Pumps in Mining
Learn the pros and cons of these pumps that can move fluids and slurries with high temperatures.
Pumps
5 Sessions You Should Not Miss at WEFTEC
Take a look at these technical sessions to boost your virtual experience.
Pumps
What Pump Selection Considerations Are Needed To Handle Wastewater?
The type of material in the fluid should be considered when selecting a proper pump for wastewater treatment.