The Cost of Clean Water

It is essential to the production of electricity and other energy, to agriculture and industrialization, to comfort and progress.

But in a world of climate change and population growth, a world in which natural and man-made disasters demand better, smarter and more sustainable technologies, the availability of water and energy will determine the future of life itself.

Will there be enough?

As we face this monumental question, government regulators, industry leaders and citizens of the world are beginning to think differently. Energy and water systems have historically been developed, managed and regulated independently and solutions have been considered separately.

Today, there is a growing understanding of the natural nexus between water and energy. To find sustainable solutions, we must start with the basics. We all know the price of a gallon of gas, and we track this cost daily.

But what is a gallon of water worth?

"Most people don't have a common tendency to place a value on water," Xylem President and CEO Patrick Decker said. "This is becoming more and more understandable by our policy and thought leaders around the world that some of the biggest demands on the environment in terms of energy production are the demands placed on water and the scarcity of water.

"In many areas where oil is the most abundant, water is the most scarce. It is simply not going to be sustainable until we have as much of a focus and debate around the value of water—whether that be sources of clean water, the climate of the energy cycle or management of the wastewater."

An integrated, strategic approach can guide technology research, development, demonstration and deployment (RDD&D) to address regional water-energy issues and also make national and global impacts, according to a 2014 report from the Department of Energy ("The Water-Energy Nexus: Challenges and Opportunities").

The World Health Organization predicts that by 2050 two-thirds of the nearly 10 billion people on Earth will live in developed cities, which will create great pressure on global energy and water resources.

In the Middle East, produced water from oil and gas operations wastes more than 73 million barrels per day. In regions characterized by unconventional production of oil, such as tight oil and oil sands, a single well can require up to 5 million gallons of water.

"This is clearly not sustainable," Decker said. "We need resilience for water infrastructure. Water variability is resulting in a rising economic risk for communities around the world. Floods disrupt power plants, oil refineries and other critical energy infrastructure. Managing the movement of water around energy facilities during these times is crucial for maintaining resilience. In arid environments, there are some no-regret moves that can immediately be made, such as water reuse. These are common in the Middle East, Singapore, Australia and the U.S. Reuse can help close the gap between supply and demand." 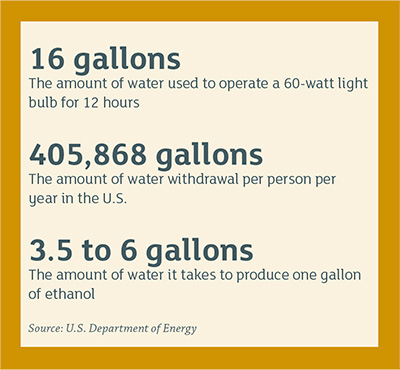 The Role of Technology

Energy sustaining partners should realize the need for less stringent thinking in terms of technology.

"With regard to pump-related technology, the key is energy efficiency and having more data to measure the efficiency. And we need to use partnerships to accomplish this," Decker said. "Partnering is the ultimate catalyst to create water security for the world."

"We enter a vicious circle," Bosbach said. "Renewable energy sources need water. Plants for biogas production need irrigation. Wind generators have to be cooled. Water production and energy generation both depend on each other and the use of resources."

Pumps account for 20 percent of the global energy demand. Energy efficient pumping systems reduce the impact on both energy and water consumption.

"Higher efficiency at machine level (new motor design, new pump design, speed control), combined with the even larger leverage effect of pump system optimization is the logical response here and will reduce the impact on our environment," Bosbach said. "The water-energy nexus will force us to change the types and sizes of pumps we are using. The waste of water in the energy generation process has to be reduced by water recycling and reuse."

This means, for example, fewer intakes from the sea or rivers, improved circulation concepts with a high level of optimization and local water treatment as an integrated step in reusing water, Bosbach explained. "In industrial processes for chemical products, there is progress in optimization from sealing water circuits to zero liquid discharge. Energy generation will, and has to, follow suit."

"There is no one single technology that is going to solve all the issues here. We need to partner together and realize that we all have some level of risk aversion. None of us wants to make changes with technology that will put our public health at risk. Having greater cooperation and opening the research capabilities together and having trust in the partnerships is key. Education and awareness will also be difference makers."

Sustainability is the Future

"Sustainability is not just our future—it is our present," he said. "We are shifting away from an old-model of consumption toward sustainability. Sustainability is a must in the water sector, thus our focus needs to be in how to accelerate it. First, we need policy and regional agreement that encourages sustainability. Second, financial and economic incentives for corporations that promote sustainability are needed. Third, we need to share technology and innovation and support continued involvement in regional policy."

Learning from Other Regions

In reaction to the recent droughts in California, there is a lot of talk at the federal level in the U.S. about the growing importance of water infrastructure, Decker said. "But utilities are local, and water is always a global issue. Unfortunately, it's only when the crisis occurs that we get a meaningful dialogue. What's happening in California right now is all about the appropriate pricing of water, the regulation of water—especially on the industrial side—and it's all about water reuse."

Climate change in Australia has generated action in the way the people in that region think about water, says Adam Lovell, Executive Director, Water Services Association of Australia (WSAA). Parts of Australia have declared regulations in which people do not use water one day a week or at certain times of the day. By 2022 Perth will be a climate independent city in terms of water supply, desalination and plans of reuse for agriculture.

"Water efficiency for residential customers has dropped from around 350 liters per person per day to around 200, and that's without restrictions," Lovell said. "Customers in Australia have now locked in their behavior and they see this as a permanent way of treating water positively."

Politics often get in the way, Lovell said, but the Australian government has enacted policies at the local and federal levels that have made an impact, including a labeling scheme in Sydney, which requires all appliances to have a water efficiency label indicating compliance with minimum standards. Manufacturers cannot ship equipment to Australia that does not meet the standards.

It is often cheaper on a total life-cycle cost basis and can be a more energy efficient alternative to lower energy costs and greenhouse gas emissions, Decker said.

"A perfect example here is the Kuwaiti government demonstrated forward-thinking in this area by building the world's largest reuse and reclamation facility. We used our suite of products to help them build that capability which now has an expansion plan underway. The projections are that this plant will generate $11 billion in cost saving benefits for the Kuwaiti government over the lifetime of the project."

"Every oil field is different, and every one of them has a different quality of produced water," explained Anna Halpern-Lande, Senior Management Upstream Business Development, Shell, Netherlands.

"Oil operations are both big users and big producers of water. Often, water is injected into the drilling well to maintain the pressure needed to produce the oil. We also have large camps that are fully-funtioning cities that have potentially 5,000-10,000 people living there who are using water and producing wastewater."

"By working with regulators on a case-by-case basis, we can create ways to take water into the next reuse, and we can determine how we can use these assets in a circular way," Halpern-Lande said.

Budgeting the Use of Water

"Given the current water scarcity in our region, which will only be exacerbated by growing population and dwindling groundwater reserves, 'business as usual' is not a satisfactory response," said H.E. Razan Khalifa Al Mubarak, Secretary General, Environment Agency — Abu Dhabi (EAD), UAE. "What we need is 'business as unusual.'"

The GCC is now discussing the concept of a water budget, at the heart which is the principal that a fixed volume of water per person will be specifically determined. This should create a decent sustained supply in the long term, and the GCC population must find ways to live within this predetermined amount, Her Excellency Al Mubarak explained.

"Unlike the 'business as usual' model, we must not continue to meet increasing demand by increasing supply. Of course, this does not mean that our population and our economy cannot grow. It simply means that we must be more productive, more competitive and more efficient in the ways we use our water. We must think carefully and debate about how we allocate our water by developing a sophisticated system that recognizes scarcity.

“This broad switch—a mental switch—from the continuous reliability on conventional desalination to greater efficiency and greater water reuse will have substantial benefits in terms of health, environment, reduction of carbon dioxide emissions and other air pollutants.”

Forty percent of the world’s population is expected to live in water-scarce regions by 2025. Globally, 70 percent of water sources are used for agriculture and irrigation and only 10 percent for domestic use. It is a natural connection that 1.3 billion people have unreliable or no access to electricity.

In simple terms, the water-energy nexus is the relationship between how much water is used to generate and transmit energy and how much energy it takes to collect, clean, store and dispose of water. Shortages and supply disruptions to one directly impacts the other.

Managing water and energy as an integrated system will unlock water-energy synergies and reduce consumption of both.

Many challenges and opportunities exist—for example, hydraulic fracturing in North America where the management of water in and around that technology is critical. In the mining industry, there is more money spent on getting water to and from the mining site than there is on the core mining operation, Decker said.

“We look at this as an opportunity to create social and economic value, not just through the obvious role that pumps play—which is the efficient movement of water, whether it’s getting it out of places it shouldn’t be or getting it to places where it is needed.

“The energy efficiency aspect of pumps is important because the pumps themselves demand so much energy consumption. It’s also about the treatment and the testing of the water, both before and after its use in the energy cycle. Summits around the world will continue to raise the consciousness of energy as it relates to water, which is arguably our most precious resource.”

How to Address the Water-Energy Nexus