The Cost of a Misbehaving Pump

Chronic problems are rarely solved unless the underlying issue is addressed. Often in pumping systems, diagnosing these problems is difficult and it may not be the first culprit suspected. Here, a paper mill was able to reduce operating, maintenance and capital costs while increasing system performance by fixing a chronic maintenance problem.

In addition to the pipe cracking, there was severe movement of the discharge pipe, along with excessive pump vibration causing additional damage. After years of dealing with the issues caused by ongoing vibrations and cracking in other parts of the mill, plant managers decided it was time to correct the problem.

Time-consuming and costly hit-and-miss diagnostics were initially used to determine the root cause of the issue. The primary problem to address was the extensive cracking in the pump-discharge piping system. The mill reasoned it was due to thermal stresses caused by rapid heating of the discharge piping during plant startup. As a result, the focus on plant modifications to reduce the rate of temperature change during plant startup was the first initiative. Second, the team determined it was necessary to look for ways to minimize the pump vibration and bring the pump maintenance cost in line with similar pumps in the plant.

Their first efforts in correcting the cracking problem by minimizing the rate of temperature change in the discharge header were not effective. After a false start, management decided to look at the operation of the piping system. 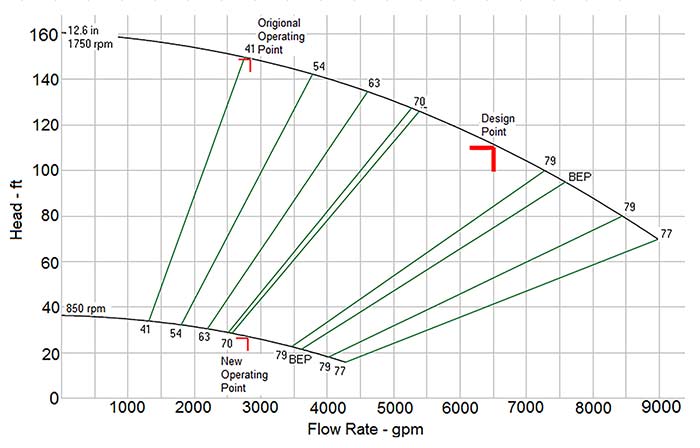 Image 1. The manufacturers’ supplied pump curve for the vat dilution pump operating at both 1,750 rpm and 850 rpm. The initial pump specification had a pump speed of 1,750 rpm with a design point of 110 feet of head at 6,500 gpm. The pump curve at 850 rpm is displayed. (Image courtesy of the author)

Discovering the Root Cause

After careful review, the team decided to focus on the interaction between the pump and its system. The pump was initially specified for a 6,500 gallon per minute (gpm) flow rate and 110 feet of head. It was supplied with a 250-horsepower (hp) motor running at 1,750 revolutions per minute (rpm). The best efficiency point (BEP) for the installed pump occurred at 7,900 gpm (see Image 1). Looking at the operation of the vat dilution system using piping software, it was discovered the required flow rate was only 2,800 gpm. Running at this lower flow rate resulted in the pump operating below its original design point and far to the left of the BEP flow.

After performing an analysis of the entire system, it was determined the pump was oversized both in the specified flow rate and pump head. The results of the study determined that the system required only 26 feet of the pump head to meet the 2,800 gpm flow requirement of the vat dilution system.

To better match the pump to the system, a variable frequency drive (VFD) was installed. With the pump operating at 850 rpm, the pump was able to meet the flow rate of 2,800 gpm with the required system head. The pump operation at 850 rpm is displayed in Image 1.

At the lower speed of 850 rpm, the pump is able to meet the system flow and head requirements by consuming only 70 hp. This reduction in speed resulted in a 60 percent savings on the cost of power to operate the pump. The lower power requirement at the slower speed also allowed for the use of a low-voltage motor and VFD, resulting in significant savings.

Using the plants low power cost of $0.025 kilowatt hours (kWh), installing the VFD resulted in a calculated energy savings of $16,500/year. Based on the cost of the VFD and the savings in energy consumption, the project had a return on investment (ROI) of 20 months.

To project future maintenance savings when evaluating a pumping system, there is 100 hp less power going into the fluid in the system. That extra 100 hp supplied by the pump, due to running at a higher speed, was removed from the fluid by using an over-throttled control valve. This also reduced wear and tear on system components. Another way of looking at the system is the excess power was wasted, pushing more energy than necessary, operating the equipment at a higher threshold, causing more stress on the equipment thereby increasing the maintenance costs.

Lastly, looking at the pump curve, we can see that when the pump is operating at 850 rpm with a flow rate of 2,800 gpm it is operating much closer to the BEP. Running a pump closer to its BEP has been proven to increase pump reliability.

By factoring the documented maintenance savings into the power savings the ROI for the VFD was reduced from 20 months to 10 months. For the past five years, the only maintenance performed on the vat dilution pump had been routine preventative maintenance.

With the system operating with fewer repairs, there were additional savings due to increases in system uptime. Just like maintenance savings, increases in plant uptime are difficult to project.

In our vat dilution example, once the VFD was installed, the cracking in the pump discharge header and excessive pump maintenance was eliminated, and as a result:

Based on actual plant data, the forced shutdowns caused by the problems associated with the vat dilution system cost the plant $400,000/year in lost production. When the cost of the lost production was factored in, the payback for the VFD addition was three weeks.

Remember, this pump system assessment was performed to fix a chronic problem that plant management was tired of dealing with. By evaluating the system, they were able to discover the root cause of the problem, make the necessary improvements, and based on the records they were able to document the savings. This is just one of many systems in an integrated paper mill.

By performing this assessment, the plant had several takeaways:

By analyzing the entire system, the plant was able to resolve a long-standing maintenance problem that normal spreadsheets and day-to-day troubleshooting simply did not uncover. Once the operating data became apparent, they were able to quickly resolve the issues, make system improvements and reduce exposure to increased maintenance issues caused by the original problem. Lastly, management had the added benefit of improving their bottom line, coupled with a short ROI on the cost of the improvements making their investment a solid choice.

Dominik Fry, P.E., is Engineered Software, Inc.’s business development engineer and has nearly a decade of experience in the energy industry while working on some of the nation’s largest energy projects. Fry earned a Bachelor of Science at Montana State University. For more information, visit www.eng-software.com.