Centrifugal pumps are one of the world’s most commonly used machines. Every day, test labs evaluate their performance. Most of these pumps have been designed to transport fluids or create pressure in an industrial process. Therefore, the most important measurements include pump pressure (head), flow and power, and maintenance and environmental factors—such as vibration, sound levels and operating temperature.

What should the test engineer consider when the main purpose of a pump is not the movement of fluids—but the transport of rocks, sand, gravel and mud? A centrifugal pump is usually not considered for such purposes, but that is exactly what slurry pumps do in the mining and dredging industries.

Although water (or some other fluid) is always present with the solids in slurry pump operations, it is usually only a carrier. While it may be recycled, the power expended to move and pressurize it is lost energy. In some cases, the presence of water adds disadvantages to the process—such as in dredging operations focused on land building for ports and harbors, or in mining operations in which large amounts of rock remaining after the ore has been removed must be returned to the landscape in an environmentally responsible and geologically stable manner.

Reducing water use to the bare minimum can be important in these cases to ensure stability and to conserve scarce water resources. A large portion of the water that transports these solids remains in the ground and must be replaced—even a bucket of wet dirt is 35 percent water. 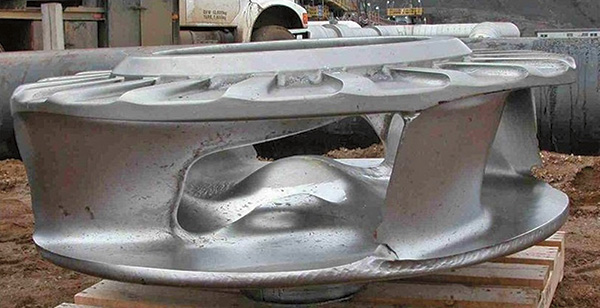 Pump wear and tear is another consideration. While transportation at high solids concentration is the most efficient strategy for conservation of electrical power and water resources, these dense slurry mixtures (sometimes more than 40 percent solids by volume) take a tremendous toll on the wetted parts of the slurry pump. An impeller or casing liner often becomes completely worn, losing as much as half its original weight within a few months. Considering that a typical slurry pump is moving between 500 to 5,000 cubic meters per hour (m3/hr) of high-density slurry, with some large operations in the range of 10,000 to 20,000 m3/hr (44,000 to 88,000 gallons per minute—gpm), the size and expense of replacement parts becomes a factor. In fact, it can approach 40 percent of the total cost of ownership, including power costs. Downtime must also be considered because a large mine can lose as much as $100,000 USD per hour in revenue when a critical slurry pump unexpectedly goes offline.

While a slurry pump hydraulic lab carries out conventional pump performance tests on clear water (useful as a design baseline), the slurry testing provides the most interesting results. Given the range of effects and considerations, the tests themselves vary widely. This article discusses two examples to help illustrate this. 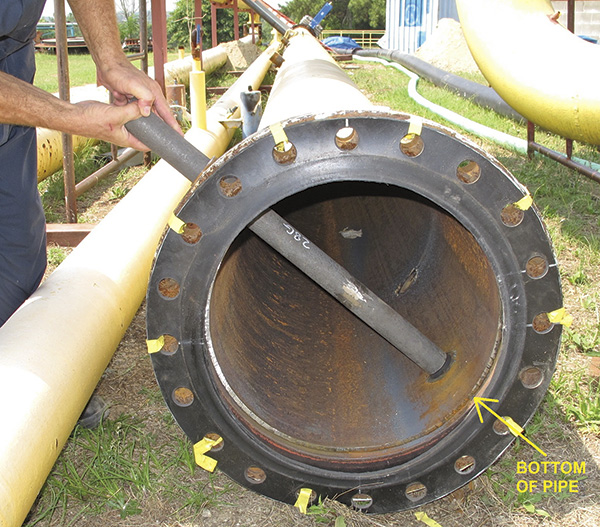 In some applications, such as dredging a new channel or in the “hydrotransport” of phosphate matrix and oil sands, the largest solids can exceed 100 millimeters (mm), or 4 inches, in diameter. At this size, impact wear at the impeller inlet and casing cutwater will often limit service life. While several tests exist for quantifying slurry wear resistance, they invariably use sand-sized particles, so little is known about the impact resistance of typical slurry pump materials under more extreme loads. Because many such materials are relatively hard and brittle, this issue cannot be overlooked. Key questions include:

To answer these questions, the hydraulic lab constructed a “wear test” rig consisting of a 28-inch (710 mm) suction pump operating in a 20-inch (508 mm) pipeline at velocities of up to 33 feet per second (ft/s), or 10 meters per second (m/s). The test solids consisted of granite “rip-rap,”passed through a screen to obtain a top size of 6 inches (150 mm) and average diameter of 3 inches (75 mm). The wear samples consisted of 2-inch (50 mm) bars placed vertically into the pipeline against the full impact force of the solids as they moved along the bottom of the pipe. Different materials were tested—including several grades of white iron, tungsten carbide and welded coatings. An alloy steel bar was also included as a control sample. Tests were performed at different velocities and in each case, fresh rock was added to the system every 15 minutes over the course of four hours, eventually reaching a concentration of approximately 6 percent by volume. Attrition of the solids was severe, with few particles remaining larger than 3 inches. 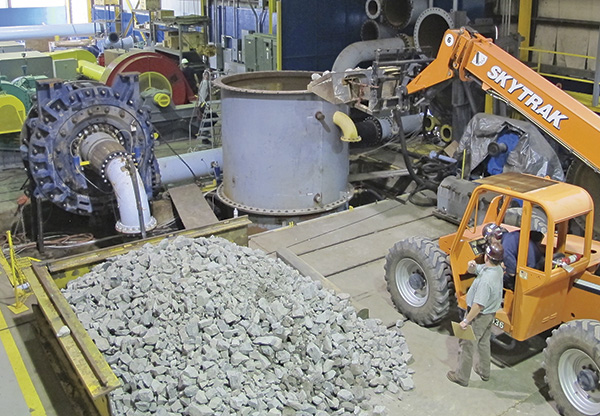 Before testing, there was some debate that material strength might be more important than hardness in these conditions. In fact, hardness proved most important in all but the most brittle forms of tungsten carbide, although the relative difference between materials fell to about half of that seen under normal wear tests.

As a part of this study, the interactions of the solids within the pump were also modelled using discrete particle computational fluid dynamics (DEM CFD) software, in which individual particles are tracked and their interactions with the pumping surfaces and with each other are determined. This has led to improvements in pump design for reduced impact wear effects.

In many mining applications, the ore contains small amounts of metal. For example, many copper mines contain less than 1 percent copper. The process of extracting the valuable metals requires extensive grinding and processing of the ore at the rate of thousands of tons per day.

Once the concentrated metal bearing minerals are removed for smelting, 97 percent of the solids may remain for reclamation into the environment. As mentioned above, these solids should be placed at the highest concentration possible to ensure a geologically stable landscape and conserve water resources. These are often finely ground, sized to 100 microns or less, and form a thick paste with non-Newtonian fluid properties. Often, transportation must extend several kilometers and friction losses in the pipeline can be high. 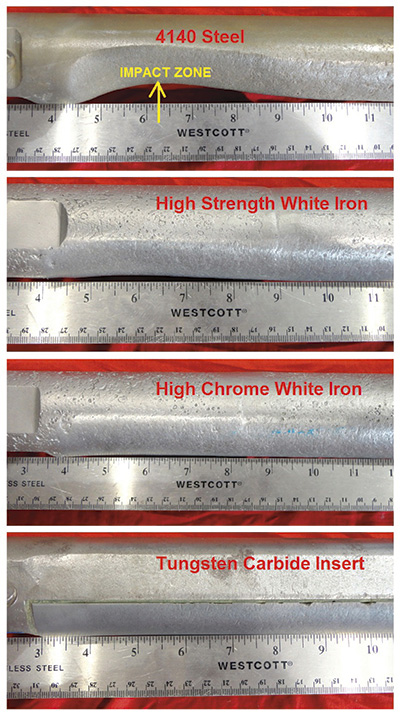 The paste from each mine is different and only testing in the lab can define its parameters precisely enough to ensure a successful system design and protect the large investment involved in construction of the pumping system and reclamation area. The slurry pump hydraulic lab regularly tests such slurries for mining engineers, but is also interested in determining the effects of these slurries on pump performance.

In some ways, these slurries act like viscous liquids, but also often have what is known as a “yield stress,” or a value of force that must be applied before the liquid will shear. This behavior is exhibited in everyday liquids like mayonnaise and peanut butter. In pumping applications, unusual flow patterns can result, such as plug flow in pipelines, in which a central core of liquid moves as though it was a solid cylinder. In the pump, the situation becomes more complex and in some cases, centrifugal pumps fail to move these liquids for unknown reasons. In recent testing, slurries were being pumped at yield stresses up to 1,200 Pa, resulting in pipeline friction losses up to 4 feet of head for every foot of pipe, an extreme case from a practical (economic) standpoint, but useful for the development of slurry pump performance models.

The next step in this program will be the modelling of the complex fluid dynamics within the pump using non-Newtonian CFD modelling to correlate the measured effects against underlying flow patterns and gain insight for the design of improved paste-handling pumps.

Hopefully, these examples help explain the challenges and rewards of slurry testing. Although often less than exact, usually somewhat messy and frequently without established guidelines, slurry testing places the engineer in direct contact with complex fluid dynamics problems of practical economic interest and offers the opportunity to take a hands-on area of scientific study from the empirical to the theoretical. 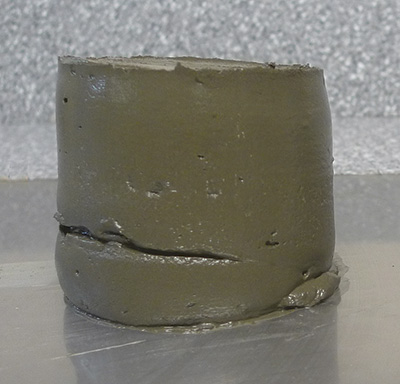 Robert Visintainer is the vice president of Engineering for GIW Industries Inc., including product design, materials development and the GIW Hydraulic Lab. He has worked in the design, testing, sales and manufacture of centrifugal pumps since 1981, in association with GIW and parent company KSB AG. Please visit www.ksb.com/giw-en for more information.