These components do not have to be sealed from harsh operating media.
by Rob Judd (U.S. Synthetic)
05/19/2015

Bearings are a vital component in the wastewater industry. Breakthroughs in bearing technologies help wastewater companies extend the life and operational efficiency of critical applications—even when those applications are operating in harsh conditions, with corrosive fluids and under heavy loads.

The main problem facing wastewater applications is not the operating fluid itself. It is the ongoing threat of seal failure that causes bearing contamination, ultimately leading to destructive and costly system failure. Many wastewater applications such as transfer pumps, electric submersible pumps (ESPs), stationary pumps, vertical turbine pumps, dredging pumps and injection pumps can operate in demanding and abrasive environments. Unfortunately, a typical sealed bearing must be kept clean and lubricated for the pump to function properly. Even the smallest break in the bearing seal can quickly flood the bearing with abrasive and corrosive working fluids, bringing pumping operations to a halt.

Recently, a coastal wastewater treatment facility in Washington demonstrated the effects of running in a corrosive saltwater environment. The biggest difficulty that the facility faced was the intrusion of saltwater into its sewage-outflow pipes."If higher water levels are able to push salty water into the county's wastewater-treatment system, corrosion will worsen. This has already been seen to a certain extent with equipment that should be lasting 50 years breaking down after 20" (Seattle Weekly, "King Tide Shows What Climate Change Has In Store," January 2015).

Corrosion is a killer when it comes to application integrity. Bearings and seals have a direct impact on wastewater equipment and system performance. They simply cannot fail. Because these applications generally run in corrosive conditions, wastewater engineers design bearings and seals that are protected from operating fluids. However, these bearings generally require a watchful eye and ongoing maintenance. When a seal fails, operational fluid leaks into the bearing housing quickly, decreasing equipment life, increasing surface friction and energy consumption, and affecting equipment operation.

Faced with these challenges, some companies in the wastewater industry are discovering the benefits of advanced seal-free bearing technology—using polycrystalline diamond (PCD). PCD is an advanced engineering material comprised of individual diamond crystals that have been fused together under extremely high pressures and temperatures. The result is a diamond bearing surface that provides extreme hardness, wear resistance and thermal conductivity—delivering a bearing that can be submerged directly into corrosive and abrasive process fluids. This eliminates the need for seals and lubricants altogether. Instead of designing around corrosive process fluids, diamond bearings can work directly in them.

"In our initial testing, we threw sand and gravel into the PCD bearing to see how it would perform. It seemed to like it— just ground up the particles with no problem. In some ways, it actually worked better," said Clayton Bear, president of New Energy Corporation, a builder of Marine Hydrokinetic power generation equipment that typically operates in silt-laden river water and canal water.

Another large energy company also saw remarkable results from its adoption of diamond bearing technology. The company reported significant improvements in its chemical mixing application. The application used a traditional foot bearing that was typically failing every three months. Replacing the bearing was time-consuming and difficult. Equipment had to be shut off, tanks had to be drained and cleaned, and maintenance personal had to climb down into the base of the tank to replace the bearing. Company engineers swapped the mixer's foot bearings with diamond radial bearings. After a six-month test, the diamond bearings showed no measurable wear. The chemical mixing application bearings have now run for four years without failure or maintenance. 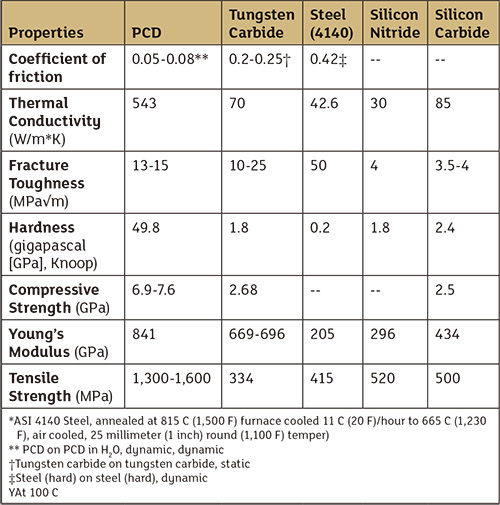 Compared to traditional bearing technology (such as tungsten carbide), diamond bearings offer extended bearing life by four to ten times in the harshest real-world environments. Although diamond bearings are relatively new in the wastewater industry and in pumping applications, this technology offers a reliable, cost-effective and proven solution to make pump operations more robust and maintenance free. 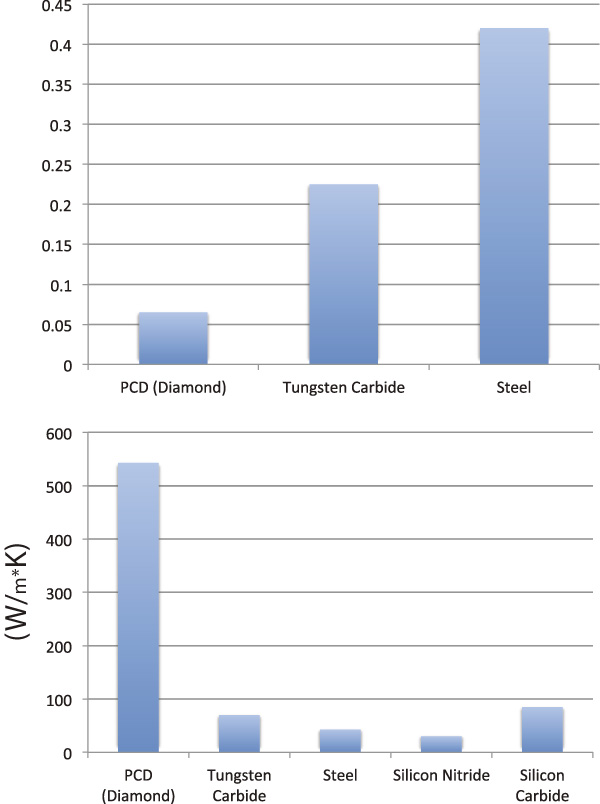 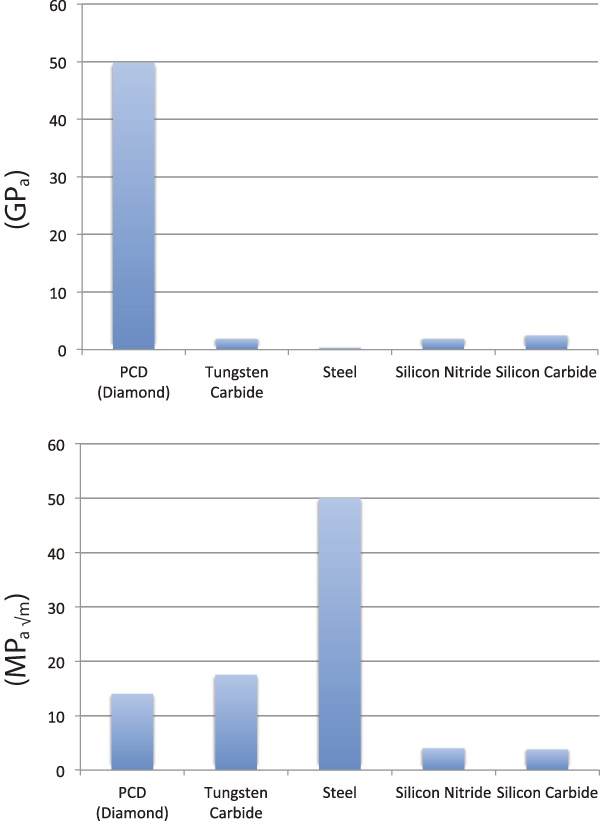 High thermal conductivity reduces the likelihood of causing localized welding of the surfaces during starting and stopping, which in turn leads to scoring and galling of the bearing surface. In sliding bearings, low coefficients of friction are desired to decrease heat generation and reduce power losses. A bearing material exhibiting a large fracture toughness will decrease the likelihood of race damage during extreme operation conditions. Because of its extreme hardness, high thermal conductivity, fracture toughness and strength, diamond is very resistant to wear and damage from abrasive particles in lubricants or process fluids.

Rob Judd, director of sales and engineering at US Synthetic Bearings, has 15 years of professional experience in engineering and new product development. Rob holds an undergraduate degree in mechanical engineering from Utah State University and an MBA from Xavier University.