These seals and their piping plans offer a simpler alternative to wet containment systems.
by Mark Savage
01/23/2015

Dry containment seals provide enhanced safety and control of emissions. When coupled with the appropriate piping plans, they can provide early detection of sealing performance deterioration and trigger an alarm if the seal fails.

The traditional method for enhancing reliability and safety while lowering the release of emissions into the atmosphere is to use a dual unpressurized wet seal combined with an American Petroleum Institute (API) Plan 52 reservoir, instrumentation and interconnecting piping. This system faces drawbacks including high initial cost, limited locations to mount the reservoir, a sensitivity to incorrect commissioning and operational practices that can cause rapid reduction in the sealing systems reliability and disposal of contaminated buffer liquid.

Dry containment sealing systems offer the same benefits of improved reliability and safety and lower emissions. However, they do not require the complexity and cost of the wet seal support systems to achieve these benefits.

A dry containment seal is similar to a traditional mechanical seal, except the design and materials of construction are selected to negate the need for liquid lubrication at the sealing faces. These seals are available in both metal bellows and O-ring pusher styles and feature plain-face or textured-face variants, such as spiral grooves or other hydrodynamic features.

Instrumentation connected to the containment seal cavity will detect process seal failure, enabling the pump to be safely shut down and isolated. Although containment seals have the capacity to operate at the full, pumped fluid pressures and conditions, they are not intended to do this for extended periods of time with a failed process seal. They provide sealing for a sufficient time to safely shut down the machine with minimal effects to the production process.

The normal leakage that occurs from any process mechanical seal will be in either liquid or vapor form. Additionally, for pumped fluids at elevated temperatures, vapor leakage may condense into a liquid once it reaches the cooler regions of the mechanical seal and the connected sealing support system. Two piping plans enable the monitoring, containment and disposal of leakage. Plan 75 is for condensing leakage, and Plan 76 is for non-condensing (vapor) leakage. Additionally, Plan 72 introduces a buffer gas for non-condensing vapor leakage and helps lower emissions.

Plan 75 is intended to be used when the pumped fluid sealed by the process seal will condense at lower temperatures or when it will always be in a liquid form. This sealing support system connects to the mechanical seal’s containment seal drain (CSD) connection located in the lowest part of the containment seal cavity between the process seal and close clearance bushing (see Figure 2). This location allows for the accumulation of any liquid leakage to drain away from the mechanical seal before it has the opportunity to interfere with the operation of the dry running containment seal. 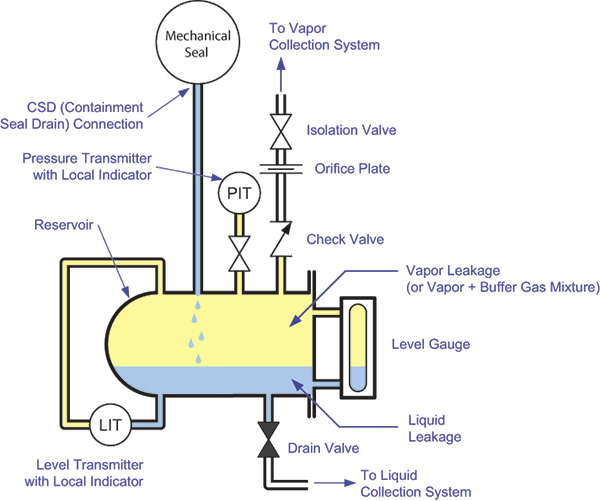 Liquid leakage flows under gravity from the containment seal cavity to a collection reservoir typically located below the shaft on the pump baseplate, adjacent to the mechanical seal or pump bearing housing. The accumulation of liquid leakage is indicated locally by a level gauge fitted to the reservoir and remotely through a level  transmitter. The transmitter is  also used to set alarm points to indicate when the reservoir is full. Any of the leakage remaining in vapor form is further routed through an orifice to a flare or vapor recovery system.

Normal operation will result in the filling of the collection reservoir over a relatively consistent period of time, requiring periodic draining. Any change to the rate of filling is typically the first indication of the deterioration of the  process seal’s performance. A process seal failure will result in the rapid filling of the collection reservoir with liquid that is escaping through the connection into the flare or vapor recovery system. The orifice plate creates back pressure that is used to trigger a high-pressure alarm.

Plan 76 is intended for use when the pumped fluid sealed by the process seal will not condense at lower temperatures or pressures. This sealing support system connects to the mechanical seal containment seal vent (CSV) connection in the upper part of the containment seal cavity between the process seal and close clearance bushing (see Figure 3). This location allows the vapor leakage to accumulate and be directed away from the mechanical seal with minimal impact to the operation of the dry running containment seal.

The leakage vapor is routed through an orifice to a flare or vapor recovery system. A pressure transmitter monitors the pressure in the containment seal cavity. In the event of a process seal failure, the orifice plate causes a back pressure that triggers a high-pressure alarm. The piping continuously slopes upward, and provisions are incorporated so that any condensate that forms can be captured and drained away.

Many facilities use a combination of the piping plans described above.

In addition, these piping plans can be used in combination with process flush piping plans, such as Plans 11, 13 and 21. 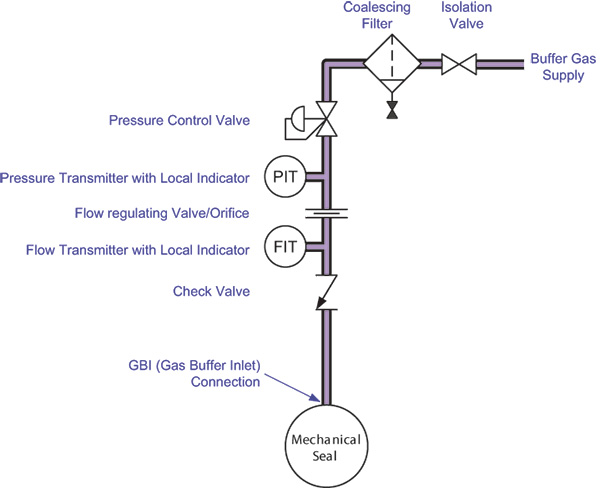 To ensure that alarms function correctly, the alarm guidelines should be set carefully to ensure that false alarms are not triggered. Similarly, alarm points must be sufficiently sensitive to activate in the event  of a failure.

When using a pressure control valve (Plan 72) in conjunction with Plan 75 or 76, the pressure should be regulated to a level above the flare or vapor recovery system  pressure but less than the Plan 75 or 76 alarm pressures and less than the pumped fluid pressure in the seal chamber. A low output pressure is desirable.

When Plan 72 is used in conjunction with Plan 75 or 76, the low-pressure alarm level should be set at a pressure above the flare or vapor recovery system pressure and below the pressure control valve outlet pressure.