Unexpected maintenance or repairs can represent a major expense to end users. The costs of parts, labor and production downtime compound to create serious problems for any facility. Many users find it helpful to implement proactive maintenance policies that allow them to plan for and minimize these expenses. Advanced predictive analytic solutions can enable users to monitor component performance and detect problems early, helping them design and carry out effective proactive maintenance.

In November, a software monitoring solution detected an increase in condenser backpressure at a combined-cycle power plant. The backpressure moved from 1.16 inches of mercury (inHg) (0.039 bar) to 2.27 inHg (0.076 bar) and continued to rise to as high as 3.15 inHg (0.107 bar) in early December. Once detected, the remote monitoring and diagnostic (RM&D) team sent an email notification to the end user, who investigated the issue the following day.

The end user learned that the high condenser backpressure was caused by an unhealthy condenser vacuum pump. The pump was swapped out, and the condition improved. 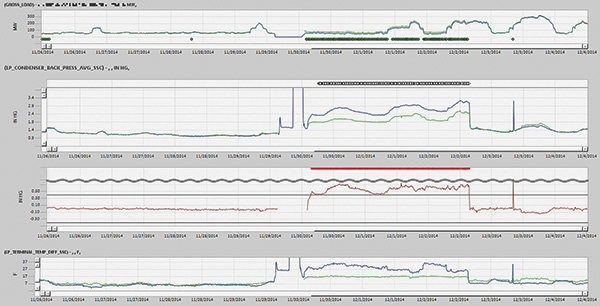 Early notification provided the end user with an opportunity to proactively swap the vacuum pump, preventing unnecessary performance losses on the condenser. The provider was able to help the user verify that its maintenance action was successful by showing that actual values returned to expected values.

In early September 2014, a software solution detected an increase in the motor outboard bearing temperature for a condensate booster pump (CBP). Temperatures rose as high as 170 F (77 C), while expected values were 150 F (66 C). Concurrently, the pump outboard bearing temperature for the sister CBP rose as high as 150 F (66 C). The RM&D team sent an email notification to the user and began tracking this issue on weekly calls. 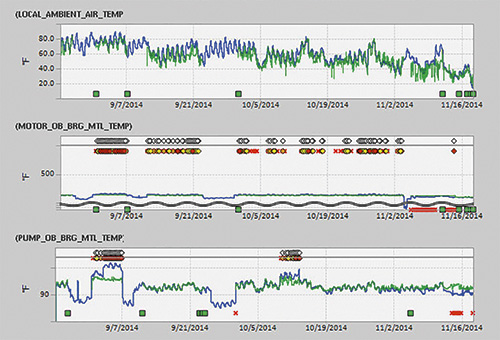 Figure 2. The motor outboard bearing temperature had higher values than expected for its operation.

If the bearing temperatures had continued to increase, the bearings could have been damaged, requiring premature replacement and resulting in subsequent loss of production. The RM&D team was able to collaborate with the customer to resolve the cooling issues. When the issue was finally solved, the provider helped the customer verify that their maintenance action was successful by showing that the actual values returned to expected values. 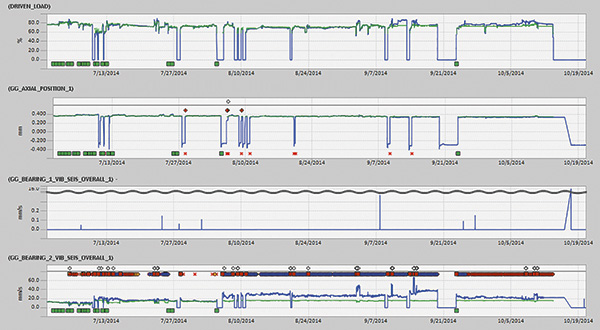 Brandon Perkins is the product marketing manager for Industrial Data Intelligence at GE Intelligent Platforms. He believes that data is the fuel of the 21st century and that the Industrial Internet will transform industries and economies by improving productivity, environmental stewardship and worker safety around the globe. He may be reached at Brandon.perkins@ge.com.