The Sabine River Authority of Louisiana created the Diversion Canal System in 1970. The goal was to decrease dependence on the sole area aquifer and supply fresh, untreated surface water from the Sabine River to industries in the Lake Charles and West Lake area, which includes petrochemical plants and an oil refinery. Because of their proximity to the Gulf of Mexico, the surrounding surface water is brackish and unsuitable for the process requirements of these plants.

The system consists of three pumping stations, five level control gates, nearly five miles of underground pipeline and more than 35 miles of channel canals. Pump Station 1 draws water from the Sabine River into the canal system. Pump Stations 3 and 4 pump the water into the pipeline for delivery. It is used as utility water, process water or steam generation by Air Liquide, Air Products, Citgo Phillips 66, Eagle US 2, Entergy, Equistar, LC Co-Gen, LA Pigment, Lyondell, Matheson Tri-Gas, Westlake and Sasol. According to a 2014 report by the Southwest Louisiana Entrepreneurial and Economic Development (SEED) Center, the system is under contract to deliver 141 million gallons per day (mgd) to these thirteen major users, with a total capacity of 216 mgd. 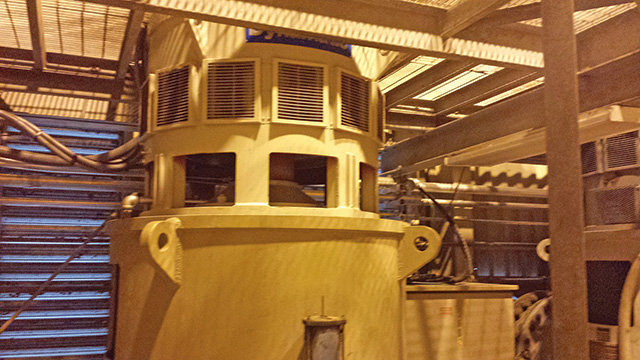 Image 1. An eddy current drive mounted on a vertical turbine pump at the Sabine River Authority (Images and graphics courtesy of DSI/Dynamatic)

Stations 3 and 4 were designed with two variable speed, single stage, vertical turbine pumps using eddy current drives, 250-horsepower motors, and analog controls. The pumps discharge into a 36-inch pipeline and maintain the pipeline pressure at about 12.5 pounds per square inch.

After 40 years of continuous operation, the Sabine River Authority looked into upgrading the system. The rotating mechanical equipment was still functioning well, but the controls needed modernizing. An engineering firm was brought on that was strongly in favor of replacing the entire system with variable frequency drives (VFDs), but Matt Istre, the electrician at the Diversion Canal, fought in favor of keeping eddy current drives. 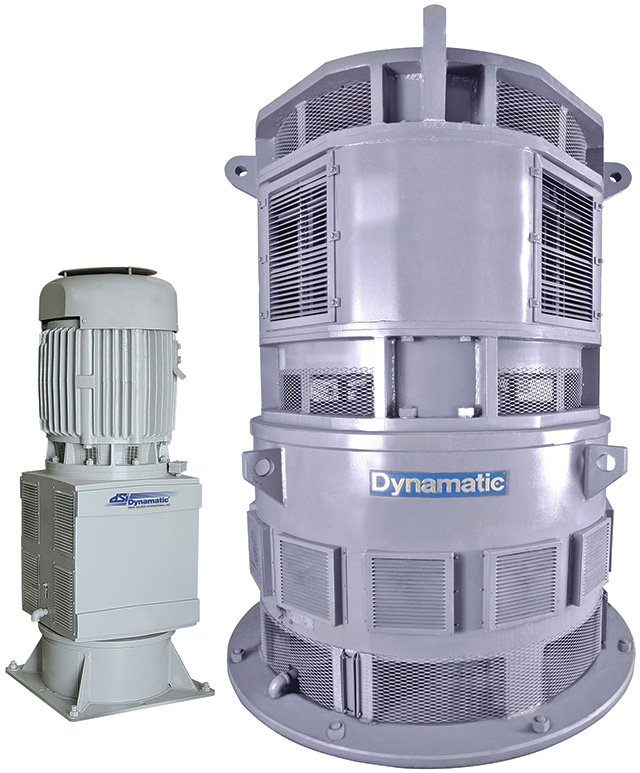 "Our past experience with eddy current has taught us they're more robust and handle power cycling better," Istre said. "From an everyday maintenance standpoint, I didn't want VFDs—they have to be in a climate-controlled environment, and all of our pumps are housed in a small metal building with no air conditioning. Eddy current drives don't need that. We purchased new eddy current drives and digital controls to ensure continued reliability for the next 40 years."

Eddy current drives and VFDs provide controlled, adjustable speed to alternating current (AC) motor-driven pumps. By adjusting the speed of the pumps to match the necessary capacity, the shaft load of the pump can be reduced, resulting in significant energy savings in the form of reduced electrical power input. With large industrial pumps, the savings can be well over $100,000 per year for each unit in operation. Variable speed operation also reduces wear on the pumps and reduces possible hydraulic fluctuations in the pipeline system.

What is An Eddy Current Drive?

VFDs operate by electronically altering the input power (frequency and voltage) to control the speed of the motor. Eddy current drives—also known generically as magnetic drives, eddy current clutches or magnetic clutches—are driven at a constant speed by an AC motor and use a simple electro-magnetic device to control torque and speed to the driven load. The power to the motor—and to the pump—is not manipulated electronically. Instead, it comes directly from the electrical bus. This prevents harmonic distortion and other power quality problems. The electrical system sees only a constant speed motor operating at a varying level of loading. 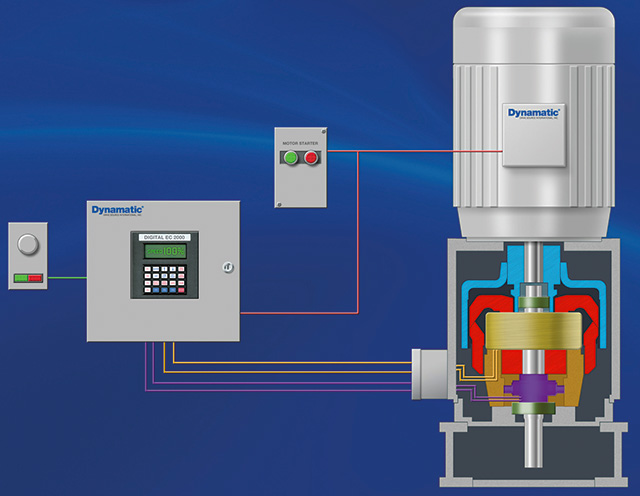 Figure 1. In a typical configuration, an induction motor is mounted on top of the eddy current drive

In a typical vertical configuration, an ordinary induction motor is mounted on top of the eddy current drive. The drive is built within a stationary frame of fabricated or cast steel with a lower flange and shaft similar to that of a vertical motor. Two concentric rotating members—the drum (sometimes called the ring) and the magnetic rotor (sometimes called the magnetic field)—are also in the frame. The drum is a cylinder of magnetically permeable steel coupled directly to the motor shaft. It rotates at constant speed determined by the speed of the motor. The motor shaft provides an axial and radial support bearing for the rotating drum.

The variable speed magnetic rotor is mounted concentrically within the drum. They are separated by bearings, which maintain an air gap between the inner diameter of the drum and the outer diameter of the magnet to a specified tolerance. The outer surface of the magnet consists of a series of magnetic poles with alternating north and south polarity that are magnetized at varying strength by a low-power direct current (DC), a phenomenon known as excitation. 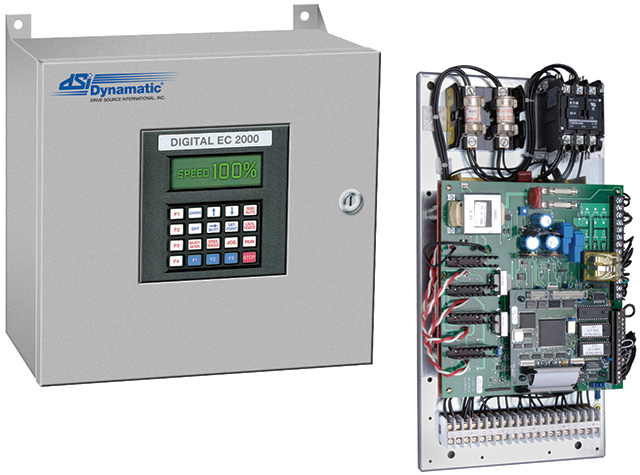 The excitation current flows to a coil that induces magnetic flux to the pole pieces, or in some designs, a series of individual windings on the individual pole pieces. Some models use carbon brushes and slip rings to deliver the current to the pole windings. As the rotating drum passes through the magnetic flux field in the air gap, a pattern of eddy currents is established in the drum's steel. In turn, these currents establish a magnetic field of their own, causing an exchange of torque from the drum to the magnetic rotor. It might be useful to envision that the magnetic rotor "chases" the drum.

The available torque is proportional to the excitation current flowing in the magnet's coils. Speed is controlled by increasing or decreasing this excitation current. A tachometer-generator or other speed-sensing device is provided for feedback to the controller and for external reporting to a visible meter or central control system.

The excitation current is derived from an exciter/controller, normally supplied as a package with the eddy current drive. It derives power from a low-voltage, single-phase source and uses a silicon-controlled rectifier (SCR) bridge to develop the DC used by the magnet coils.

In general, this excitation requires less than 1 percent of the power supplied to the driven pump load. The actual power that reaches the pump comes from the AC motor, not from this excitation.

The eddy current drive maintains a smooth consistent torque so long as the excitation current and at least some relative movement between the drum and the magnet occur. The differential between motor speed and output speed is called slip. In pumping applications, the drive unit should provide sufficient torque at 96 to 99 percent of motor speed, or 1 to 4 percent slip. This slip results in an equivalent percentage of loss, manifesting itself as heat in the drum dissipated into the cooling air. In centrifugal pump and fan applications, this slip loss, applied against a declining load as speed is reduced, results in a net loss comparable to VFD performance.

Each pump station has three bays, but only two are in use. The Sabine River Authority had the manufacturer refurbish the original 1970s eddy current drives and purchased new digital controls. They plan to install them in each pump station's third bay to use as a backup. "We'll be able to decrease wear on the drives by running two in parallel at half capacity." Asked if they would choose eddy current drives again, Istre's reply was, "Hands down."

Gary Patterson holds a B.S. in electrical engineering from Michigan Technological University, specializing in rotating machinery and electrical power. He has served as an application engineer, field sales engineer and regional sales manager for various manufacturers of variable speed drive equipment for more than 40 years. He is the national water/wastewater application specialist for DSI/Dynamatic.