Then, upon starting up a new motor, the observed acceleration start time will likely vary slightly from the initial estimate provided by the manufacturer due to the actual site load and power supply, so then the measured acceleration value will be used to replace the estimate in the system controls.

Often, operation engineers in oil and gas, chemical and other combustible sites (such as those that contain coal dust, fiber particulates, etc.) require that their manufacturers meet this criterion or otherwise satisfy similar standards. 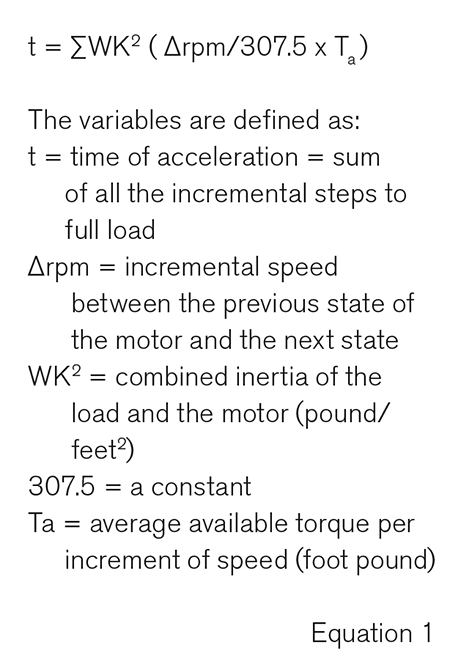 Engineers regularly inquire about the basis for the acceleration start time. This article will explain the details, outline why estimates vary from measured start time, and when an engineer might need to use the formula.

Generally, the segments chosen for the ∆rpm increments proportionally correspond to the torque curves for the system. At the lower end of the per-unit rpm range (up to 80%), 10% increments may be selected, but as the load increases, the increments should be narrowed.

The differences between the load curves become more variable at higher loads, so 5% or smaller increments capture this variability within the high rpm ranges. The specific intervals (10%, etc.) selected for the summation can vary as seen fit by the person calculating the acceleration time with smaller intervals improving accuracy but increasing the difficulty of calculation.

IMAGE 2: The manufacturer-provided speed-torque curves helps to generate the values in this table.

To help understand how the formula works, consider this example:

The manufacturer provides load speed-torque curves along with the motor that plots the expected load curve and the motor torque output in percentage of the full load torque of the motor as seen above. Using this curve generates a table as seen in Image 2. When the intervals of the acceleration times from the table are added up, the total acceleration time is shown in Equation 2. 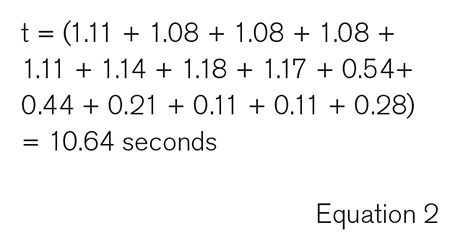 The formula requires an estimate of the average torque available for acceleration and is sensitive to changes in that average torque. Any error made in estimation results in a corresponding error in the acceleration time. The formula also requires the combined inertia of the motor (provided by the manufacturer) and the load estimate. A failure to include both underestimates the acceleration time, and an error in either leads to a proportional error in the start time calculation.

Lastly, the formula is sensitive to calculation errors. Although all formulas remain vulnerable to garbage-in-garbage-out scenarios, the sheer number of calculations required for a manual estimate offer plenty of chances for a single mistake to skew the results. It is always a good idea to work as a team so multiple sets of eyes can check the numbers.

Where Does the Formula Apply?

The acceleration time formula does not apply to motors with variable frequency drive (VFD) controls because the software, not the motor, determines the acceleration. The formula applies to all continuous load applications and motors such as pumps, fans, compressors, etc.

If a motor is rewound, the motor might experience subtle performance changes that might also affect the acceleration start time calculations; a new curve may be provided by the manufacturer performing the rewind.

Rerated motors may be offered with multiple power ratings to appeal to a variety of users and applications. However, once purchased for a specific application, the manufacturer can provide an estimate of the motor’s acceleration start time.

While users generally pick a specific application and do not consider other power ratings after installation, there have been situations where an emergency may require the rushed deployment of a motor for a new purpose. In a case of emergency such as this, users may pull out the specifications to calculate the new potential acceleration time with the new load, different voltage, etc.

If users understand the basis for the acceleration time calculation, then they can confidently use the curves provided by the manufacturer to make the required calculations.

This formula applies to all constant speed motors applications, so why does it need adjustment in the field? The calculations rely on estimates—estimates of the rpm, estimates of the load, etc. Even good estimates contain small variances that affect the actual acceleration times.

For example, a small variance in the supplied voltage may slow the start time by a similar degree. Also, while new medium-voltage motors are custom built for applications, rerated motors may possess higher capabilities than needed for the rated application and shift the load curves. However, while variances in the actual load, the actual voltage, and other variables may shift the observed acceleration start time, this formula provides a reasonable starting point.

The acceleration start time does not often need to be calculated, but it always helps to deepen understanding for that one day in the future when that knowledge comes in handy.