Apaving contractor working for the City of Bakersfield, California, and Caltrans, the state’s transportation department, is managing a construction project that involves widening Central California’s main traffic corridor, State Route 99, commonly known as Highway 99. This project represents one phase of a larger scope of work included within the Thomas Roads Improvement Program (TRIP).

The city’s website says TRIP projects “have been identified as necessary to relieve the stress on outdated infrastructure, caused by years of rapid growth in population, interregional travel, and freight movement.”

Cutting through the heart of Bakersfield in California’s San Joaquin Valley, SR-99 has more than 170,000 vehicle trips daily. The segment under construction is the most heavily used section of the 474-mile highway. To keep the jobsite free of water and the busy freeway unobstructed during construction, the contractor needed a temporary storm water lift station designed, delivered and installed. 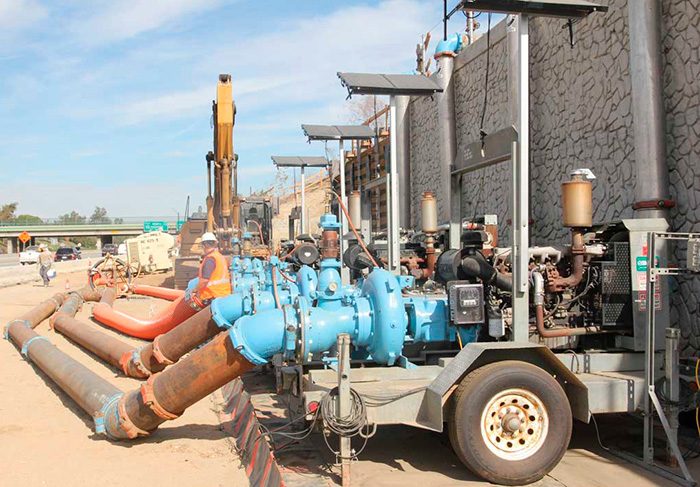 Image 1. Float-activated 12-inch pumps are set up in containment berms, ready to discharge storm water into a sewer line located up and over a 20-foot wall. (Image courtesy of Rain for Rent)

Freeway surfaces are typically higher than surrounding terrain and often are designed with low-lying areas to collect and reroute storm water from several miles of roadway. The collection points channel water into underground vaults, usually permanent structures that collect water until it reaches a specified level, at which point the lift station pumps activate and pump the water to a designated discharge point.

With this highway widening project, the construction of additional lanes made it necessary to take the existing permanent pump station offline because it will be rebuilt in a new location. This disruption required installation of a temporary lift station to protect the highway from closure in case of potential flooding.

Spatial constraints on the site and communication were critical safety factors in the temporary lift station’s design and implementation. The system’s footprint needed to be confined to an area the width of two lanes—a 24-foot wide space. Amid loud noise from nearby freeway traffic, coordinated movement and meticulous communication were required from the crew installing the temporary pump system and the main contractor that was operating a large crane for a separate yet adjacent part of the overall project.

Designed by the pump system provider’s engineering team, the initial plan received approval from the city’s engineers. The plan utilized four float-activated 12-inch pumps, each capable of moving 12,950 gallons per minute with a diesel-driven 200-horsepower engine.

Each 190-gallon fuel tank was assisted by a solar panel dock to keep the pump batteries charged as they stay constantly on, awaiting a float signal to activate pumping. Instrumentation, including the float switches and alarms, provided automation and additional security to the system to help ensure the pumps would automatically come online when water accumulated to a specific level in the five collection vaults, which were each 70 feet by 10 feet by 10 feet.

The pipework was designed with a network of 12-inch Victaulic pipe constructed to move the water from the five vaults and straight up a 20-foot-high wall. The elevated discharge point was within a 33-inch storm line reinforced concrete pipe. The storm line is 4 feet underground, so a distribution box was built up from it to efficiently and safely receive the discharge pipe.

To enable maneuvering within the restricted space, a scissor lift and all-terrain reach lift assisted the vertical installation of the discharge pipe without incident. Additional site safety was provided by using portable spill-containment systems and modular pipe support blocks for cribbing.

The temporary lift station system was installed and operational within two days. It routinely undergoes testing two to three times a month to ensure hoses are intact, suction is held and fuel tanks are full.

Anna Porter is a corporate communications specialist with Rain for Rent. She has worked in the infrastructure industry for 11 years and currently works in the Portland, Oregon, area.
Dave Haas is rental market manager for Clackamas, Oregon-based Cornell Pump Company. Haas has more than 30 years experience in municipal, construction, general dewatering and rental applications.