Ensure There Is Enough Torque To Start a Positive Displacement Pump

How can I ensure I have enough torque to start a positive displacement (PD) pump?

There are two main concerns regarding the torque required to start a PD pump. First, PD pumps have a constant torque load because they deliver an almost constant volume of fluid with each shaft revolution that is relatively independent of pressure. Therefore, the driver often needs to produce full torque immediately upon starting. Second, the design of the PD pump and the material that is being pumped may require a starting torque that is larger than the running torque of the system.

The National Electrical Manufacturers Association (NEMA) has assigned a simple letter designation to four of the most common three-phase alternating current (AC) induction motors. These vary in starting torque and speed regulation. They are all squirrel-cage construction and are available in many sizes.

Image 1 shows the motor torque as a function of percent speed for each NEMA design designation. 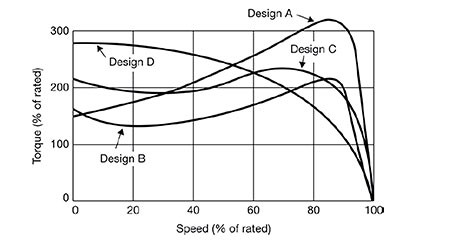 NEMA Design A
Design A has normal starting torque (typically 150 to 170 percent of rated) and relatively high starting current. Breakdown torque is the highest of all NEMA types. It can handle heavy overloads for a short duration. Slip is ≤ 5 percent. A typical application is powering of injection-molding machines.

NEMA Design B
Design B is currently the most common type of AC induction motor sold. It has normal starting torque, similar to Design A, but offers low starting current. Locked rotor torque is good enough to start many loads encountered in industrial applications. Slip is ≤ 5 percent. Typical applications include pumps, fans and machine tools.

NEMA Design D
Design D has high starting torque (highest of all the NEMA motor types). Starting current and full-load speed are low. High slip values (5 to 13 percent) make this motor suitable for applications with changing loads and attendant sharp changes in motor speed, such as in machinery with flywheel energy storage.