The Pump Video Academy videos (PVA-6 and 7) that accompanied these columns showed how the test was conducted and posed a challenge to readers to explain why the actual tested efficiency was so dramatically different from the theoretically expected as predicted by the Hydraulic Institute (HI) charts or efficiency estimator computer program.

Some readers suggested that since only the head-capacity curve was tested and constructed, it was impossible to know where the best efficiency point (BEP) is without also measuring power and calculating efficiency. In other words, the selected conditions on the curve (3.2 gallons per minute [gpm], 8.1 feet) might have been far from the BEP. So the calculations might not have presented the efficiency of the pump.

I read your interesting article, "How Efficient Is Your Pump?" which appeared in the February 2015 issue of
Pumps & Systems magazine. Toward the end of the article, it was suggested that the results of a test, shown in video PVA-7, were an example of an exception to the rule for achievable efficiency obtained from a chart or output from your program. A small end-suction centrifugal pump was tested. There was almost a 50 percentage point difference between the efficiency calculator prediction and the tested efficiency.

HI charts of achievable efficiency, as a function of specific speed and flow rate, are based on a pump performance at its BEP. As mentioned in the article, other factors such as surface finish may also affect efficiency values obtained from a chart or program. However, these factors might only improve or reduce expected efficiency values by a few percentage points at most.

The pump test shown in the PVA-7 video was conducted at a single operating point (3.2 gpm, 8.1 feet). This may be close to or far from the BEP. So, the actual efficiency at the pump's BEP may be quite different from the tested 4.5 percent value. An inspection of this pump's performance curve, as shown in the PVA-6 video that accompanied Pumping Prescriptions in the January 2015 issue of Pumps & Systems, reveals that this single test point is at the right end of the pump's performance curve. The tested point in the PVA-7 video is probably not at the BEP. 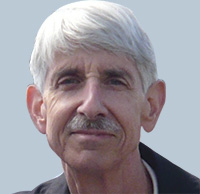 To answer Mr. Ruiz' question, we extended the original test to add power readings to the mix. By calculating efficiency at each tested point, we found the peak and compared it to the value predicted by HI (or by the efficiency estimator computer program), as Mr. Ruiz and others suggested.

A new video (PVA-11) presents this expanded test where a pump data acquisition system was used to measure flow, suction and discharge pressures, and power. Pump head and efficiency were then calculated from these measurements.

Reliability data such as vibrations and temperatures were also measured (see Figure 1). The pump data acquisition system consists of the input device with instrumentation, a live data transmission gateway via Internet or cell service, and software to process and display the data remotely. 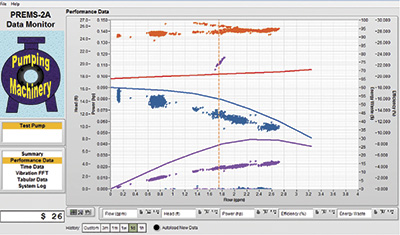 As a discharge valve is being throttled, live data is taken at each flow point, and the actual performance curves showing head, power and efficiency are constructed.

The density of several data readings at a given flow shows system fluctuations caused by the small size of the pump used for this example test.

The testing shows that the BEP is at about 2.5 gpm, where head is 11.6 feet, power is 0.135 horsepower and efficiency is 5 percent. The article originally used 3.2 gpm, before the BEP was established. Next, using an efficiency estimator program, we determined that the expected efficiency would be 46.6 percent (see Table 1). This is a nearly 40 percent discrepancy. 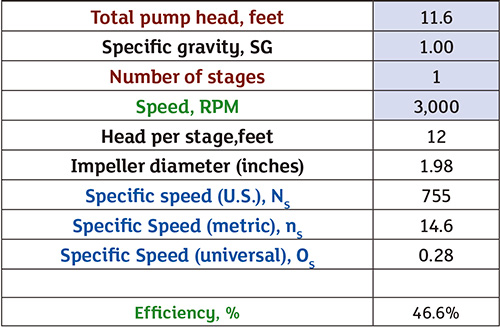 Note that the pump data acquisition system recorded actual operation over time and compared it to the original equipment manufacturer (OEM) expected curve. It shows that the actual power significantly exceeded the expected, the actual head was lower than expected and total efficiency significantly degraded compared with the OEM curve. We also see that during the course of time, the pump operated at four flows: near BEP (around 2.5 gpm), between 1.8 and 2.2 gpm, around 0.8 gpm and near shutoff. Based on density of test points, it appears that the pump operated for roughly the same amount of time at each of these flow rates.

This means that operating off-BEP is typical. Such operation would have two consequences: wasted energy (actual cost is noted by the program as shown in Figure 1) and reduced reliability (high radial loads off-BEP cause shaft deflection, leaky seals and failing bearings).

For a small pump used for demonstration, this may not be a significant issue. But for any mid-size or large pump, the consequences can be problematic.

We determined that a significant discrepancy between the theoretically expected and actually tested performance is not caused by evaluation at the point off of the BEP. Some other explanation must exist for the difference. Granted, the pump used for this test is small (a 2-inch impeller) and has low power, but the measured efficiency is still unreasonably low, even for such a small pump.

Dr. Nelik (aka "Dr. Pump") is president of Pumping Machinery, LLC, an Atlanta-based firm specializing in pump consulting, training, equipment troubleshooting and pump repairs. Dr. Nelik has 30 years of experience in pumps and pumping equipment. He may be reached at pump-magazine.com. For more information, visit www.pumpingmachinery.com/pump_school/pump_school.htm.

Pumps
Selecting the Right Grease for Pumping Systems
How to use the National Lubricating Grease Institute’s high-performance multiuse grease specification for pump maintenance.
Pumps
How High-Volume Water Pumps Can Save Cities From Rising Sea Levels
Cost-effective, high-volume water pumps can mitigate the effects of excess stormwater and groundwater if coastal cities act now.
Pumps
Wastewater Treatment: Design Consideration for Blowers
Blowers are mostly used in the secondary phase of treatment to create air bubbles which serve two main processes: aeration and agitation.
Pumps
Coupling Selection for Dredge Pumps
Answer these 4 questions when specifying a pumping system for a dredge.
Pumps
What is Cavitation?
Understand how cavitation can damage your system.