The efficient reduction and removal of solids is critical in food waste applications.
12/29/2012

Effective solids handling is paramount in achieving a free-flowing food waste disposal system. As in any process in which solids and debris are present in a liquid stream, food waste can be a particularly challenging medium for pumps and other process equipment to handle without properly conditioning the liquid. Properly conditioned liquids will be homogenous in consistency, and any floatable solids will be reduced to a size that is compatible with downstream pumps, process components and dewatering devices. Any hard foreign objects will have been captured and removed from the liquid stream before contacting downstream components.

It is often not realistic to properly condition the liquid in one step. Figure 1 shows a complete solids handling system composed of multiple grinders and a positive displacement rotary lobe pump to provide flow. In food waste handling, two major designs are commonly specified—the twin-shaft solids grinder and the inline macerator. Depending on the waste being processed, one design may be better suited than the other. In some cases, a combination may be the most effective choice. In the most challenging scenarios, solids can be reduced in steps through a series of grinders, ranging from coarse to fine. 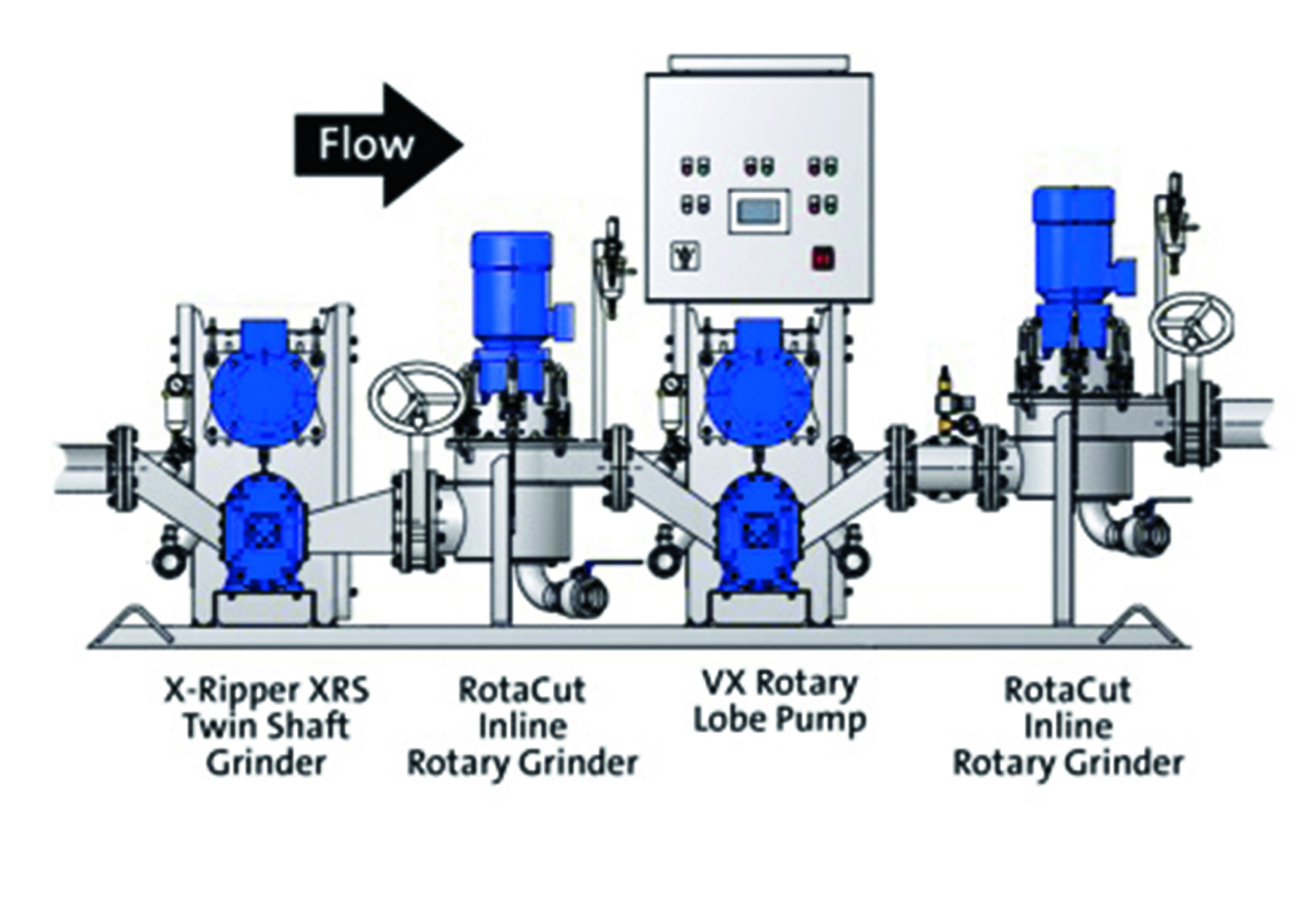 Figure 1. The anatomy of a complete solids handling system

Moving from left to right in Figure 1, the first component that the liquid encounters is a twin-shaft grinder. This device reduces large, solid objects to a size suitable for the inline macerator to reduce to a designated size. The twin-shaft grinder, in this case, would provide a coarse grind to reduce the solids somewhat closer to their intended final size.

After the twin-shaft grinder, the liquid is drawn into the inline macerator, a precision grinding device that delivers a cut solid to a specified size. Because of the intense rotation of the cutting elements, the liquid is also homogenized during grinding. Homogenizing the liquid improves the flow characteristics of the overall system and reduces the likelihood of a downstream clog or pulsation.

In addition to solids reduction, the inline macerator will provide solids separation. Separation would occur when a hard solid object is flowing in the liquid stream. Hard solids are typically non-organic objects—such as stones or metal fragments—that find their way into a waste stream. Although they get pushed along with the liquid, they will sink at the first opportunity. The inline macerator features a collection pot, in which hard solids are captured and removed from the liquid stream. In Figure 1, metal objects would be collected in the pot of the inline macerator and periodically flushed out through the port located at the bottom of the pot. Removing hard objects prevents damage to downstream pumps and processing devices and is ideal for overall system efficiency. 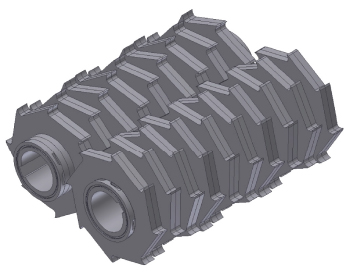 As the name suggests, two cutting elements are fitted on the opposing shafts of the twin-shaft grinder (see Figure 2). The teeth of each cutting element are intermeshed so that any solid entering the device will be forced through the cutters. The size of the solid is determined by the gap between the tip of the cutter and the opposing shaft. When choosing a twin-shaft grinder, selecting a model that uses a cutting element machined out of a single piece of steel is recommended. The alternative involves stacking individual cutting elements along the shaft. Although both designs function in the same way, the stacked version requires factory service for repairs and maintenance.

A positive quality of twin-shaft grinders is that they grind everything in the liquid stream. Everything that goes in comes out much smaller. In food waste applications, which can contain large, hard objects—such as bones, hooves or wood fragments—the twin-shaft grinder is a good choice as long as the downstream equipment can pass the remaining solids. 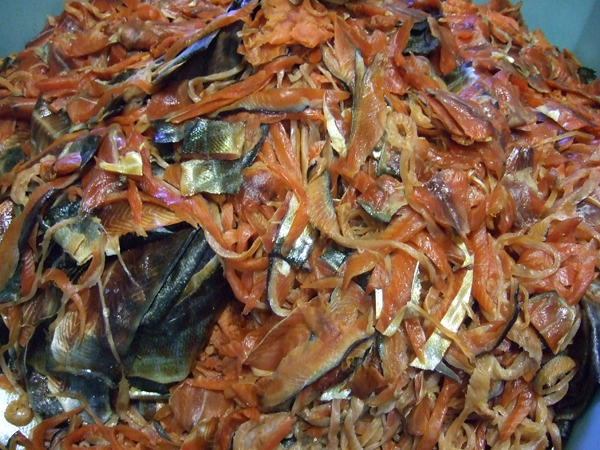 Twin-shaft grinders can also be configured to work as a dry-matter grinder. In food waste, it can be used to reduce waste into a form in which it can be disposed of more efficiently. The capacity of the dry grinder configuration is often on a much larger scale when compared to the piped-in version. For example, these grinders can accept an entire pig carcass or several hundred pounds of waste vegetables—such as onions, sugar beets or potatoes.

The results of the twin-shaft grinder’s effect on food waste are instant. These grinders can handle most any flow rate and typically are only limited by pipe size and pump capacity. The examples below demonstrate waste product after grinding. Image 1 shows waste fish reduced for disposal. Image 2 shows waste potatoes that have been reduced. 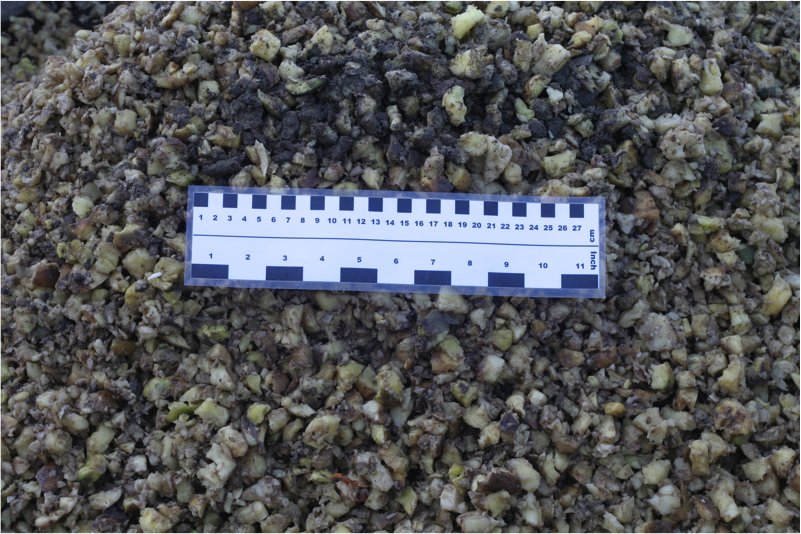 Image 2. Waste potatoes that have been reduced

An inline macerator is a precision cutting device that operates much differently than a twin-shaft grinder. A set of four blades rotate like an airplane propeller across a patterned screen. When the unit is fitted into the liquid stream, it creates a barrier that no solid can pass through without being cut. The cut size is determined by the screen pattern and the rotational speed of the blades. 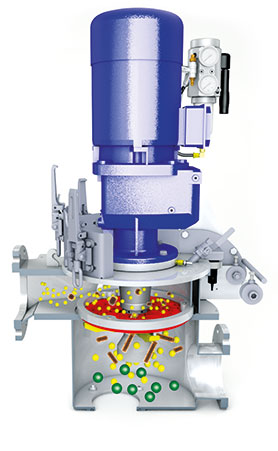 Figure 3 is a common macerator configuration and how it operates. This version is an upright design popular for food waste applications. The fluid is drawn from right up through the cutting head and out to the left.

Several aspects of the inline macerator design protect downstream pumps and equipment. In Figure 3, the dark green spheres represent hard, solid foreign objects in the liquid. Adding an inline macerator to a system captures any hard objects and removes them from the liquid stream before they get a chance to damage downstream equipment. The pot where the objects are captured is cleaned out periodically via the port at the bottom of the pot. Inline macerators are the ideal choice when a specific-sized processed solid is required.

Maintenance is a concern when deciding which style of macerator to install. Despite the fact that the operating concept involves metal-on-metal contact, the inline macerator is a low-maintenance device. The cutting head uses only a few components and is easy to access without removing the unit from service. The blades are the primary wear part, with the screen being second. Replacing the blades is as simple as removing the roll pins and installing the new blades. The screen can be flipped over to use both sides as a cutting surface, doubling the life of the part.

Cutting performance is maintained by the tension between the blades and screen. Tensioning varies by manufacturer. Better-performing products use hydraulics to maintain accurate pressure to ensure the correct solid reduction result.

Marino Curati is the director of marketing for North America at Vogelsang. He can be reached at marinoc@vogelsangusa.com. Vogelsang designs and manufactures rotary lobe pumps, inline macerators and twin-shaft grinders for wastewater, food processing and industrial applications. Vogelsang also produces a line of biogas process products for sludge lysing, conferment pre-mixing and digester feeding.