End users must understand the conditions that lead to early bearing failure to choose the best technology for their needs.
by Ed Kaineg
08/02/2016

All pump system operators and maintenance personnel must be aware of any side effects that can result from ongoing efforts to improve the energy performance of pump systems. Negative effects can be associated with modern variable frequency drive (VFD) systems, particularly with regard to the motor’s bearing supports. To be clear, this is not about discouraging the continued proliferation of these highly effective methods; rather, it is important to understand the conditions that lead to early bearing failure.

Many pump operators have achieved significant energy savings by varying the pump speed to match the demands of the attendant system. Although there are many ways to achieve this objective, the most common is the use of electrical control or VFD systems.

Image 1. Repeated electrical arcing can lead to a condition on the races known as fluting. (Image and graphics courtesy of Schaeffler Group USA)

A typical VFD system consists of an alternating-current (AC) motor, a controller and an operator interface. VFD controllers are solid-state, electronic power-conversion devices. Most VFD inverter circuits use an insulated gate bipolar transistor (IGBT) to perform the high-speed switching required to control speed.

The high-frequency switching of the IGBT will create parasitic capacitances in the pump motor’s major components, including the rotor and stator. Because the bearing acts as the bridge between these components, it can be exposed to these differences in electrical potential. In many cases, the bearing mitigates this situation because of design features that offer inherent resistance to current.

In some cases, however, the electrical potential across the bearing arcs through the contacting points, resulting in a phenomenon typically known as electrical erosion. This effect can cause the bearing surfaces to deteriorate.

First, a quick primer on basic bearing design, which will focus on ball bearings because they represent the most common type of bearing used in motor applications: Under load, the points of contact between the balls and races will create a pressure ellipse because of the elastic nature of the materials selected. The exact shape of the ellipse depends on several factors, including the following: 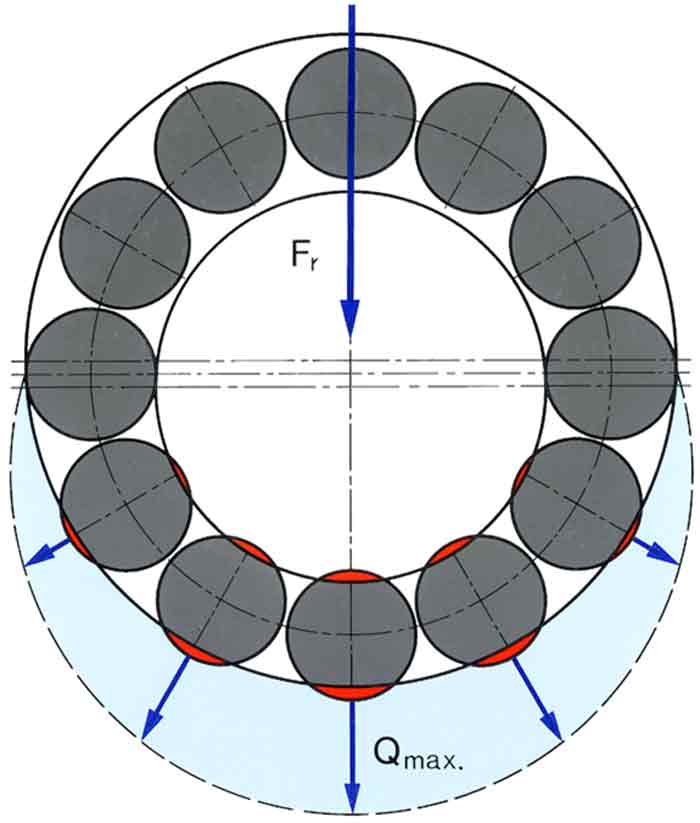 Figure 1. A typical loading situation on a ball bearing used in an electric motor application

Figure 1 shows a typical loading situation on a ball bearing used in an electric motor application. The red areas represent the balls that are loaded during operation.

During normal operation, a properly lubricated bearing will generate an elastohydrodynamic lubrication (EHL) film between the rolling elements and the races. This film prevents surface-to-surface contact and surface damage (see Figure 2). In electric motor applications, the film can also act as an insulating barrier against mild voltage potential across the bearing. In addition to the normal factors influencing the level of protection afforded by the EHL film, there are other considerations including lubrication degradation and contamination.

Figure 2. A properly lubricated bearing will generate an elastohydrodynamic lubrication film between the rolling elements and the races.

When a VFD system is introduced, the bearing voltage potential typically increases and can exceed the EHL film’s insulating value. The resulting damage can vary widely. If the voltage is low enough, the bearing can survive and the condition can go unnoticed.

Under certain conditions, serious damage caused by instantaneous electrical arcing (EA) between the rolling element and the race can occur. A single EA event can create small craters as the charge rapidly passes through the lubrication film and actually melts the material at the point of contact.

Once a crater has developed, it can disrupt the EHL film for subsequent rolling elements as they pass over the damaged area. This has the potential to create even more craters. Other resulting debris will cause the lubricant to degrade and produce a stress riser, which is formed by the debris that has found its way between the roller and the race.

Repeated EA can lead to a condition on the races known as fluting, which looks similar to the washboard appearance found on rural roads. Because of the more random motion of the rolling elements, the balls taken from a bearing exhibiting EA will be frosty in appearance.

According to some estimates, 10 to 20 percent of VFD installations will develop premature bearing failure. Evidence suggests that the probability of failure increases over time. As contamination levels rise or the lubricant’s basic lubricating characteristics degenerate, the odds grow in favor of damage.

With a relatively large amount of variability related to possible bearing damage, many end users may choose to take relatively inexpensive steps to reduce their exposure and improve machine uptime. Choosing between the most economical and the most effective bearing protection usually depends on the timing of this decision. An existing pump installation may call for a different solution than what a new or reworked motor installation may require. To understand the best solution, consider the following options.

Insulating coatings—usually aluminum-oxide-based—can be applied to either the bearing’s bore, its outside diameter (OD) or both of these surfaces. The most common coating surface is the outer race’s OD because the outer ring tends to have a loose fit in the housing, which minimizes the potential for damage during installation.

Coating thickness and insulating value will vary by bearing manufacturer, so when specifying bearings with insulated coatings, it is important to investigate these differences.

Coating thickness, which typically ranges from 100 to 200 micrometers (μm), is a good indicator of the protection level. Perhaps a better indicator of insulating value is the disrupted voltage that the coating is capable of providing. Because a coating’s effectiveness depends on time and moisture, higher disruptive voltage values should be considered.

Initially limited by the high cost of ceramics to only a few highly engineered applications, hybrid bearings are now more readily available because of more economical ceramic balls. The higher modulus and lower density of the ceramic materials used in hybrid bearings give them additional advantages: The material’s stiffness reduces rolling friction while its light weight reduces the balls’ angular momentum losses. This configuration reduces energy consumption in the bearing by up to 20 percent.

Another common method of protection is to provide a low-resistance grounding path for the rotor. This eliminates any electrical potential and, consequently, any potential for arcing. The basic requirement is that a rotating connection makes contact with the rotating rotor, conducting any electrical charge into a properly grounded motor base. This rotating connection can take various forms, including shaft grounding rings, spring-loaded brushes, annular brushes or rotating couplings.

A particularly promising method of protection under development involves establishing an electrical path through the bearing itself. This is accomplished by using a conductive material in the same general region as the seal. Unlike the non-conductive seal, this solution would allow current to pass without damaging the bearing’s rolling surfaces. A cutaway of this concept is shown in Figure 3. 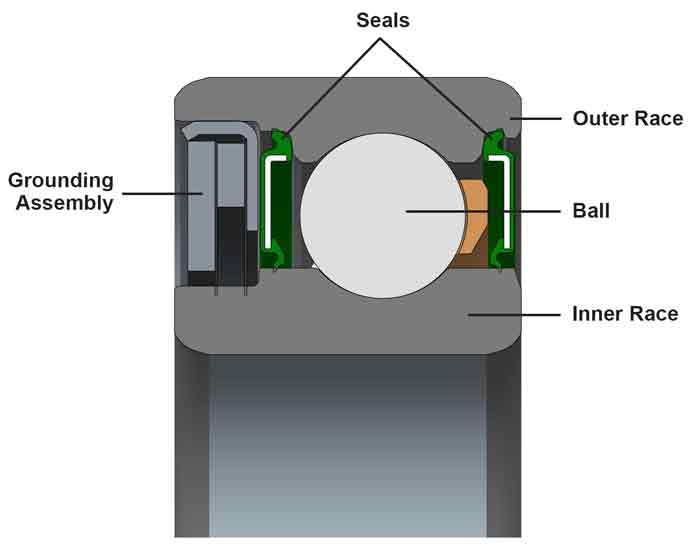 While VFD systems are an effective tool for improving pump system efficiencies, they create conditions in the controlled motor that can cause electrical arcing inside the bearing. This can lead to premature equipment failure.

There are several methods to protect the bearing from damage, and the best solution depends on the individual installation. As a general rule, considering the inherent energy savings offered by hybrid materials, a hybrid bearing can provide the lowest-cost solution for new or rebuilt applications.

For existing installations, on the other hand, grounding devices offer a compelling cost-effective method of protection. Considering the high cost of unscheduled motor bearing failure, providing some form of protection is always a sound investment.

Ed Kaineg is the pumps and motors industry manager for Schaeffler in the Americas. With more than 33 years of experience in the bearing industry, his career includes positions in engineering, product management and manufacturing technology. He holds a bachelor’s degree in mechanical engineering from Southern Illinois University.