How a Canadian Copper Mine Increased Efficiency with Progressing Cavity Pumps

Teck Resources, Ltd., operates the Teck Highland Valley Copper (THVC) mine located near Logan Lake, British Columbia, Canada. To facilitate efficient mine production, the senior foreman of Mine Services faced the challenge of continuously dewatering the surface of the largest open-pit mine in North America. The traditional approach to dewatering requires a series of centrifugal pumps to lift the collected water to the top of the mine for processing.

One of the original THVC dewatering systems consisted of five multistage centrifugal pumps (four pumps at 60 horsepower and one pump at 25 horsepower), operating an average of 20 hours per day (1,364 kilowatt hours per day) to remove the water from the open-pit copper mine. The surface water contains abrasive solids that accelerated wear on the centrifugal pumps, requiring THVC to rebuild the pumps as often as once per month and to replace the pumps, often twice each year.

Every year, THVC spent approximately $160,000 to maintain the system and consumed approximately 1,550,000 kilowatt hours of electricity to power it. The senior foreman at THVC believed a more reliable solution to this challenge was possible.

To improve the efficiency of the dewatering effort at THVC, the senior foreman selected a pump package powered by one progressing cavity (PC) pump to replace the five-pump centrifugal system. In the first year of operation, the new dewatering system only required scheduled inspections and periodic lubrication of the bearings. No parts required replacement, which resulted in a $160,000 reduction in maintenance costs. An additional benefit was that the PC-pump system only required 358,000 kilowatt hours, which was a 77-percent reduction in power compared to the centrifugal pumps, approximately $88,000 in savings. 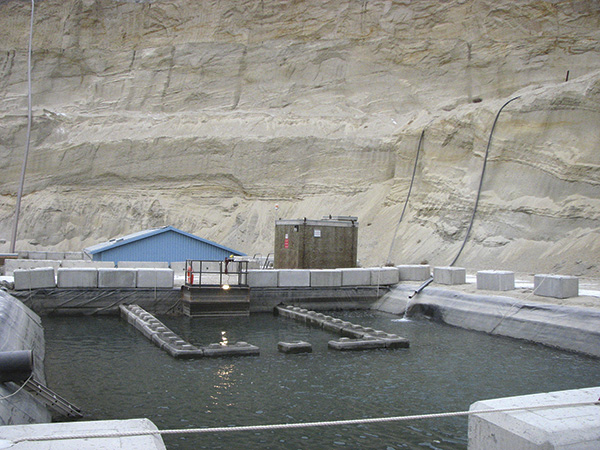 Teck is Canada’s largest diversified mining, mineral processing and metallurgical company. Headquartered in Vancouver, Canada, it produces copper, steelmaking coal and zinc, molybdenum, and specialty metals, with interests in several oil sands development assets. Teck owns or has interests in 13 mines in Canada, the U.S., Chile and Peru and one metallurgical complex in Canada.

Traditional mine dewatering methods, especially in North America, involve the use of vertical turbine and/or submersible pumps with additional centrifugal pumps added for boosting capabilities. While these methods accomplish the task, inherent added costs are associated when sand, silt and rocks are factors. These solids wear tight clearances and damage the impellers and casings of high-speed pumps, reducing the pumps’ efficiency and pressure capabilities.

Vertical turbine pumps (VTP) are designed to efficiently move large amounts of clean water at very high discharge heads. Extremely close clearances throughout VTPs are necessary to efficiently produce these high pressures. When solids/abrasives, which are typical of dewatering applications, enter these pumps, the internal clearances quickly become worn and the efficiency and performance of VTPs rapidly degrade.

The open-pit, THVC mine used the standard centrifugal pump dewatering method. THVC operators were challenged with a surface water buildup of approximately 360,000 gallons each day on a particular bench, approximately 600 feet below the top of its pit. THVC needed to pump 600 gallons per minute from this bench to the top of the pit for reprocessing. The original dewatering system was designed around VTPs and submersible pumps, staged at progressive levels in the mine to relay the surface water to the top of the pit. This complex system required a combined total of 265 horsepower, operating an average of 20 hours per day.

The senior foreman at THVC determined that after the VTPs and the submersible pumps had operated for six weeks, their flow reduced from 600 gallons per minute to 300 gallons per minute. THVC would remove these pumps from service, rebuild and re-install them, returning each pump to design conditions. THVC would rebuild each pump twice, and then it would replace the pump because of excessive casing and bowl wear. The maintenance budget for the upkeep of this single, five-pump system was approximately $160,000 to supply parts and new pumps. The labor was an additional expense for this system’s maintenance.

The THVC team approached this application with professional scrutiny to ensure confidence in using one pump to transfer so much water at high discharge pressure. Surprisingly, many engineers and the mine foreman in North America were unfamiliar with the reliability and cost benefits of PC pumps. Mining operations in the U.K., Europe, Australia, Asia and Africa have used PC pumps for decades in dewatering applications. PC pumps are ideal for dewatering because of their high reliability and life because they operate at a slow speed, reducing wear caused by abrasive particles, and their ability to handle solids in the fluid.

This application of PC pumps at THVC demonstrated the difference in reliability between the 3,600-rpm centrifugal pumps and the 450-rpm PC pump. PC pumps are positive displacement, so they continuously generate discharge pressure at different flow rates, regardless of pump speed. 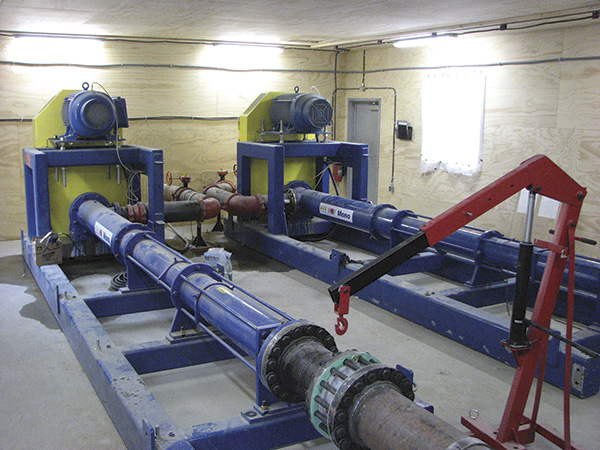 To improve the efficiency of the dewatering effort at the THVC mine, one progressing cavity pump was chosen to replace the five-pump centrifugal system, resulting in a $160,000 reduction in maintenance costs.

Once commissioned, the dewatering system exceeded expectations. Rather than the monthly maintenance and replacement performed on the original centrifugal pump system, the PC pump continued to operate reliably and cost effectively. The pump continues to run successfully after more than 18 months of continuous service.

Jim Putnam is the director of Strategy & New Product Development for NOV Mono. He holds a Bachelor of Science in business administration/management and a Six Sigma Black Belt certification from Motorola. He has more than 25 years of experience in consulting and global rotating equipment manufacturing, managing operations, engineering, sales, marketing, IT and product design and development. In addition, Putnam has experience in remote monitoring and diagnostics software development for large capital asset equipment. He may be reached at 281-854-0300.