How Carbon Works in Mechanical Sealing

Mechanical face seals are a complex combination of materials and design that form a system whose prime objective is maintaining the integrity of the pumping system, keeping what is inside where it belongs and preventing contamination from the outside.

From the simplest design to the most complex, the system must operate across a multitude of conditions (and often beyond what the original design intended) in terms of speed, contact loads and environment. Every component in the system is a vital link contributing to the system’s success or failure.

These systems enable relative motion between stationary and rotating components while simultaneously accommodating some level of axial or radial movement. The technology that has been developed and implemented in these systems has become so reliable that mechanical seals are often taken for granted. The vast majority of failures of mechanical seals can be attributed to the system in which the seal is installed, not the seal itself.

One of the materials used in many mechanical seal systems is based on the fourth most common element and the basis of all life—carbon. This article will explore how this common element plays such a critical role in these complex systems.

Because mechanical sealing systems must maintain tightly controlled contact between one rotating and one stationary face, interface stability must be maintained across a potentially wide spectrum of conditions. Face flatness is critical and is measured in millionths of an inch; unexpected distortion will change the interface dynamics significantly. With the proximity of the two face materials, contact is inevitable and the materials must be able to operate with some level of self-lubricity so they do not damage each other, which would create a path across that interface that enables system leakage.

Figure 1. Five of the eight carbon allotropes. (Graphics courtesy of the author)

There are eight allotropes of the carbon element (see Figure 1), based on how the carbon molecules align in the lattice, that result in a range of properties from the softest version, graphite (often used in pencil “lead”) through amorphous carbon to diamond, the hardest material known to man.

Included in this listing are Buckyballs and Buckytubes, which are more exotic (and expensive) forms whose value has yet to be realized. Diamond is a high-end option and is typically applied to the hardface for use in the most demanding applications where the associated premium for this option can be tolerated.

The primary allotropes used in mechanical seal materials are graphite (both synthetic and natural) and amorphous.

Mechanical carbon used in seals can be classified in three categories

There is then machining and final impregnation before lapping and packaging. Figure 2 depicts the many steps required. 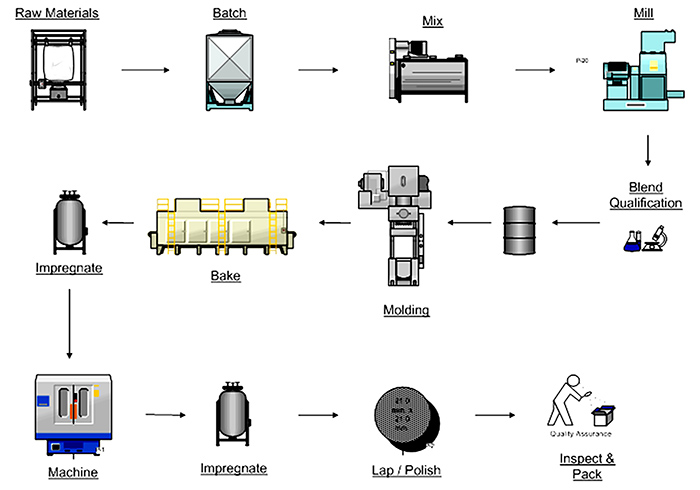 Unlike metals such as 316 stainless steel, there is no standard offering from manufacturers.

Each company creates a unique recipe intended to address specific conditions that maintain the interface stability; from low temperatures (cryogenic), to water, to methane, to oil, to higher temperatures and beyond, materials exist to provide the needed capability. These materials are designed for specific conditions. One recipe cannot perform in every condition, and seal companies work with material manufacturers to provide the optimum candidate for the application.

The ratio of carbon to graphite in the formulation will have a significant impact on the performance characteristics of the material.

Figure 3 shows the variation in physical properties, thermal conductivity and chemical resistance of the part according to the relative amount of carbon and graphite in the finished product. 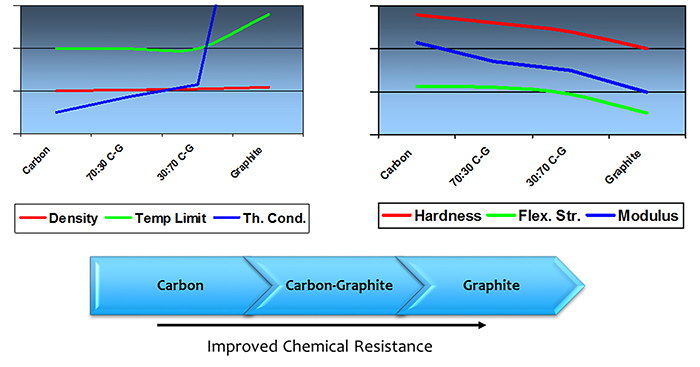 Figure 3. Effect of composition on physical, thermal and chemical properties

The attributes of the allotropes, or the various forms of carbon, can be combined in specific ratios and leveraged to achieve desired responses in a system where there is relative motion between two components in terms of friction and wear, (a.k.a. tribology), along with a large temperature range and the need for corrosion resistance. Carbon is an ideal seal face material for the range of conditions within a mechanical sealing system, and is widely used.

In the same way a pencil transfers graphite to a piece of paper, mechanical carbon can transfer material to the mating face—the level of that transfer is where the technology comes into play.

Manufacturers of carbon-based materials for mechanical seal faces achieve specific tribology through formulation of different elemental forms of the carbon atom and the use of other proprietary elements. Processing these recipes results in a structure that is literally held together by atomic carbon bonds.

A mechanical seal’s mating pair is the heart of the system and the two components are designed to work together. There exist optimum pairs for specific conditions.

The components of the recipe enable the proper tribology—too much or too little film transfer would result in shortened life or performance of the mechanical seal.

The structures can be enhanced through the introduction of various resins (which provide strength and impermeability) or metals (antimony, copper, or silver, which can improve strength and stability). See Table 1 for applications of various impregnation materials.

The role of the mechanical carbon differs with this high-end mechanical seal and the resulting recipe is unique for these types of seals.

Carbon is also a critical component in some of the hard face materials used in mechanical seals because it combines with metals at high temperatures to form metallic carbides. These materials include tungsten carbide and silicon carbide.

These carbides provide superior hardness and stiffness. They are not self-lubricating and therefore cannot run “dry,” but they run well against mechanical carbons.

Some material manufacturers have even developed methods to create hybrid structures, specifically for silicon carbide, that contain free graphite.

These materials, while not self-lubricating in the classic sense, offer enhanced capability for some of the most demanding applications by creating a stable and hard material that can run in marginally lubricated conditions.

Joseph Boylan received his B.S. in electrical engineering at Pennsylvania State University. He is currently responsible for the commercial portion of Morgan AM&T’s mechanical business, along with design, development, testing and marketing of carbon-graphite and silicon carbide materials for use in tribological applications. He has an extensive background in the field of self-lubricating materials for use in rotating equipment.