Over my years in the pumps industry and among the topics I have covered for Pumps & Systems, the subjects of pumps efficiency and energy consumption have generated a lot of comments, questions and feedback. Recently, a reader asked me a question on this subject, referencing an article that published several years ago. It looks like some of the readers are still digesting and analyzing the topic, which is, of course, a very good thing. Below is our interaction about this piece.

I have a question. If you have time to make a comment or two, that would be very appreciated. In your September 2016 article “What Happens to Power and Efficiency when a Pump Wears Out,” which I really enjoyed, you mention that “the data on power can tell the difference between the types of internal wear—for example, if the wear ring clearances have worn out or if the impeller itself is deteriorating (as might be the case with highly abrasive pumpage or corrosive chemicals).” I have thought about this and believe that wear that affects the impeller only (and not wear ring clearances or other leak paths) would result in: 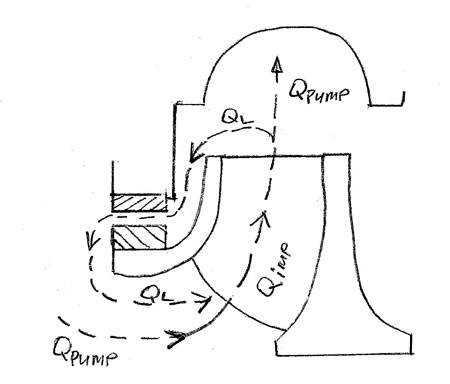 IMAGE 1. Parallel circuit: Flow through the impeller is greater than the actual pump discharge/suction flow by the amount of leakage. (Graphics courtesy of the author, September 2016)

… with the decreased pump power being the difference in comparison to the results shown in your paper.

My thoughts are as follows: 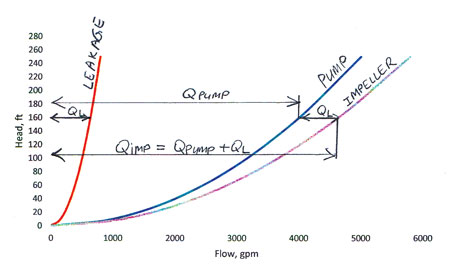 Side note: I understand it is unlikely that wear will affect only the impeller and not the wear ring clearance; as you said in your article “in many cases, tight clearance parts, such as wear rings and bushings, are the first to wear.” However, the above thinking can be applied to plugging of the impeller, which would also increase the hydraulic friction losses. Thus, one could distinguish plugging problems from pump wear problems (for which increased leakage most likely occurs). 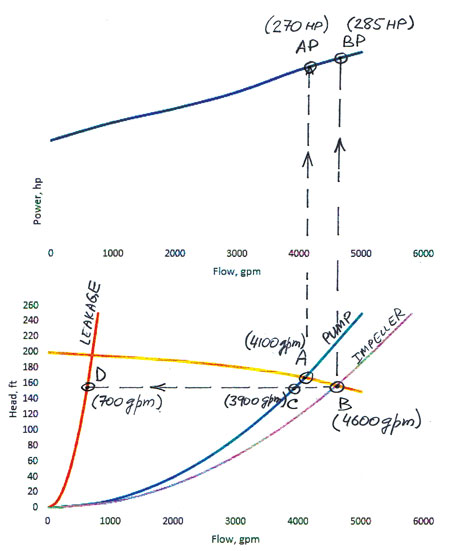 Your observations are correct. There is a difference in the effect of the pump curves between the wear of just the rings versus just the impeller (or a clogged impeller as you noted alternatively).

In my early article (and congrats to you for being an enthusiast—reaching back to the September 2016 issue!), I focused on the rings issue, not the impeller per se. That is why there are “three systems” curves shown there (impeller, ring leak path, and net flow out to discharge), but only one “pump” curve (the impeller stays the same). But now, in your example, the pump curve for the “system” does not change, just the impeller curve changed—it went down in pressure because of the increased hydraulic losses due to either “rust-up” or blockage (more friction in the impeller passages).

Both flow and head decreased significantly—a lot of friction. Clearly, it is not an efficient operation as much of the pressure goes to friction losses instead of the “good pressure” generation. Thus, the fluid power is reduced, and total power follows, but not as drastically as it would if attributed by friction losses only, as the pure reduction of flow and pressure also affected the power by reducing it.

The second effect is actually stronger, and therefore the total bias is to lower power. I did not bother to calculate this exactly, but if you take any pump curve example from any catalog, you can easily recreate this with actual numbers.

To explain further, if the impeller is completely plugged, or worn to nothing, there would be zero flow and zero pressure generation, yet there would be still some power read on the electric meter because the pump still consumes power on rubs of the bearings, seals and other “mechanical losses.” So, in that example, the power would be small, but still not zero.

Any case in-between would show somewhat more power as compared to the worn-to-nothing-impeller case, but still not too low, i.e., below the original power curve.

To summarize: If an impeller wears out or gets plugged, flow drops, pressure drops, efficiency drops and power drops. Or in essence, everything drops.

Keep up the good work, and keep on pumping! 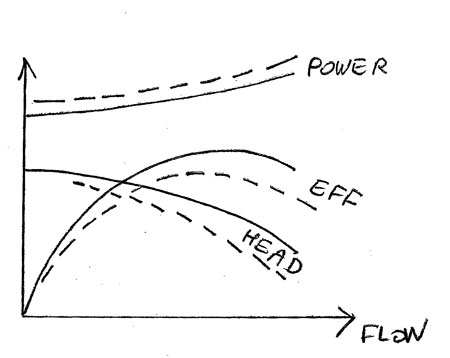 Thank you for the response!

Your explanation is excellent. I understood everything. Your comparison to a “completely worn pump” was particularly useful.

I’ve thought about this some more, and I have one more question. What do you think about this observation: I brought up the case of a clogged/plugged pump, and you confirmed that a “completely plugged pump would generate zero flow and zero pressure but would still consume some power due to mechanical losses.”

However, practically speaking, I think it is unlikely that whatever material is plugging the pump would not also get into the rotating surfaces (for example, radial bearings) and thus increase the mechanical losses, which would result in an increase in bhp.

Thus, with a plugged pump, bhp may increase or decrease depending on the relative impact of impeller plugging versus an increase in mechanical losses.

Would you agree with that statement? In your experience, what have you seen more of:

The increase or decrease of power would depend on the nature of the restriction. In most cases, for example, a rag is sucked into the impeller inlet, the power would decrease for the reasons I explained earlier—as the flow drops a lot, so does the pressure. The remaining power (bearing losses, seal faces, etc.) are small in comparison to most pumps. A 100-horsepower (hp) pump may have 3 to 5 hp in such “mechanical” losses.

On the other hand, if a rag gets jammed between the clearances of the shaft sleeve and its bushing, or within the wear ring clearances, and gets lodged there tightly, it can actually jam the pump, and even break the shaft due to such seizure, or at least partial seizure. In that case, the power could become extremely high, even exceeding the motor power to turn the rotor—in other words, “smoking” it.

Thus, we need to understand the difference between the power drop due to wear, and an increase in power (even significant) due to jamming. I hope this clarifies it.

Lev Nelik (aka “Dr. Pump”) is president of Pumping Machinery LLC, an Atlanta-based firm specializing in pump consulting, training, equipment troubleshooting and pump repairs. Nelik has 30 years of experience in pumps and pumping equipment. He may be reached at drpump@pumpingmachinery.com. For more information, visit www.pumpingmachinery.com/pump_school/pump_school.htm.