How to Properly Manage Piping Loads

These forces can have destructive effects if not carefully considered in piping design.
by Jack Claxton, P.E., Patterson Pump Company, A Gorman-Rupp Company
11/16/2015

A primary objective in any pump installation should be to minimize loads on a pump induced by the piping system design. Piping in the vicinity of the pump should be properly supported and restrained to obtain optimal pump service life. If this is not accomplished, objectionable loads can be placed on the pump that can reduce the service life of the equipment, increase maintenance costs and the total cost of ownership of the pump or result in catastrophic pump failure. Piping loads placed on a pump will be transferred through the pump to the pump support structure and the foundation under the pump. If the loads are high enough, foundation problems can also occur.

In terms of load-carrying capability, pumps are a relatively weak element. Their capability is not comparable to piping, piping restraints or pipe anchors. Excessive loads can overstress and distort the pump casing, causing relatively tight internal clearances to be overcome and creating excessive misalignment with the driver. In severe cases, the piping loads can crack the pump casing. Proper piping-pump interaction is not automatic, so users should analyze piping loads to ensure that the pump's load capability is not exceeded. If the piping system design is carefully engineered, users can practically eliminate or manage piping loads to avoid these troublesome scenarios in most installations.

The piping near the pump must be carefully evaluated. A system designer should recognize that pump piping loads fall into three categories:

Often, solutions for piping loads do not address all three of these potential load sources. This can be a problem because a piping system designed to reduce or eliminate loads from one or two of these sources may induce excessive loads on the pump from the remaining source. System designers should consider the potential for excessive loads from each of these potential load sources and the unique characteristics of each installation.

While reoccurring piping design trends may be present in certain pump applications, a cookie-cutter approach to piping design can negatively affect pump reliability and maintenance costs.

Mechanical pipe strain caused by piping misalignment and piping excessive assembly tolerances is the easiest source of piping loads to visualize. A reasonably precise pump and piping installation will prevent such loads.

Piping flanges bolted to pumps should be close to the pump flange in their unbolted position so excessive force is not required to pull the flanges into the operating position. In general, the separation of the unbolted pipe flange from the pump flange should be within a small tolerance of the gasket thickness. In any case, a flange separation amount is excessive if it results in the pump flange moving some amount in line with the pipe when the flanged joint is unbolted. For small pumps, 0.005 inches is a good worst-case limit criterion and will be used throughout this article.

Piping flanges bolted to pumps should also be relatively parallel to the pump flange in their unbolted position. A tolerance of 0.001 inches per inch of flange outside diameter with a maximum of 0.010 inches typically ensures that the as-installed piping misalignment will not place undue stress on the pump. Because forces from other potential sources will be present, mechanical pipe strain loads should be kept low.

The effects of the fluid mass are often overlooked. If the piping is not properly supported, piping that is aligned with the pump in the dry state can move and improperly load the pump when the system is filled and prepared for service.

Pressure in a pipe causes expansion of the pipe, even if only a small amount, in all directions. Linear expansion is caused by the pressure acting on the projected area of the pipe corresponding to the pipe's inside diameter. 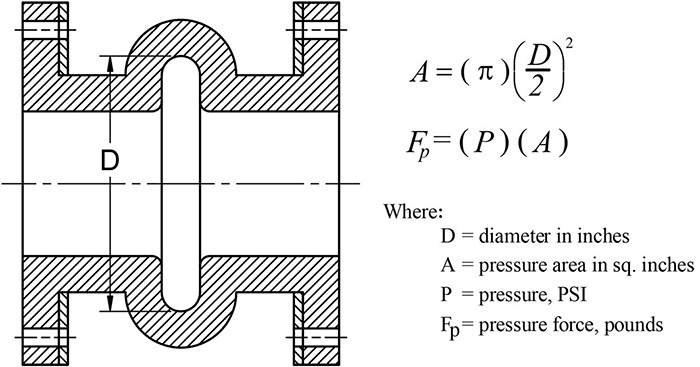 For a piping run that is unrestrained at either end, linear expansion is resisted by the piping as it stretches under the force of hydraulic pressure. Even cast-iron or steel pipe will stretch some amount. Any fittings in the piping will also be subjected to these forces.

The overall effective axial stiffness of a run of piping and the internal pressure times the projected area will determine how much the piping run will stretch if unrestrained (see Figure 1). Equation 1 represents the deflection of a spring.

Equation 2 uses a model for several springs in series.

For axially flexible fittings using thrust rods, "a" is the total cross sectional area of all the rods, and "L" is the distance between the surfaces of the flanges where the nuts on the thrust rods resist the thrust. If an axially flexible pipe fitting (such as a sleeve type pipe coupling or rubber expansion joint) is used without thrust rods, the axial stiffness "k" of the fitting may be considered to be approximately zero for the range of axial deflection values of interest here. This also results in an effective axial pipe stiffness that approaches zero.

Consider a piping run that is restrained at the pump end only. The linear expansion is resisted by the piping as it stretches under the force of hydraulic pressure, but all of the expansion is away from the pump with little to no pressure reaction on the pump.

Typically, in such an installation, resistance from sliding friction in a pipe support or an orthogonal run of pipe created by an elbow or a manifold resists the axial deflection, and creates a reaction force.

For a piping run restrained at the pump end and the other end, the restraint opposite the pump can be in the form mentioned above or a pipe anchor. Other restraints include situations in which the pipe attaches to a manifold, passes through a wall or turns down into the floor. The ability of these restraints to resist the linear stretching is typically far greater than that of the pump.

For our purposes, the deflection at the restraint at the opposite end of the pipe is zero. Because the stretch in the pipe will be resisted by the pipe and the pump, this results in a reaction load of some magnitude on the pump that is also transmitted to the pump support structure, baseplate and foundation. This reaction load on the pump can be compared to the rated nozzle load. 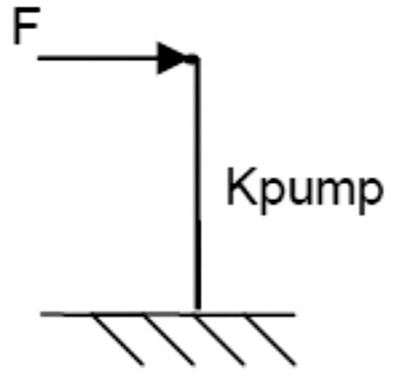 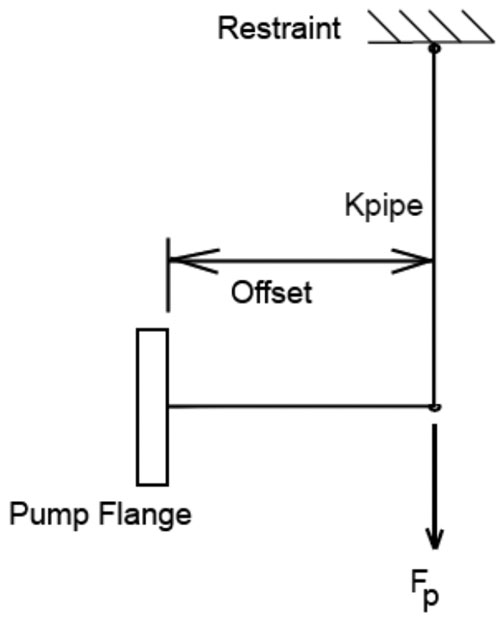 For a certain value of deflection to be achieved at the pump flange, the piping must stretch and the pump flange must deflect the same amount, with some component of Fp being restrained by the piping and some component being restrained by the pump. This calculated reaction load can be compared with the rated nozzle load for the pump to make sure the rated nozzle load is not exceeded.

In this model: dp = Fp/ktotal Equation 4

Recall that kpipe is calculated for the various pipe components as discussed, and Fp = (P)(A).

Knowing Fp, kpipe and kpump, deflection d for the installation can be calculated. The reaction load on the pump is not F p = (P)(A) because this force is resisted by both the pipe and the pump. An exception would be a case where the pipe stiffness approaches zero.

This practice is strongly discouraged for the following:

Another model (see Figure 3) is used to determine the reaction load on the pump to compare it to the rated nozzle load. Consider for any force F on the pump nozzle restrained only by the pump, the deflection is show in Equation 6.

Using this model, the value of kpump may be determined by applying a known force on the pump and measuring the resulting deflection at the flange.

Historically, some pump nozzle load standards have been based on maximum allowable deflection when subjected to the nozzle load, an approach that lines up with this method of analysis.

Using Equations 4 and 5, Equation 8 for the reaction load R can be derived.

If this analysis method is applied in an installation that does not use nozzle loads that have been based on a maximum allowable deflection criterion, the piping design should ensure that the deflection dpipe from the piping alone using Equation 9 does not exceed 0.005 inches for best results.

However, such a piping design can be difficult to achieve, and a deflection of 0.010 inches is unlikely to harm the pump. In this case, the deflection dp at the pump flange will be less than the deflection dpipe from the piping alone because of the resistance to deflection contributed by the pump.

Axially strong piping systems better enable the objectives of acceptable nozzle loads and deflection to be achieved. These insights underscore the need to coordinate the piping and pump so they successfully interact.

If an elbow at the end of the piping run results in an orthogonal run of pipe, the effects of pressure reaction forces may be evaluated by using the effective piping stiffness for that run of pipe (see Figure 4).

In this case, the stretch of the offset pipe is calculated using the equations for Fp and kpipe to reflect the characteristics of that run of pipe.

The resulting deflection dpipe can then be divided by the offset distance. If this resultant is less than 0.001 inches per inch with a maximum of 0.010 inches when multiplied by the pump flange diameter, then the effect of this force is equivalent to the flange parallelism criterion for mechanical pipe strain and is acceptable.

Read the second part of this article here.

Jack Claxton, P.E., has been involved with pump engineering for Patterson Pump Company since his graduation from Georgia Tech. in 1975. He is currently vice president, engineering.