How to Reduce or Eliminate Air Entrainment

I didn’t plan on writing about air entrainment again, but recent field issues pushed me to revisit the subject. In recent months, I have been involved in four cases of misunderstood pump performance where air entrainment was determined to be the main culprit.

Air entrainment may sound like and be confused with cavitation in an operating pump. The difference is that cavitation is the formation and subsequent collapse of vapor bubbles, while air entrainment is simply air bubbles that were in the process stream before the pump and will remain there after the pump. The bubbles may change in size but typically do not collapse when running through the pump.

Air entrainment in very small amounts can actually be a good thing. Many users will inject up to 0.9 percent air to cushion the effects of cavitation. However, air entrainment even in amounts of 1 to 2 percent will cause pump performance to drop dramatically. Poor pump performance is often confused and erroneously blamed on a multitude of symptoms other than air entrainment. A thorough root cause analysis in addition to education regarding the matter will show air entrainment is a much more common pump ailment than initially believed. This issue is a rising trend and has become more common for several reasons. Pulp and paper companies inject air in stock/slurry mixes, especially as an increase in recycling is occurring. Oil and gas industries are working to pump more dual phase fluids at the wellhead and downstream, and wastewater treatment plants are using more dissolved air flotation (DAF) systems.

Additionally, the industry is seeing an increased use of closed loop systems and a drive for less expensive, but consequently more shallow cooling tower basins. Further, the chemical process industry (CPI) and general industrial plants have renewed and are increasing financial pressure to design systems with smaller “footprints.” Filed under the heading of “unintended consequences” is the result of shorter and smaller storage tanks and process vessels. The shorter tanks equate to lower submergence values, which then have a higher probability of creating vortices and the smaller vessels yield reduced volume and consequent reductions in transient times for air bubble mitigation.

Why Are We Concerned About Air Entrainment?

Increases in air entrainment more than 1.5 to 2 percent will have immediate and deleterious effects on the pump from both an immediate performance aspect and a mechanical aspect in a protracted way.

As air bubbles become trapped at the pump suction, they block the fluid flow, and the pump performance will drop off. The flow rate will decrease, the developed head will drop off, and the efficiency will decline. Air entrainment even at values as low as 2 to 4 percent will cause increased pump vibration, which leads directly to premature bearing failure. Vibration is frequently caused by the unbalanced hydraulic loads on the impeller due to partial air blockage.

The unvented air also collects in the seal chamber (standard stuffing box configurations) to create air pockets that cause dry running of the mechanical seals. Dry/non-lubricated seal face operation contributes to shortened life and ultimate failure. If you hear a squeal when the pump starts, it is usually the seal faces running dry.

Air entrainment is one of the major contributors to broken pump shafts because of the hydraulic surging and axial shuttling that occurs from a pump that is stalled one second (no load) and pumping the next (full load) in an endless and unintended “go to” loop of stress fatigue cycling.

Air entrainment also introduces unwanted free oxygen into the system, which is the major component in both general and chloride stress corrosion formulas, just to name two types.

Reducing or Eliminating Air Entrainment in the System

Submergence is an often overlooked parameter. The proper level of submergence is critical, and vortexing is the most common source of undesired air introduced into pump systems. Improper submergence creates the conditions for the vortexing phenomena, which introduces large quantities of air leading to pump damage in a short period of time. If the submergence is insufficient, you can add vortex barriers, raise the height of the liquid level or increase the size of the suction line opening effectively reducing the fluid velocity. Just because you fail to see vortexing does not mean that it is not occurring.

Properly fill and vent the system initially. I have witnessed many occurrences where the operator did not properly vent the system or vent the high points, casings or stuffing boxes. Sometimes it is prudent to “jog” the pump a few times for a short period (10 to 15 seconds +/-) to “sweep” the air bubbles away and downstream, away from the pump.

No high point vents are installed, or if manual vents are present, they are not exercised. Automatic air release valves are not maintained.

You cannot vent an operating pump. The rotating impeller acts as a centrifuge where the heavier fluid is expelled outwards while the lighter air remains at the center where it also blocks the impeller suction eye. When you vent the casing on an operating pump, you may get some air out and then fluid. But if there is air at the eye, it will likely remain there. Top centerline discharge designs like American National Standards Institute (ANSI) pumps are designed to be self-venting. Fluids that are directed to the supply source should not be allowed to free fall into the tank. If this is the case, then the area should be as far as possible from the pump suction. Weirs and/or divider barriers should be installed.

Not sure if you have air entrainment? You can conduct some simple tests that are covered by the Hydraulic Institute (HI). In general, you capture samples and analyze them. You can also calculate if you have proper submergence. Submergence charts are another handy tool, but you need to have one foot of submergence for every foot of suction side fluid velocity. You can look up your flow rate and pipe size to determine the fluid velocity in the “Cameron Hydraulic Data Book” or “Cranes Technical Publication 410.”

In recent years, there is a financially driven trend to reduce the size of suction supply tanks. On closed systems and systems with returns or air entrained supplies, the tanks can be designed and built to present a “torturous path” for the fluid. A system of weirs, barriers and baffles can be engineered to present the maximum amount of hold time/ transient time for air bubble elimination/mitigation.

For most simple systems using Newtonion fluids (no slurries) I suggest four to five minutes transient time as a respectable design-versus-cost compromise.

In general, for every type of centrifugal pump and impeller design, there are different results when pumping fluids with entrained air. It is a difficult task to give a simple answer of what will or will not work in determining inconvenient yet accurate results. There is no easy magic formula app at this time. The specific speed (NS) and suction specific speed (NSS) are both relevant factors. Typically, impellers of NS higher than 3,000 will perform better than impellers below 3,000. Also, the actual impeller size, suction eye diameter, speed of the pump and the number of vanes will be factors.

One method to deal with entrainment is to open the clearances of the pump beyond normal recommendations. Many operators have success with doubling the clearance. The pump will be less efficient, but it will operate.

In flooded suction situations, if the pump does become air bound, you can stop the pump and allow the bubble to pass through and escape the pump and then restart the pump.

Some operators have incremental success using a larger impeller than the hydraulic conditions call for (based on zero air entrainment).

A less frequent and perhaps more desperate approach is to add an inducer (attached to the impeller); this route often requires outside technical or engineering assistance. 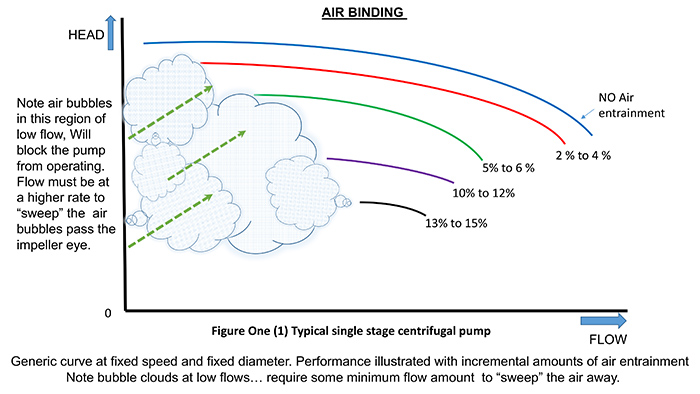 Minimum flow rates will also play a major role when managing air entrainment issues. The higher the air entrainment percentage the more flow that will be required to push or sweep the air bubbles pass the impeller eye (see Figure 1). So, operating the pump to the left side of the curve can lead to air binding blockages.

Often times, operators believe that a pump problem is cavitation when the real culprit is air entrainment. Like diagnosing some diseases in the medical field, the process of eliminating other reasons that could be causing the symptoms is how the conclusion is formed. If you look at the components that make up the formula for NPSH available, you can determine action steps to potentially reduce the effects. If you raise the static suction head or cool the liquid, it should reduce the effects. Or if you slow the pump down or throttle back on the discharge, the symptoms should reduce.

Air entrainment issues are often ignored or mistaken for cavitation and will create performance and mechanical issues with a centrifugal pump. Reduce or eliminate the air to prevent problems with shaft failures and premature bearing and mechanical seal failures.