How to Stop Vibration Issues Before They Start

Resonance can be a serious problem for new or modified pump installations. Pump resonance issues are best avoided before purchase with appropriate engineering, modeling, contract/purchase order language, oversight and commissioning to minimize the risk of accepting a costly and unreliable machine. New or modified pumps and drivers can result in operating frequencies that excite natural frequencies of the system, causing unacceptable high vibration that can delay commissioning, exceed allowable operating limits, shorten life and decrease reliability.

Machine natural frequencies are frequencies at which the machine tends to vibrate when excited by a cyclic force at or near the one of the natural frequencies. When this happens, the energy from the input force is not dissipated but rather amplified, creating a resonant condition. In other words, a small pump vibration amplitude at a natural frequency can be amplified to a severe and unacceptable amplitude. Effective mass and stiffness of the system determine the natural frequency, both of which can be difficult and costly to change after installation. Here, system is defined as the driver, pump, bearings, attached piping, base and foundation.

All pumps are susceptible to resonance, but special attention should be given to variable speed pumps. As expected, variable speed pumps have a much greater chance of exciting natural frequencies since excitation frequencies vary with pump speed according to the process demand. So instead of avoiding a few discrete fixed frequencies, multiple and overlapping bands of frequencies must be considered. This is where modeling can come in handy. It allows users to evaluate multiple design scenarios, dampening options and speed ranges. The upgrade of a pump from a fixed speed drive to a variable speed drive can easily place the pump in a resonance condition that did not previously exist. 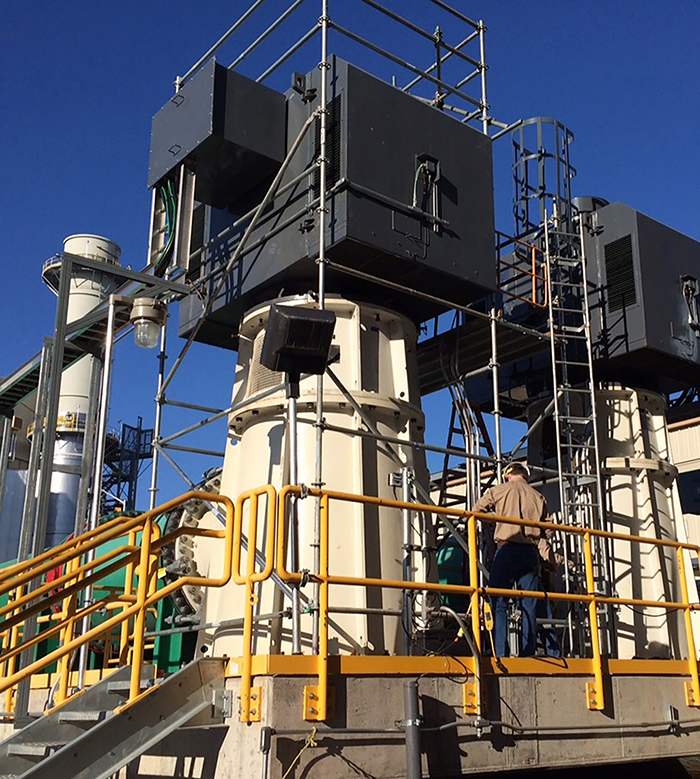 The first step is to ensure that natural frequency is addressed in the contract or purchase order for power generation and other process applications. The sample natural frequency contract language below might be too specific, or too vague, depending on the system provider, purchase value, criticality, size and complexity. Certainly other technical aspects of contracts like vibration limits, performance, etc., would be included.

The provider will guarantee that no operating frequencies of the installed driver/pump system will be within plus or minus (±) twenty percent (20%) of any natural frequencies of the driver/pump system. Operating frequencies are defined as, but not limited to, shaft speeds, vane pass, gear mesh, electrical, etc. System is defined as, but not limited to, the driver, pump, bearings, coupling, attached piping, supports, base, foundation, attached ladders/platforms, instrumentation and power conduit. The provider will make available design, engineering, modeling data, calculations and explanations at specified procurement hold points for review by the purchaser or the purchaser’s designated third party. Natural frequencies will be identified and measured after installation by an independent contractor using acceptable modal analysis testing. If natural frequencies are found within ± 20% of operating frequencies the provider will begin a root cause analysis immediately, and present a correction plan within xx days, and an engineered solution within xx days.

Even with appropriate language and technical due diligence carried out, unexpected resonance can still happen. All parties involved should be incentivized to enthusiastically find a solution.
So who are the responsible parties involved? In large plant construction projects with many systems being installed, the engineering, procurement and construction (EPC) company should be held responsible with contract language. However, their focus on potential resonance problems will not likely be a high priority in the grand scheme of the project. EPCs normally pass down the requirements in their vendor purchase specifications. For new singular system installations, the provider should be held responsible for the system being installed. When more than one provider is involved—for example in cases where the driver/pump is from one provider but the foundation is from another—make sure both are held responsible and the two are contractually required to exchange data/information. This might be a good case for the purchaser to hire a third party consultant. Another common scenario is replacing an existing driver or pump with a different design, which can cause a problem if the provider is not required to evaluate the existing system and foundation/support. 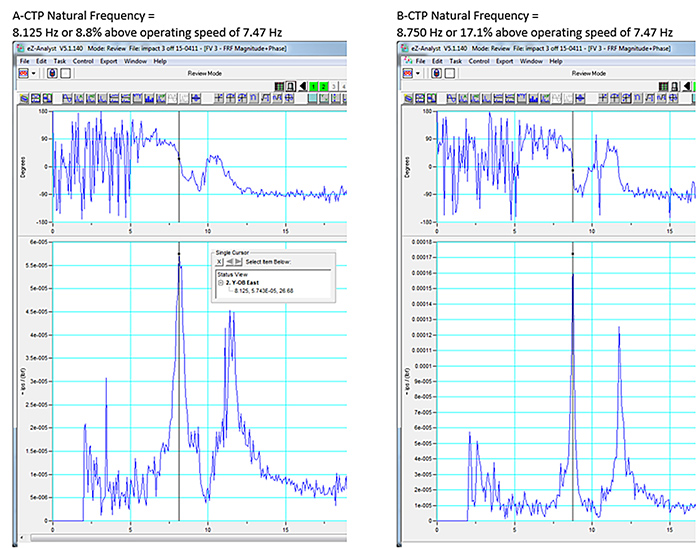 Two new 2,682 horsepower (hp), 448 rotations per minute (rpm), 92,600 gallons per minute (gpm), vertical circulating water pumps were installed as part of a new plant construction project (see Image 1). One pump operated smoothly while the other had 28 mils peak to peak vibration at 1x operating speed. Testing revealed the natural frequency of the smooth pump to be 17 percent above operating speed while the 28 mil pump was only 8 percent (see Figure 1). Both natural frequencies had very high amplification factors. The 28 mils vibration exceeded the allowable limits and natural frequency criteria required in the contract. In this case the EPC and providers worked to aggressively move the natural frequency per the contract language, and the problem was eventually resolved. 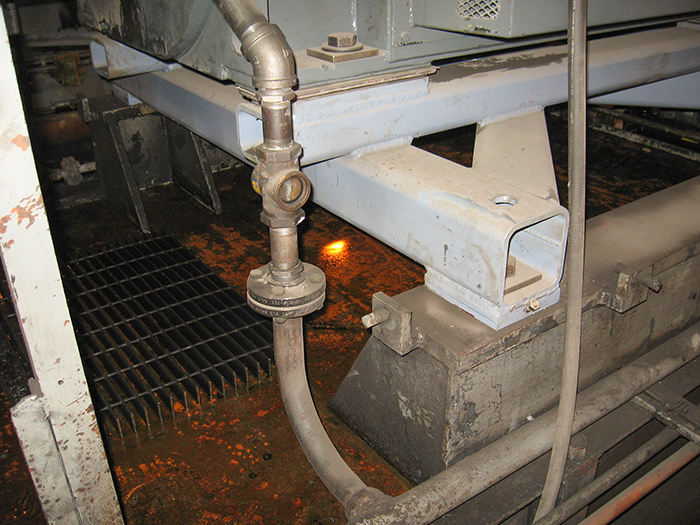 A new 5,500 hp, 3,581 rpm pump motor was purchased to replace a larger frame 1960s vintage motor. Due to the more efficient smaller frame of the new motor, an adapter was fabricated to mount the new motor to the old base. The motor vibration was high due to resonance (see Image 2). There was no natural frequency requirement written into the purchase agreement, but after significant time, testing and educating the provider, a new adapter was provided under warranty (see Image 3). Resonance-specific contract language and design oversight could have avoided
the problem. 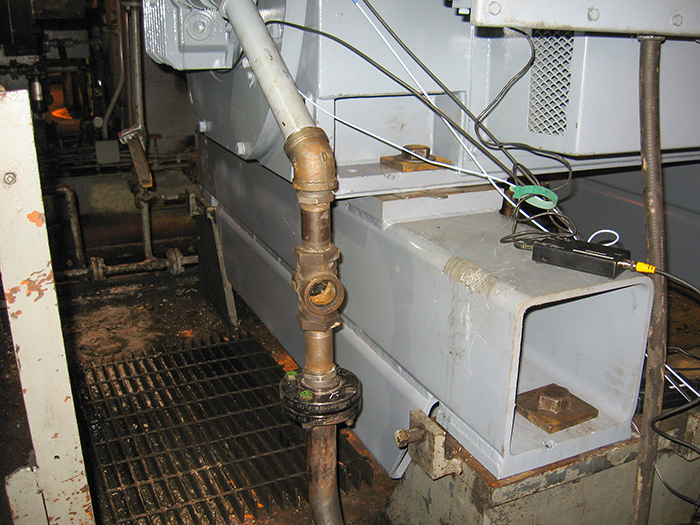 Appropriate contract/purchase order language, engineering, modeling, oversight and commissioning is good insurance towards minimizing the risk of a resonance problem. If in-house expertise is limited, then consider using a third party consultant for oversight depending on the specific project. Planning and foresight require effort, but pay off down the road.

Jeff Simpson is an engineering group leader for Louisville Gas and Electric Company and Kentucky Utilities Company, part of the PPL Corporation (NYSE: PPL, website lge-ku.com) family of companies. Simpson is Vibration Institute Level IV certified and has worked in the power generation industry for 32 years. He can be reached at jeff.simpson@lge-ku.com or 502-627-4354.