How to Use Casing Vibration to Assess Cavitation

This article will discuss a case of how measuring vibration can help detect cavitation issues. It will also show how this can relate to a bigger problem at the plant. Sometimes a proposed change of pump type is too drastic. Instead, detailed analysis and thinking should occur before replacement.

Plant management wanted to evaluate the pumps’ operation—their reliability and energy consumption. A field test was conducted to review and assess these issues. Pump C, driven by a 150-horsepower motor at 1,775 rpm with an 11.4-inch impeller diameter, was selected for the initial study.

As shown in Figure 1, a best efficiency point (BEP) was at 4,800 gallons per minute (gpm) for the 11.4-inch impeller. The flow varied between 2,800 gpm and 5,000 gpm, depending on the process demand. This corresponded to power consumption between approximately 130 horsepower (at 69 percent efficiency) to 140 horsepower (at 83 percent efficiency). The required variation of flow was accomplished by the main process (its piping and valving), while the pump isolation valves always remained fully open and were operated only when the pump was removed for maintenance, or as in this example, as a temporary method of performance reconstruction during the pump field test. 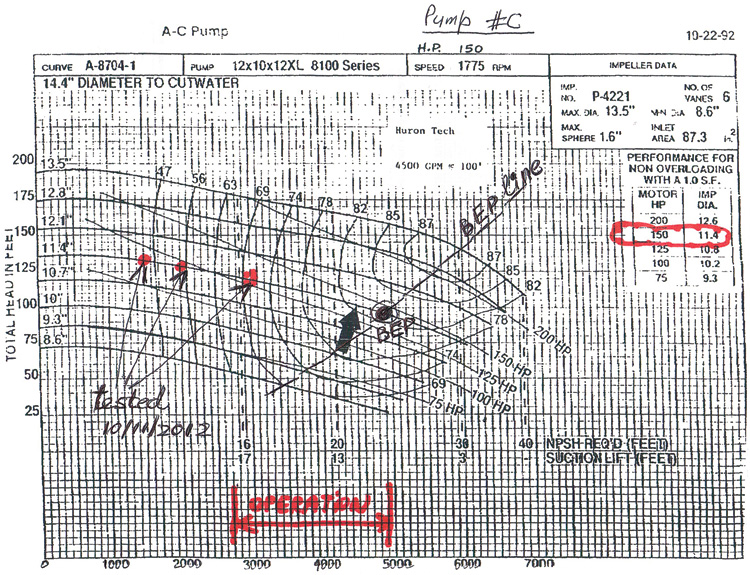 To verify the pump’s performance, the flow was varied by throttling the pump discharge valve—starting at 2,800 gpm, where the pump was operating because of the process demand at that time, to 1,600 gpm. The data was plotted over the original performance (see Figure 2). The pump appeared to closely follow the head-capacity curve (according to the 11.4-inch impeller size) and calculated efficiency, based on the measured flow, head and power (via amps). It tracked closely to the original values, no more than about 2 percent reduced as compared to the original values.

In addition, the flow and amps of all six pumps were recorded at their normal operation during the test, showing that the crystallizer condenser demand (pumps A and B) happened to be significantly greater (nearly 4,000 gpm) compared to pumps C and D and E and F, each of which were slightly below 3,000 gpm (see Figure 3).

Therefore, from a hydraulic performance standpoint, the pump operated as expected, provided satisfactory flow over the required range of operation and remained near its original efficiency with essentially negligible degradation (see Figure 3).

The main indicator of reliability degradation—typically indicating a need for repair or overhaul—is an increased level of vibration. To assess that, the overall level of vibration was measured at two locations—the pump’s inboard bearing housing and the suction/inlet portion of the casing housing.

Vibration data (also tabulated in Figure 2) are plotted as a function of flow in Figure 4 (discharge valve was closed in 5 percent increments). Vibration measurements taken at the bearing housing remained steady at approximately 0.18 to 0.19 inches per second, which was below the warning level (field criteria for the warning level was 0.30 inches per second and 0.50 inches per second). While this level was elevated compared to what would be expected from the new installation, it was low and acceptable for a typical field case example. 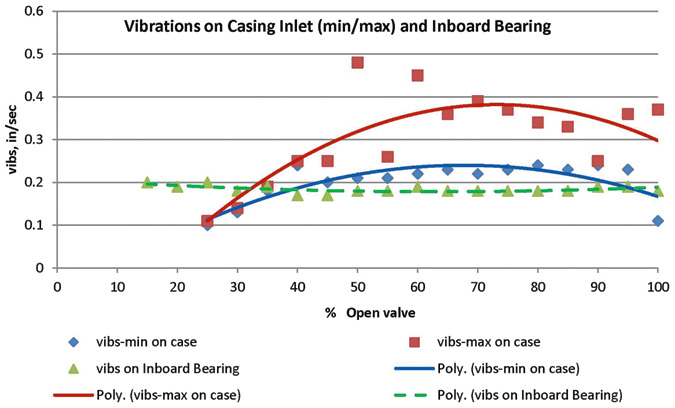 The vibration levels at the suction housing were not measured to evaluate their absolute values—which do not have an acceptable industrial criteria—but to help evaluate relative differences between the pump behavior at different flows. The “jumping around” of vibrations became more violent and showed a larger spread between the minimum and maximum values as the pump operated farther away from low flow. In addition, the sound of cavitaton became more pronounced as the pump approached higher flow.

When the valve was fully open, the net positive suction head available (NPSHA) was 21.6 feet, and the required (per OEM curve) was 16 feet. However, the net positive suction head required (NPSHR) was greater (above 20+ feet, exceeding the available) when the pump ran farther out on its curve, marked “operation” in Figure 1. Therefore, cavitation levels varied depending where on the curve it occurred specific to the demand of the process.

The need for action is usually determined by measurable economic impact on the pump life and satisfaction—or lack of—with overall plant performance. If pump performance fails to deliver the required flow for the process, a repair or change to the pump or the system should be considered. In this example, the pump flowed close to its original curve and operated in the expected operating region. The pumps satisfied the plant’s flow requirements.

From the energy/efficiency perspective, no significant degradation of performance occurred. Based on a computerized program estimating pump performance (www.mj-scope.com/pump_tools/pump_efficiency.htm), such a pump should theoretically have approximately 85 percent efficiency at 5,000 gpm and 100 feet of head (see Figure 5 on page 24). 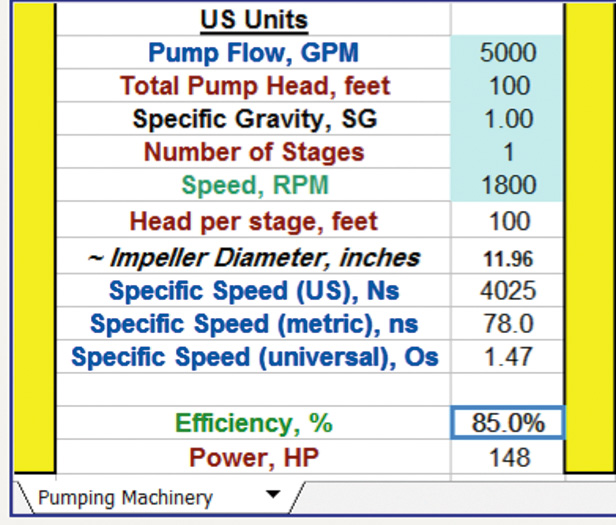 Figure 1 shows approximately 83 percent, which was not too far off, and the actual field-tested efficiency was approximately 68 percent, which indicates some internal wear. The difference between 83 percent and 68 percent translates to roughly 20 horsepower (15 kW) of lost energy, or $13,140 per year, assuming a non-stop, around-the-clock operation at a cost of 10 cents per kilowatt-hour. It should also be noted that the field test included losses from a pump and a motor. This means that the pump efficiency was actually somewhat higher compared to the test because half the lost energy could be attributed to the motor’s efficiency. The overall cost of inefficiency is likely to be around $6,000 to $8,000 per year.

A 15-percent time degradation in efficiency is not unusual for a pump, and typically can be restored with a pump repair or overhaul. This should include the restoration of the wear ring clearance to the original factory values. A typical pump repair can pay for itself within the first year.

Plant management should also review a history of repair costs over the years. If such costs are excessive, then more drastic measures could be recommended, such as changing the pump type or modifying the system. If the major cost of repairs was due to impeller replacements (necessitated by the effect of cavitation because of an NPSH deficiency), a better impeller material can usually solve that issue. For example, changing from a bronze to a stainless impeller can often improve the cavitation wear life by a factor of five to 10. Changing to a different type pump (for example, a vertical turbine pump to increase NPSHA) can also be considered, as long as the overall cost of such a changeover can be justified compared to simpler modifications to the existing pumps. In general, a double-suction, horizontally split-case pump design is more reliable and easier to maintain compared to vertical turbine pumps.

According to the field test, pump efficiency degradation was estimated at approximately $6,000 to $8,000 in saved energy costs per year. This is likely attributed to internal wear and could be rectified by a pump repair or overhaul. Pump suction conditions could be classified as marginal, and occasional cavitation occurred when the pump operated at higher flow demands. This could be improved by changing to a stainless impeller.

Modification of the installation to a vertical turbine design is not recommended. Although a vertical pump design provides more NPSHA, vertical turbine pumps tend to operate less reliably with variable flow rates. When flow is reduced—which is the nature of the process in which the tested pump operated—internal radial loads of long-shafted vertical pumps tend to move the entire rotating assembly into supporting/guiding bushings, resulting in wear, bending of the shafts and failures. Vertical pumps should typically be applied at constant flow rates, close to their BEP.

A practical way to approach this issue is to modify one of the existing pumps using the recommendations presented and evaluate its operation. If reliability and efficiency improve, then similar modifications can be applied to the other pumps. If, however, the test modification is not sufficiently effective, other modifications could be considered. However, they do not seem to be justified as the immediate next step at this point. Changing a pump is not always a good first reaction. When considering all the factors, the initial reaction can be surpassingly different—and usually much less expensive.