How is Variable Speed Pumping Used in HVAC?

How is variable speed pumping used in HVAC?

The energy conservation standard for pumps (10 CFR 431 Subpart Y), published in January 2016, recognizes that pumps and motors equipped with variable speed drives (VSDs) can save significant energy and the metrics in the regulation measure this.

In heating, ventilating and air conditioning (HVAC) applications of pump systems, the American Society of Heating, Refrigerating and Air-Conditioning Engineers (ASHRAE) 90.1 standard requires water-cooled unitary systems that are greater than 5 horsepower (hp) to have a VSD installed on the pump motor. 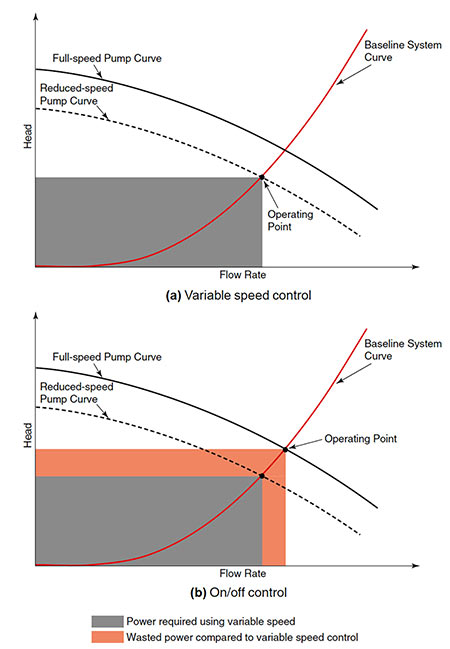 The energy savings in variable flow pumping systems are maximized in systems that are friction dominated, such as water circulating systems for heating and cooling.

Image 1 demonstrates the wasted energy that can be saved when the speed is reduced to a lower flow and head in a friction head dominated system.

VSDs allow the pump speed to be lowered or increased, depending on the needs of the system.

Reducing the speed of the pump reduces both the pump’s pressure and flow, which reduces power consumption.

While variable speed control can provide the most efficient, reliable and precise control to meet the system demand, it requires higher investment cost, is less suitable for high static or flat system curves, and requires consideration of mechanical design issues related to resonance, minimum speed and/or over speed.

To justify its use and ensure a reliable installation, it is important to analyze the system’s suitability for the speed range and the benefits of controlling the speed.