Torrential rain left 2 million gallons of water on the field, delaying a game
by Drew Champlin
12/07/2017

Heavy rainfall and flooding delayed Western Michigan University’s homecoming game against Akron, but an all-night effort to pump nearly 2 million gallons out of Waldo Stadium kept the game on track.

The game was scheduled for Saturday, Oct. 14, but torrential rain pounded the city of Kalamazoo, Michigan that afternoon. The 78-year-old stadium is in a flood plain and has three pumps that eject water to a 60-inch concrete pipe that Arcadia Creek flows through.

There were several catch basin inlets by the stadium that also drained to the 60-inch stormwater line. The line was at capacity, so stormwater moved backward and pushed water back around the stadium, contributing to the field flooding. 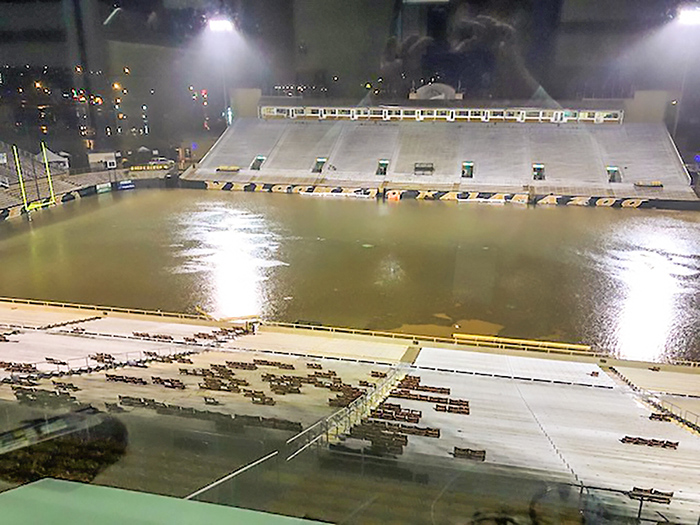 The creek was flooded. Eventually, water backed up and there were two feet of standing water on the turf.

After the adjacent baseball field couldn’t hold any more water, the first floor of the connecting Bill Brown Alumni Football Center began to flood. At that point, Peter Strazdas, WMU’s associate vice president for facilities management, made the decision to turn off the three pumps to keep the building from flooding more.

As Saturday went on, the rain finally stopped. The plan was to play the next day at 1:05 p.m., but a contingency plan was set to play at the field of Kalamazoo College, the nearby Division III school whose stadium sat on higher ground.

The all-night effort from WMU’s facilities team and Clean Earth Environmental Contracting Services kept WMU from having to give up a true home game.

“It was all about the will of the people,” Strazdas said. “My facilities team said, ‘We don’t play home games on someone else’s turf. We play on our turf.’”

But WMU needed help. Clean Earth provided four vector trucks and two large tanker trucks to transport the water elsewhere on campus. The effort was halted at 2:30 a.m. when another deluge put 12 inches of water on the field. That passed and, at 5:30 a.m., the entire turf was visible. 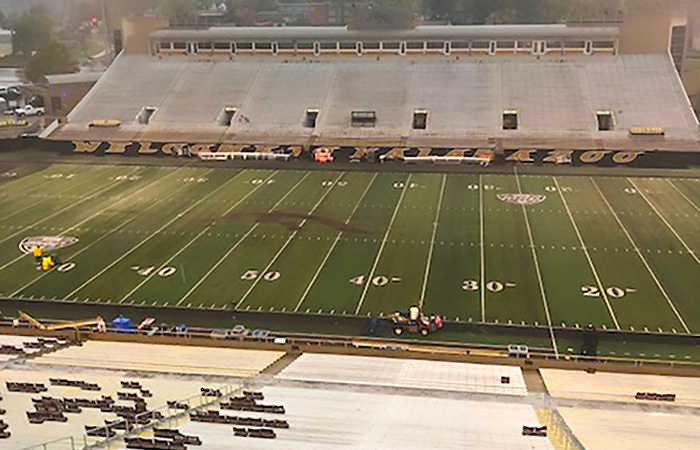 Strazdas said that out of every crisis comes an opportunity, and WMU is consulting with engineers on how to pump water elsewhere. There will also be more people and equipment on standby when more heavy rainfall is in the forecast.

Still, it was a victory for the school even if it didn’t show up on the scoreboard.

“We’re still pinching ourselves wondering how the hell we did this,” Strazdas said.

Drew Champlin is a managing editor for Pumps & Systems magazine. He can be reached at dchamplin@cahabamedia.com or 205-314-8264.