The Importance of Fasteners & Dynamic Components

Editor’s Note: This article concludes a series by the author covering topics related to predictive maintenance.

Part of the job scope in Taiwan (as discussed in “How Does Your Facility’s Maintenance Program Rank?” Pumps & Systems, June 2016, read it here) was to assist the end user in establishing a basic vibration monitoring program. The consultant guided the facility through the setup of a basic program similar to the one shared in the previous articles—all analog.

At one of the user’s facilities during the first round of data collection, the predictive maintenance team noticed that more than half of the facility’s small-frame pumps were running at a relatively high vibration level. At the scale’s lower end, they saw greater than 1 to 1.5 millimeters per second (mm/s) root mean squared (RMS) at all monitoring points. At the higher end, they saw 2.5 to 3.5 mm/s. There were even readings in excess of 4 mm/s.

The facility set its alarm value at 2.5 mm/s and its shutdown at 3 mm/s. After collecting and reviewing the data as part of the training, the consultant asked the question, “Was there any work recently completed on the pumps that had higher readings?” The answer was “yes.”

During a recent outage, a vendor was hired to check and correct alignment on a group of pumps. Initially, all of the pumps ran smoothly, but as time passed, they ran rougher and rougher. So the consultant then asked if facility personnel had checked alignment. The answer: “No, the vendor had realigned the pumps during the outage. The pumps are in alignment.”

After convincing the facility to check pump alignment, the predictive maintenance team started with a simple soft foot check—dial indication on the motor foot, loosen the mounting bolt and see if there is any lift. In this case, there was no motor foot lift; however, it was shocking that a 135-pound technician could loosen the motor mounting bolts with a 10-inch crescent wrench. When asked if the bolts had ever been tightened with a torque wrench, personnel returned a blank stare.

If you don’t tighten the bolts at or near their yield, they will loosen over time. And that is what happened. The bolts were not tight and the motors shifted over time, causing alignment issues and a corresponding higher vibration.

The moral of the story: Always torque your mounting fasteners or at lease use a cheater to tighten them as much as possible. A 10-inch crescent on a 5/8-inch bolt will not cut it. 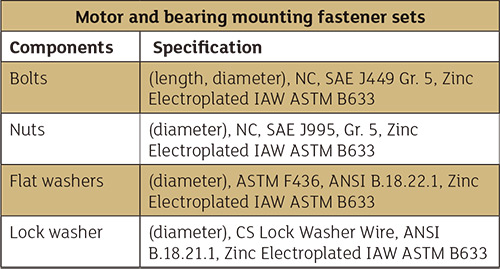 At a hazardous material remediation site in the Pacific Northwest, a transfer system was installed to move liquid waste over several miles from one storage area to another. The project dollar value was in the millions, and completion was being held up by high vibration from a pair of 300-hp multistage horizontal booster pumps.

The high vibration was not caused by an alignment issue. It was a resonance issue and, of course, a variable frequency drive was involved.

However, when the consultant’s team double-checked the common causes of vibration—such as alignment, loose nuts and bolts, electrical, and structural—they found that the washers that were part of the motor mounting were not rated for graded fasteners. They installed SAE Grade 2 washers under SAE Grade 5 bolts. And as you torqued up the bolts, the washers would collapse under the bolt heads, extruding into the motor feet bolt holes.

They discovered the issue when checking bolt tightness and torqued the bolts to specific criteria (a torque value for that size and grade of fastener). As the washer pulled through the motor mounting holes, it would affect the alignment. Basically, they could “snug up” the bolts and maintain alignment, but when they went to torque the bolts after the final alignment adjustment, they would be outside of the alignment tolerance. The fix: hardened washers—ASTM F436.

At another hazardous material remediation site in the Pacific Northwest, a facility that was being decontaminated and torn down used the original exhaust ventilation system to prevent the release of hazardous material. The system included eight electric, 125-hp, belt-driven overhung fans and two backup steam-driven (about 75-hp) fans, which took suction on a common plenum and released exhaust through a common stack.

These fans had been in operation since 1943. Many still had the vintage 1943 open drip-proof motors that were originally installed. Because of the parallel operation and slightly different fan curves, these fans had a tendency to produce flow oscillations—a pressure disturbance—as if the fans were operating way to the left side of the curve. The result was a high axial vibration. This had taken its toll on these older fans, historically plagued by fan wheel cracks and bearing issues.

In 2011, one of these fans failed catastrophically. The fan wheel hub shattered, allowing the fan wheel to unwind itself in the housing and shear the fan shaft bearing bolts from the mounting pedestal with the fan shaft crashing into the motor. These fan shaft bolts were three-quarters of an inch, and the wheel failure sheared them flush with the bearing pedestal. No matter what, the bearings should never be ripped from the mount.

Over time, with many bearing replacements, a spacer plate was added and welded to the bearing deck. Instead of drilling through the spacer and the bearing deck to relocate the new bearing bolt holes, the plates were drilled and tapped and the bolts were installed in blind holes—the spacer plate (a piece of A36 cold rolled, very soft material) was acting as the nut. Over the years, as new bolts were procured, they were ordered way too long. Personnel stacked washers under the bolts for a spacer so they could be tightened. The installed bolts were 304 stainless steel—another very soft material. Between the soft bolting material, extended bolt length and limited thread engagement, the bolts failed when they were stressed and turned a wheel failure into a complete fan failure. This fan had to be permanently removed from service.

The facility let its design safeguards (configuration management) degrade, and it had serious consequences. When securing a dynamic component, use SAE Grade 5 fasteners or better. Use hardened flat washers and use lock washers.

For securing motors, motor-mounting plates, mounted bearings or any item supporting a shaft where shaft velocities exceed 1,500 feet per minute (ft/min), as a minimum, SAE Grade 5 fasteners sets should be used. A fastener set includes bolt, nut, two flat washers and one lock washer. When installing fastener sets, a minimum of five threads and a maximum of 10 threads will extend from the nut. Blind mountings should not be used. All fasteners sets should be torqued after final adjustments. For adjustable motor-mounting plates generally associated with belt-driven equipment, where mounting studs are provided as a component of the mounting plate, SAE Grade 5 nuts, hardened flat washer (F436) and lock washers should be used to secure the motor to the plate. In lieu of a final torquing, tightening the nuts to fully crush the lock washers plus a quarter-turn is acceptable.

Mark Jennings is an engineering consultant. He previously worked for ARES Corporation. Prior to ARES, Jennings owned and managed Maintenance Concepts Inc., a company that provided PdM services, outage management and engineering services to industries located throughout the Pacific Northwest. For ARES Corporation, Jennings provides PdM program training, PdM technology application, commissioning-related PdM and consensus standard interpretation related to PdM. He may be reached at greycarrera@frontier.com or (509) 531-5614.