When designing a pump system, process engineers typically calculate the static and dynamic pressure drop of the pipework, fittings, in-line equipment and in-line instrumentation at a fixed design flow rate. They then add the control valve’s pressure loss, which often is derived from experience. This is traditionally a fixed value of between 0.2 and 0.5 bar. Another way is to allocate a certain percentage, for example, 25 to 50 percent of the dynamic pressure loss of the system-head curve’s to the control valve’s pressure drop.1

Any absolute or relative control valve pressure loss must refer to a certain opening, or travel, typically 60 to 80 percent of full travel. Instead of choosing a certain travel, a percentage of the valve sizing coefficient or rated Cv (Cv at full opening) may be fixed, for example, about 60 to 75 percent.2

Depending on a valve’s parameter, the flow rate will increase when the valve is opened to 100 percent travel. However, an operating controller will respond to disturbances by oscillating so the maximum flow rate at 100 percent travel cannot be reached in reality and constitute a limit. Nevertheless, a nearly fully opened valve allows increasing flow, hence higher production, and eliminating a bottleneck or pinch is possible.

Figure 1 shows a system in which a centrifugal pump (P) moves liquid from a suction side vessel (V1) to another vessel (V2). Immediately after the pressure nozzle of the pump, a bypass line forks off; this recycles part of the liquid through a resistance device to V1. The main flow passes an actuated control valve (RV) on its path to V2.

The control valve’s opening, or travel, is determined by a controller, in this case, the level controller (LC) in vessel V1. The controller could also be located somewhere else in the process, for example, a temperature controller in the bottom of a distillation column.

The pipework with all of its members exerts a dynamic pressure loss; so does the control valve RV. In addition, there is a total static pressure difference that consists of the difference in pressure between V1 and V2, plus pressure from the geodetic height. 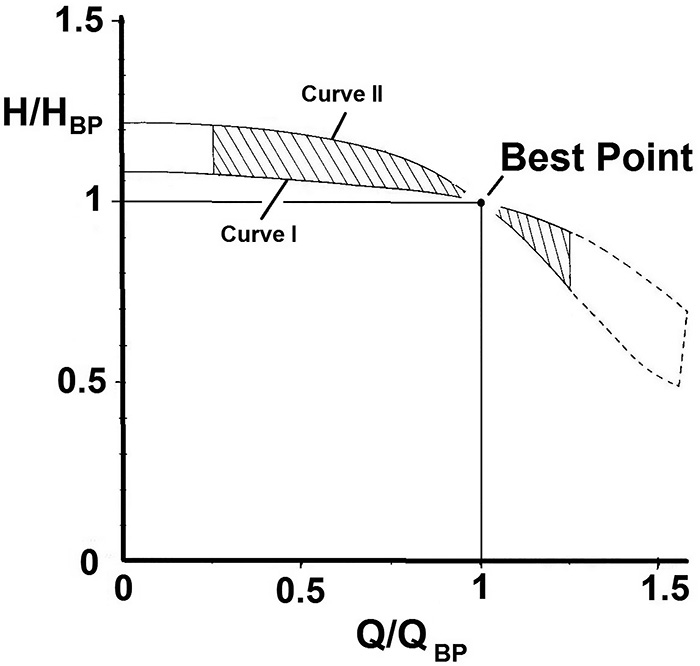 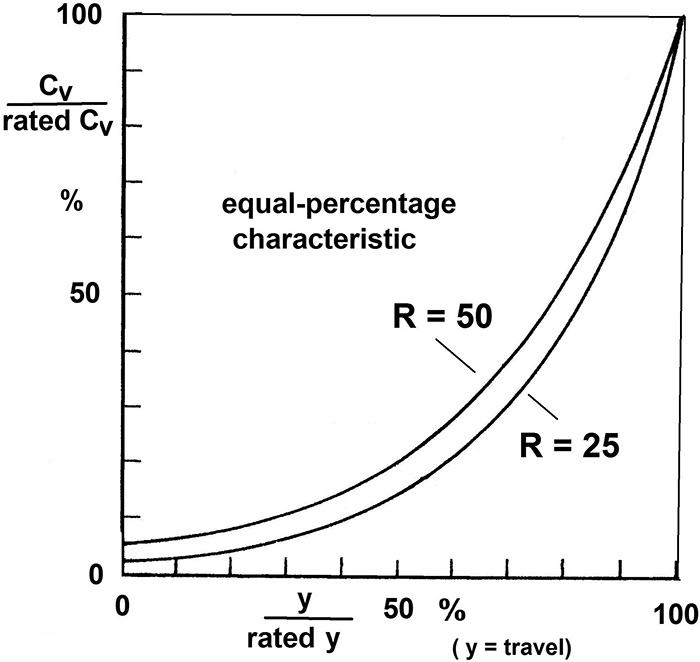 The pump system can be characterized by three parameters. The first describes the relationship between pressure loss of the control valve and that of the system (see Equation 1).

The dynamic pressure loss at design flow rate Δpdyn,S is divided also by the sum of the dynamic pressure loss plus static pressure difference Δpstatic. For example, Δpstatic = 0 reflects a closed loop system, B = 1. Changing the travel of a control valve will change flow rate. The relationship between the capacity or flow rate versus travel follows a specific curve. Equation 4 demonstrates the equal-percentage characteristic, which is found in the majority of valves.

Figure 3 reflects this in dimensionless terms, for example, Cv divided by rated Cv over the travel/rated travel, with the parameter being the rangeability R = 25 and R = 50, respectively.

Influence of the System’s Parameter

A calculation of the system in Figure 1 was performed with some simplifications (for example, a negligible pressure drop on the suction side and also from the pressure side of the pump to the fork-off point of the bypass).

The calculation assumed a fixed bypass flow of 10 percent of flow at BEP, and the pressure drop of the control valve at design was fixed to a travel of 70 percent. The control valve featured an ideal equal-percentage characteristic and a rangeability of 25 and 50, respectively.

Calculation results are shown in Figure 4 and are based on pump characteristic Curve I. The relative maximum flow rate is plotted versus A, the relative pressure drop of the control valve at design. Parameter B constitutes the system’s relative dynamic pressure loss. The same calculation was performed based on the pump’s characteristic, as demonstrated by Curve II (see Figure 5). 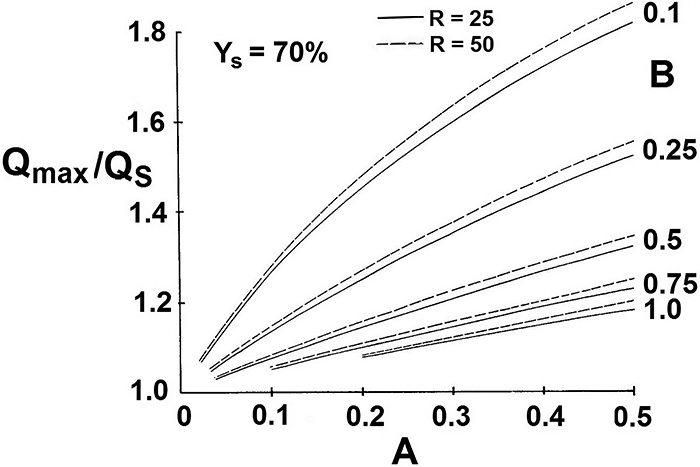 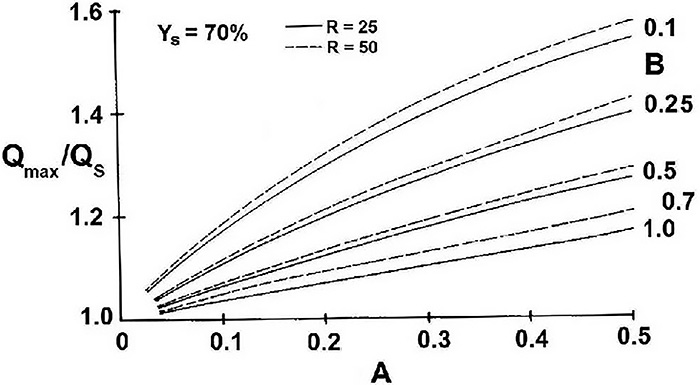 The previous scenario may be highlighted by another example having a configuration like the system in Figure 1 and where a control valve of low rangeability (base case) is replaced by valves with higher ones.

The H-Q diagram in Figure 6 contains the pump’s characteristic and the system’s pressure drop curve without the loss of the control valve. 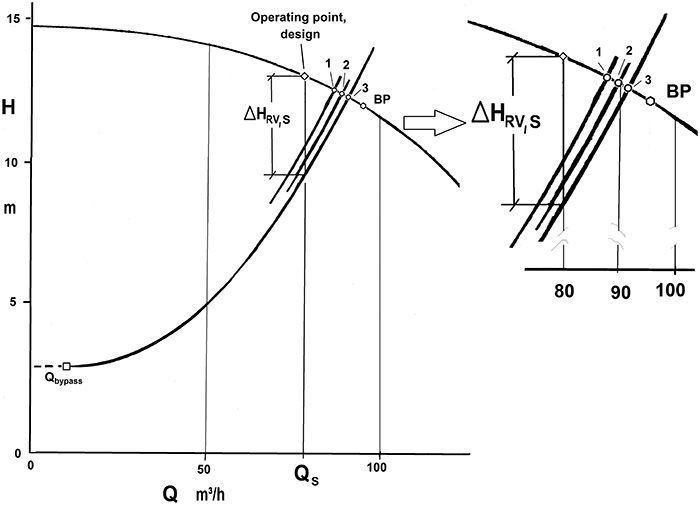 Figure 6. Example of the influence of a control valve’s rangeability on maximum flow rate.

Adding the control valve’s pressure loss, which had been fixed to ΔHRV = 3 m at a dimensionless travel of YS = 70 percent, results in an operating point 1 (base case) that matches the design flow rate and a bypass of 10 m3/h.

The pressure loss curve of the system with different rangeabilities of the control valves was calculated using the appropriate rated Cv, converting it into the frictional loss factor, which is subsequently used in the Bernoulli equation.

The friction loss factor decreases with increasing rangeability; in an extreme case, it becomes more or less equivalent to that of a full bore pipe having the length of the valve.

Based on the design flow rate QS, the relation Qmax/QS may be taken from Figure 6:

This example illustrates that a high rangeability typically does not have a great effect, but this result depends on the individual system and the parameter chosen.

Additionally, at the same design pressure loss and design travel of the control valve, an equal-percentage valve characteristic allows a higher maximum flow rate because of a steeply increasing Cv.

Nevertheless, whenever the travel approaches 100 percent, controllability may deteriorate because a small change of travel causes a relatively large change in flow rate.

The parameter “design flow rate” and “design pressure loss and travel” of the control valve establish the reference values. As a result, increasing a specified design flow rate by 10 percent, for example, without also increasing the pressure the pump delivers does not mean that the system will necessarily achieve this flow rate.

Walter P. Schicketanz holds a Ph.D. in chemical engineering. He worked predominantly in planning and design of plants for an international chemical company. After retirement, he was co-founder of the company Pumpenfachingenieur GmbH, Austria.