Heavy and light dust both pose major problems for bearings. Heavy dust is a particle above 50 micrometers (μm) in diameter that can become airborne. Because the particle falls at about 200 millimeters per second (mm/s), it will rarely leave the production area. Heavy dust is readily seen as a cloud with the naked eye.

Light dust is any particle below 50 μm in diameter and may stay in the air for more than 30 minutes. Light dust can travel well beyond the manufacturing site but commonly settles as a fine coating on machinery, bearing houses and other surfaces.

Heavy dust and light dust both threaten bearing integrity. Even light dust suspended in the air will eventually find its way into a bearing—despite the protection of bearing housing.

All rotating equipment "breathes" at the bearing. As equipment rotates, the bearing housing heats up. The oil/air mixture inside expands and is forced through the seal. When the equipment cools, the mixture contracts and returns through bearing seals into the housing.

The mixture returns to the housing laden with atmospheric contaminants, such as heavy and light dust. This dust builds up inside the bearing and eventually contaminates the oil. Bearing seals must effectively facilitate this breathing cycle in order to extend equipment life.

Modern labyrinth seals with an air purge design are suitable for use in extreme environments, such as oil, gas and petrochemical facilities. In these applications, contamination may completely cover the seal or equipment. The labyrinth seals use a positive air purge in combination with mechanical seal pressure balancing technology to maximize the performance of the seal and minimize air consumption.

Moisture can enter bearing housings as airborne water vapor through old-style labyrinth seals or lip-seals. Hose-down operations can introduce a stream of water that leaks through the seals. Other entry points include the breather vent, non-pressure balanced constant-level lubricators and abraded oil ring material.

Even though the air in a production plant may appear to be dry, moisture is always present. Warm air holds more water vapor, which means hot air around machinery will have a higher relative humidity than other areas of the production plant.

Water vapor enters the bearing when the housing starts to breathe. As the machine cools, water vapor accompanies the airborne dust as both are sucked back into the housing. The equipment cools and reaches the condensation point when water droplets form inside the bearing. As dust and moisture accumulate, corrosion occurs—eventually leading to failure.

The bearing house temperature must stay above the condensation point to prevent humidity and moisture contamination. Temperature control to this degree is impractical in many oil and gas facilities. Modern labyrinth bearing protection creates a vapor seal against both moisture and dust when the shaft stops rotating.

Labyrinth designs also protect against other sources of moisture contamination, such as powerful water jets. Some labyrinth seals can operate in totally flooded or submerged environments, providing the bearing with complete protection. 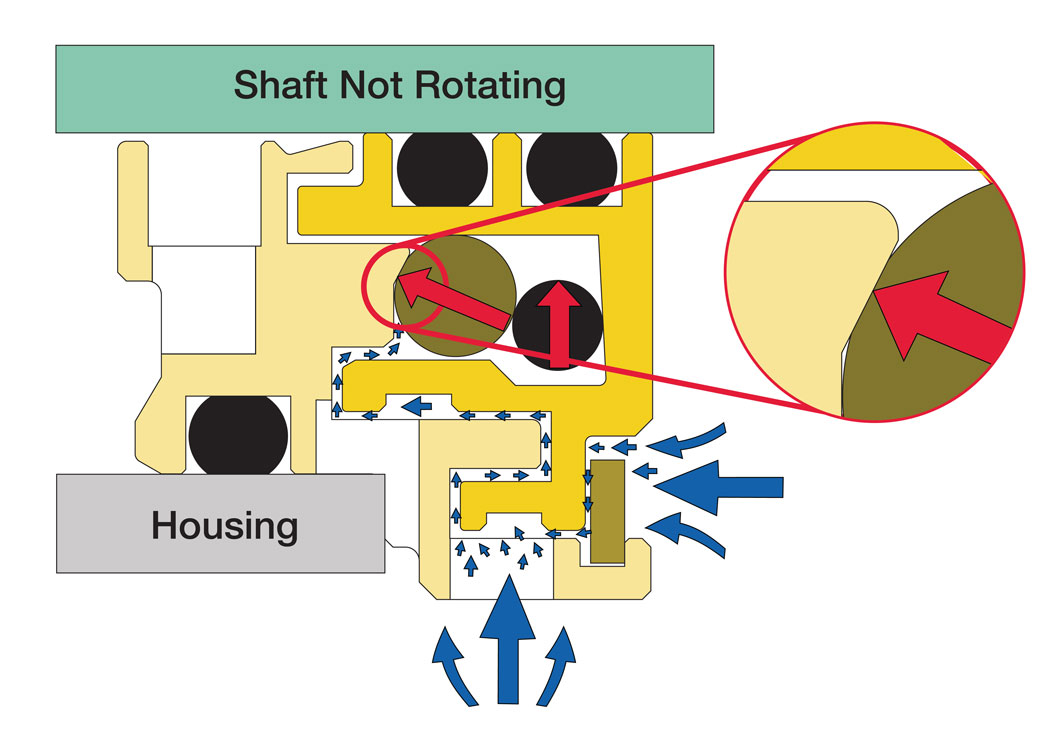 Improper lubrication accounts for about a third of bearing failures. The rolling elements of a bearing operate at their optimum temperature when using the minimum amount of lubrication. Operators must balance between over- and under-lubrication.

Adequate lubrication keeps bearings running at the optimum temperature and prevents overheating—another common cause of failure. Too much heat discolors bearing rings, balls and cages, turning them colors ranging from blue to brown. Unless the bearing is made of special alloys, temperatures higher than 200 degrees Celsius can anneal the ring and ball materials.

Excessive speed, insufficient heat dissipation and cooling, and lubricant failures can all lead to overheating. Even slightly elevated temperatures can cause oil or grease to degrade or bleed. Under even higher temperatures, oxidation forms carbon, which may clog the bearing. Modern labyrinth bearing protectors guard against contamination ingress and lubricant egress.

Modern labyrinth bearing protectors can prevent both contamination and lubricant loss. They can be used to increase equipment reliability in pumps, electric motors, pillow blocks, steam turbines and gearboxes. Operators in oil, gas and petrochemical facilities should actively consider this technology, as extreme conditions make seamless production a priority.

Chris Rehmann is the business development manager for AESSEAL in Knoxville, Tennessee, USA. He earned his engineering degree from the University of Notre Dame and worked for 15 years in various management positions with an oilfield engineering services company in Alaska, Egypt, Indonesia, Australia and Saudi Arabia before coming to AESSEAL in 2002.