Manufacturing Industry Output to Decline in 2023 Before Rising Again, Per Report

LONDON – New research from Interact Analysis projects that total manufacturing industry output will grow by 4% in 2022, then decline by $0.2 trillion in 2023, before rising again in 2024 and 2025.

The new research profiles Russia and Ukraine to ascertain stress points for MIO regions. Despite a GDP of over $1.7 trillion, Russia is considered an ‘emerging economy’ due to its small manufacturing base. However, since the largest companies in Russia are energy suppliers, the country is considered an ‘energy superpower’.

Escalating fuel prices, which will impact Europe far more severely than the USA, are an obvious fallout from the conflict. Ukraine on the other hand had a GDP of just over $155 billion in 2020 according to the IMF, of which just over 30% was industrial production. 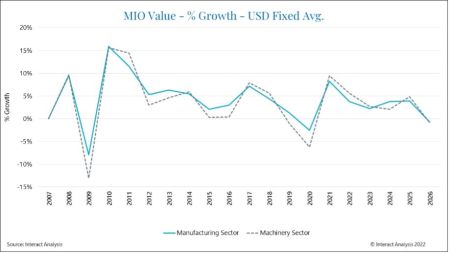 Ukraine produces 70% of the world’s Neon – a key input in semiconductor production – and half of Ukrainian Neon is from Odessa and Mariupol. Since both these cities are key Russian targets, we expect one fallout of the conflict to be severe increases in the price of Neon.

This will be a further big problem for the already beleaguered chip industry, which will turn to cheaper suppliers in China for relief.

The Shanghai lockdowns have also had an undoubtable impact on the manufacturing industry, particularly because the city hosts a port that handles over 25% of all Chinese freight traffic. Shanghai is primarily a finance center, however if the Chinese government were to implement similar measures in one of their major manufacturing hubs, it could spell disaster for the global economy, since China accounts for 44.4% of total global production output.

Adrian Lloyd, CEO at Interact Analysis says, “Automotive is particularly worthy of comment at the moment. The sector was already facing severe pressures following the pandemic, and the Ukraine conflict has made matters far worse for the industry.

One of these problems is the new pressures on semiconductors, which already hit the automotive sector hard. Another is that Russia provides the majority of the world’s palladium which is used to produce catalytic converters and is now inaccessible. And yet another problem is that Ukraine is a key manufacturer of components for Western Europe’s automotive industry, particularly wire harnesses, supplies of which are now intermittent.

In a fast-moving sector with complex correlations, it is critical to understand the state of the market now, where it was, and where it will be. This report quantifies the total value of manufacturing production with deep granularity – for over 35 industries, across 44 countries, and presenting 15 years of historical data – for a complete business cycle, pre-recession to the present day. We’ve carefully organised the country data around a common taxonomy to provide easy-to-interrogate, like-for-like comparisons. Credible five-year forecasts round out the view.

With over 200 years of combined experience, Interact Analysis is the market intelligence authority for global supply chain automation. Our research covers the entire automation value chain – from the technology used to automate factory production, through inventory storage and distribution channels, to the transportation of the finished goods. The world’s leading companies trust us to surface robust insights and opportunities for technology-driven growth. To learn more, visit: www.InteractAnalysis.com