Back to Basics: Mechanical Seals

First in a Series on how mechanical seals work

Mechanical seals touch nearly every aspect of industrialized society. Wherever a rotating shaft moves fluid, mechanical seals play a key role in sealing process fluids in, keeping contaminants out, or both.

A few basic components and principles in mechanical seal design contribute to a working seal at the interface of the rotating shaft and stationary pump/mixer/seal-chamber housing. Mechanical seals are usually end-face seals or rotating-face seals, but in some designs they can be circumferential or even a hybrid of lip-type seals. In either case, the following components are common to all mechanical seals:

The more common end- or rotating-face mechanical seal designs feature mating faces as the primary sealing elements. Rings of ceramic, carbide, carbon or composites of these materials are lapped flat in the range of less than 1 micron on an axial end face. These lapped faces run against each other, one rotating with the shaft and the other stationary with the equipment housing.

In a lip-seal-type mechanical seal, a thin film of sealed fluid also lubricates the sealing interface. Rather than two flat rings, the sealing interface is a polymer material deflected against a hard material. This material could be a hardened, coated or plated metal, ceramic, or carbide face or sleeve. One of these elements rotates with the shaft while the other is stationary with the equipment housing. 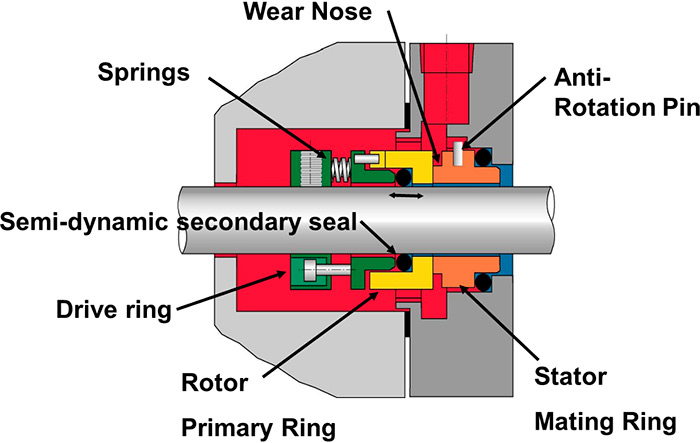 Leakage is a function of the mathematical cube of the film thickness, so to minimize leakage, the gap at the sealing interface must be kept at a functional minimum. Closing forces are used to optimize this design parameter throughout the operating range of the mechanical seal.

The sealing elements must be secured to the rotating shaft and stationary housing of the equipment being sealed. O-rings, gaskets and other elastomer seals stop leakage at these interfaces.

A lip-type mechanical seal may only require static secondary seals because the deflection of the lip-type seal accommodates equipment operating motion. All effective end- or rotary-face mechanical seals require at least one dynamic secondary seal. This is because the mating faces of the sealing interface are rigid materials that cannot comply with any equipment shaft/housing misalignments, thermal growth and shaft end-play. The dynamic secondary seal will accommodate the relative motion between at least one of the seal faces and the component to which it is mounted.

Mechanical seals are used with many process fluids. Each fluid has different lubrication qualities, but a thin, lubricating film at the sealing interface is always needed. A film that is too thick will increase leakage and may allow particulate between the faces, which will increase wear from abrasion. A film that is too thin will generate heat and cause materials to degrade. Keeping the sealing interface cool and clean will promote longer seal life.

Primary seal material selection can influence seal life as well. Chemical or process compatibility is just one consideration. Harder materials are more resistant to abrasive processes, but if both sealing elements are hard materials, the wear characteristics may be less desirable in a nonabrasive application.

Using one sealing element made of a softer material and/or one that contains lubricating components such as graphite decreases friction for starting and incidental contact. The use of composite hard faces will also reduce friction by providing microscopic reservoirs of system fluid at the interface.

Note that many seal failures result from failed secondary seals that have exceeded chemical compatibility, pressure or temperature limits. Metal parts must be compatible to avoid corrosion, and springs and other hardware must hold up in service.

Process and seal environmental controls greatly contribute to a cool, clean lubricating film at the sealing interface. If the process fluid is a slurry mixture, process pressure will drive the particulate-laden fluid into the sealing interface, resulting in abrasion and accelerated wear.

Environmental controls, such as a restriction bushing and clean flush, can isolate the mechanical seal from the harsh process so the seal is mostly sealing the cleaner, cooler flush fluid. In other cases, the pump product may crystallize, abrading the sealing interface and causing premature wear. Product crystallization can be prevented by using temperature controls, quenching the atmospheric side of the sealing interface, or using a double seal with a buffer or barrier fluid.

There are many process considerations other than abrasion that might prevent a cool, clean lubricating film at the sealing interface. If the sealing fluid has a low vapor point, for example, flashing can result. Flashing occurs when the sealed fluid changes from liquid to gas at the sealing interface, expanding quickly and forcing the sealing elements apart until the pressure and temperature are relieved, only to have the sealing elements collapse back into contact. Mechanical damage to the sealing contact surfaces quickly results in seal failure. No lubricating film is established. Operators must incorporate process controls and ensure proper mechanical seal selection to prevent such upsets. There are many other process conditions that require special attention such as fluids that harden, are toxic, must be kept anaerobic, are part of food or water supply, or present another specific constraint.

Many cool water applications fail prematurely because they are vertical, with the seal installed at a high point in the system where air is trapped. Without properly venting the air out of the seal chamber area, the mechanical seal seals air, not cool water. This is a dry-running condition that generates heat and quickly degrades the materials at the sealing interface.

A common environmental control used in vertical applications is a recirculation line from the seal chamber to pump suction, but in some cases the seals run dry for too long before the fluid replaces the air in the seal chamber.

Mechanical seals are designed to handle a range of motions and conditions, but they are just one machinery component in a larger system. Understanding the basics of mechanical seals and how they may be adapted for different application requirements is critical for choosing the best seal for the job and ensuring optimal system reliability.

Next Month: Back to Basics: Compression Packing (Find other articles in this series here.)

Mechanical Seals
Look to the Micro for Improved Sustainability
The potential for energy savings and water use ratio (WUR) reduction can be identified swiftly if focus is placed on pump components such as mechanical seals.
Mechanical Seals
Carbon/Graphite for Dry Running Mechanical Seal Faces
Tips for selecting seal face materials in harsh conditions.
Mechanical Seals
Calculate the Leakage Rate of a Mechanical Seal
A liquid-lubricated seal may have no visible leakage.
Pumps
Is a Hot Mechanical Seal Temperature Always Bad?
Part one of a two part series by Lev Nelik
Mechanical Seals
Select the Right Seal & Flush Plan for Slurry or Light-Cycle Oil Pumps
Follow these tips to find cost-effective, reliable tools.