Choose the best metering technology for your applications.
by George Halfinger
Milton Roy
05/10/2018 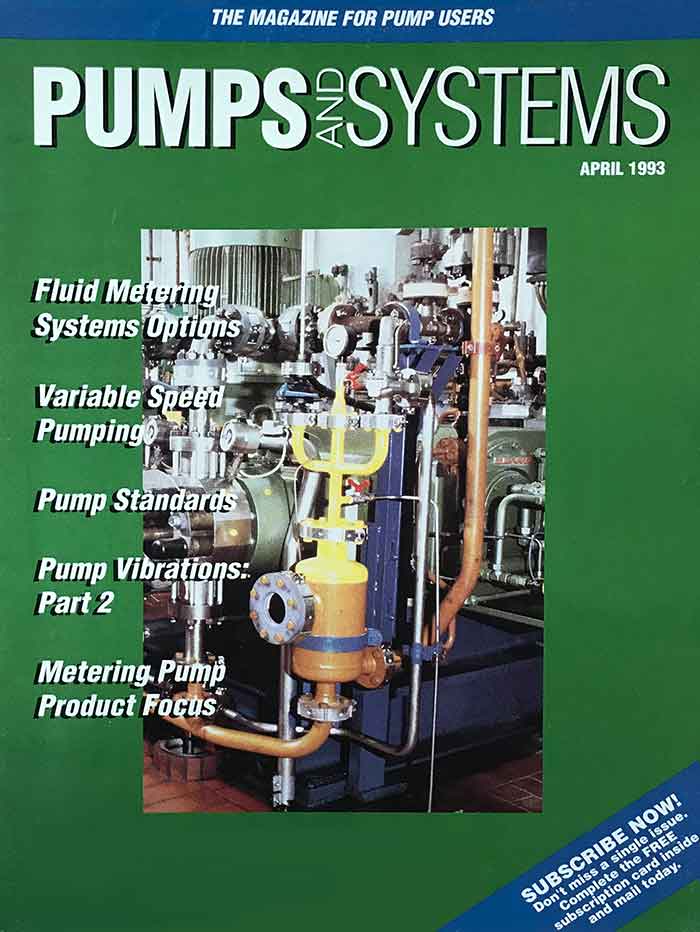 Editor’s note: Continuing our celebration of our 25th anniversary, Pumps & Systems is re-publishing the following article from 1993.

The metering pump is a positive displacement chemical dosing device with the ability to vary capacity as process conditions require. The pump is designed to provide a very precise and repeatable flow rate within a specified capacity range. Capacity can be adjusted manually or automatically via an external control signal. It features high accuracy and linearity across its entire turndown range, typically 10:1.

The most common types of pumps rely on a mechanically driven, reciprocating plunger (smaller pumps may use a solenoid drive), which either acts directly on the process fluid, as in a packed plunger design, or acts on a hydraulic fluid, which actuates a diagram.

The diaphragm, in turn, displaces the process chemical in the liquid end chamber by a fixed amount per stroke. The result is a metered dose of chemical virtually unaffected by pressure changes.
Diaphragm pumps are virtually leak free and, as environmental regulations become more stringent, are increasingly replacing packed plunger designs. Capacity is varied either by adjusting stroke length, which changes the amount of fluid pumped per stroke, or by changing stroking speed. This changes the quantity of fluid doses delivered in a given period of time. Stroke length can be varied by manual micrometer knob or by pneumatic actuator. Stroking speed is adjusted using a variable speed motor.

Stroke length can be adjusted by a variety of means, including hydraulic lost motion, mechanical lost motion and polar crank drives. The term “lost motion” refers to the fact that during a portion of the plunger stroke no fluid is displaced. The “lost” portion of the stroke is varied to obtain the desired flow. In a hydraulic lost motion pump, the plunger has a constant stroke and acts on the hydraulic fluid. Capacity is adjusted by opening a hydraulic vent port at a given point in the plunger stroke, bypassing oil from the chamber. During this period, no work is being done on the diaphragm and no process fluid is displaced. By varying the position of the bypass port in the stroke, pump capacity can be adjusted.

Mechanical lost motion pumps utilize a worm gear driven eccentric or cam to drive the plunger. A micrometer positioning screw limits the movement of the plunger as it follows the driver cam by preventing contact of the plunger and cam during a portion of the stroke. This acts to shorten the effective plunger stroke.

In a polar crank drive, a worm gear set drives a connecting rod, which then drives a crosshead at the other. A micrometer adjusting screw changes the angle of the crank assembly, altering the travel distance of the plunger. With the crank in its vertical position, no reciprocation motion is imparted to the plunger and the pump flow rate is zero. With the crank at its maximum angle, plunger stroke and pump flow is maximum.

Variable speed metering pumps adjust capacity by varying the speed of the drive motor, which in turn varies the pump stroking rate, typically at a constant stroke length.

Unfortunately, this setup fails to deliver the expected level of performance. Maximum turndown is normally 10:1, and at best 30:1, for most commercially available variable speed motors. Pumps that use worm gear reduction require a drive motor sized for the low speed operating range where the gear set operates at low efficiencies. Worm gear mechanical efficiencies are up to a third lower at 175 rpm than at 1,750 rpm (10:1 turndown). The result is increased drive cost and size. In addition, the poor lubrication at low speeds increases gear set maintenance.

Traditional metering pumps can take several minutes to achieve correct flow rates—a lag of several orders of magnitude slower than the response of the other system components.

Typical designs are accurate to only +/- 1 percent. Control systems with proper instrumentation can take advantage of much greater steady state accuracies.

George Halfinger was a product marketing engineer for Milton Roy Flow Control Division in Ivyland, Pennsylvania. He served on the Editorial Advisory Board for Pumps & Systems.