Reciprocating compressors are a vital part of the oil and gas refining process. Without safe, reliable and efficient machines, facilities will face unexpected downtime, costly repairs and lost production.

Fortunately, the development of modern monitoring software options has allowed refineries to detect dangerous faults early. They have the opportunity to correct them before they become catastrophic failures.

One monitoring software solution recently identified a liquid entrainment problem on a reciprocating compressor at an oil and gas refinery. The program detected that discharge pressure values were spiking as high as 40 bar gauge (BARG), when they were expected to stay steady at around 30 BARG. During the next two weeks, the software detected fluctuations in discharge pressure as high as 40 BARG and as low as 15 BARG. The software provider diagnosed the apparent cause as liquid entrainment within the system. 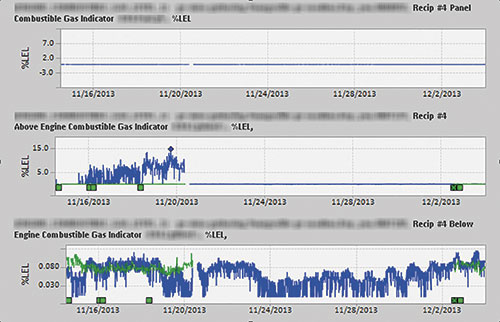 As the temperature begins to rise, the TCV will redirect the gas flow through the cooler. This ultimately causes a surging effect as pressure builds up before pushing the accumulated liquid out of the cooler.

The surging effect that this reciprocating compressor was experiencing can be detrimental to the condition of the compressor. Surging changes the loading on the piston rod and crankshaft significantly and could lead to failure of these components. This formation of liquid will also cause rapid filling of the suction knockout drum and increase the possibility of liquid entrainment in the gas to the compressor suction (if the recycle valve is open at that time).

The refinery is currently experiencing high demand on natural gas production, so they are closely monitoring this piece of equipment until the situation can be addressed during the next outage. Because the monitoring software was able to detect this problem, the refinery will now be able to address the issue before it results in costly damage and downtime.

The software provider notified the user of this fault through a high-priority email and began tracking the issue.

The user investigated the problem and found a loose fuel header. The refinery team immediately tightened the fuel header to reduce the amount of combustible gases that were leaking. 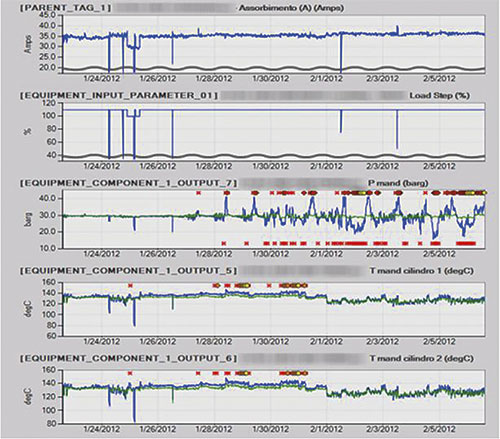 The software notification gave the user an opportunity to quickly fix a leaking fuel header. If the amount of combustibles had continued to increase, it could have caused an unplanned shutdown, resulting in production loss and excessive maintenance costs. If not corrected, the high combustibles level eventually could have caused catastrophic failure of the machine and unsafe working conditions. The monitoring solution was able to help the user verify that the above engine combustibles readings returned to a safe level after the maintenance action was performed.