A common threat to organic wastewater handling and treatment systems is the presence of hydrogen sulfide gas (H2S). This gas is toxic to humans and can be corrosive in pipes, structures, instrumentation and electrical systems. Sewage lift stations and pumping systems are particularly vulnerable as the H2S sour gas, which is produced during the decomposition of wastes, readily attacks copper used in wires, electrical contacts and cooling units used on pump panels and motor control centers (MCCs).

Enclosure cooling is vital for MCCs containing the variable frequency drives (VFDs) that are used to maintain efficient operation through regulating pump speed. Because VFDs generate a considerable amount of heat, it is often necessary to use active enclosure cooling techniques to keep VFDs operating at acceptable temperatures. The absence of effective enclosure cooling will quickly allow VFDs to overheat, shut down or fail. Such outages disrupt production, risk damage to property, affect the environment with untreated waste discharge to waterways and upset the efficiency of plant operations. 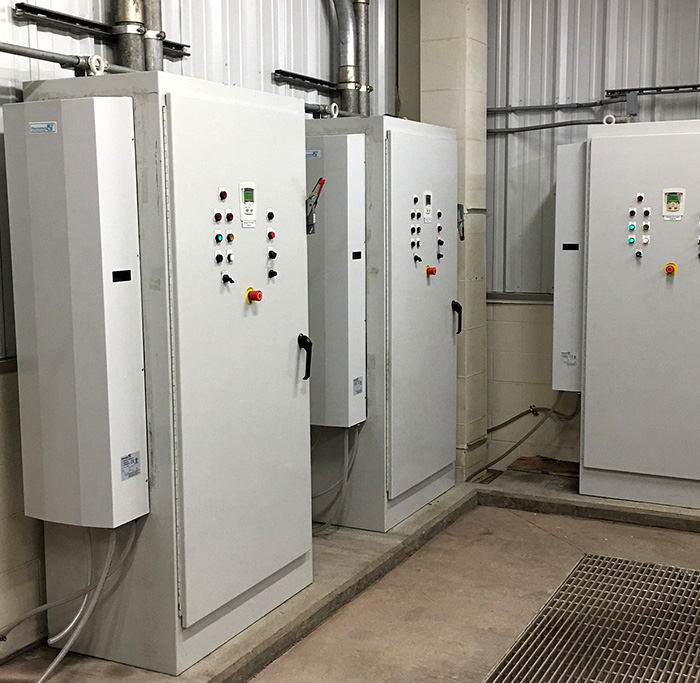 Effective electrical enclosure cooling for environments where H2S gas is present must use a closed-loop technique to prevent sour gas from being introduced into the enclosure where it could harm wiring, electrical connections, switches and other components. For many installations, it is advantageous to deploy an air or nitrogen purge system, which creates a positive pressure within the enclosure to keep undesirable ambient elements, including sour gas, outside of it. As opposed to open-loop systems that use fans to draw ambient air into and push heat out of the enclosure, a closed-loop system maintains isolation of the ambient air and permits the National Electrical Manufacturers Association (NEMA) rating of the electrical enclosure to be maintained. Examples of closed-loop cooling equipment for electrical enclosures include cooling units (also known as enclosure air conditioners) and air-to-water heat exchangers.

Cooling units are a plug-and-play solution. They simply hang on the outside of the enclosure and are connected to power already available inside the enclosure. However, these compressor-based refrigeration systems consume a fair amount of energy and require periodic maintenance. Additionally, to endure the sour gas environment, exposed copper pipes and condenser coils must be treated with a conformal coating, which is not necessarily standard. Over time, the need to clean condenser coils—which may require partial disassembly of the cabinet—can lead to scratched paint, compromised coatings and eventual corrosion.

On the other hand, air-to-water heat exchangers offer several advantages that make them the preferred method for many applications requiring closed-loop, electrical enclosure cooling. Acquisition and operating expenses are significantly lower than those of a compressor-based cooling unit, and the air-to-water heat exchanger is virtually maintenance free. Because there is no ambient air circulation within the unit, there is no risk of H2S sour gas corrosion to internal components.

Acquiring and implementing air-to-water heat exchangers poses two challenges. First, the units must be specified as the solution of choice with the MCC or pump system integrator. Second, the units must be connected to a viable source of clean water or coolant to circulate through the heat exchanger coil. Another viable implementation is to consider retrofitting cooling units with air-to-water heat exchangers. Because some units share the same enclosure cut-out, this modification can be readily accomplished without difficulty. For dissimilar cutouts, an adaptor plate may be required to reduce the size of the opening.

In addition to reduced acquisition and maintenance costs, the energy savings gained by using air-to-water heat exchangers rather than enclosure cooling units can be significant. For example, a system using an air-to-water heat exchanger that operates from closed-loop plant water that is circulated through a cooling tower will use one-tenth of the electricity to create the same cooling capacity as an enclosure cooling unit. The savings can be even more significant in a water treatment facility or pump station installation that has access to “free” water for cooling. This magnitude of energy savings is also beneficial to the environment.

The use of water cooling for keeping vital components within control panels and electrical enclosures operating within acceptable temperature limits is an economical and maintenance-free approach worthy of consideration.

Energy savings, longer service life, reduced upkeep and lower acquisition costs are some of the obvious benefits gained by using air-to-water heat exchangers for such requirements. In locations where H2S sour gas is present, such as in wastewater treatment plants and sewage lift stations, the added benefit of total isolation of components, which could become corroded in such environments, is an advantage that should not be overlooked.

Ray Limburg serves as industry group specialist for infrastructure at Pfannenberg Inc., part of the global Pfannenberg Group of companies specializing in enclosure thermal management, industrial process cooling and industrial signaling solutions. A graduate from Clarkson University, Limburg has more than 30 years of experience with sensors, instrumentation and controls for industrial applications. He is a past president of the Niagara Frontier Section of the International Society of Automation.

Pumps
Piston-Actuated Diaphragm Pumps in Mining
Learn the pros and cons of these pumps that can move fluids and slurries with high temperatures.
Pumps
5 Sessions You Should Not Miss at WEFTEC
Take a look at these technical sessions to boost your virtual experience.
Pumps
What Pump Selection Considerations Are Needed To Handle Wastewater?
The type of material in the fluid should be considered when selecting a proper pump for wastewater treatment.
Pumps
Jobsite Safety Measures To Keep In Mind
Review these submersible on-the-job precautions.
Pumps
Pump Hydraulics Fundamentals: A Student’s View
Columnist Lev Nelik discusses the basics of pump hydraulics with a reader.