Why Wye? Why Delta?

You have probably noticed that three-phase motors can have a varying number of leads exiting the junction box. The most common numbers are three, six, nine or twelve.

Note that these numbers are all multiples of three since their combinations must accommodate three incoming phases. These lead combinations are designed to accommodate single or dual voltages and Wye, Delta or Wye/Delta winding connections. The twelve-lead motor will accommodate a combination of dual-voltage and a Wye/Delta connection. We will take a detailed look at each of these a little later.

What is the purpose of these two connections, and why are motors wound as Wye, Delta or a combination of the two? The Wye/Delta combination provides a couple advantages, and we will address them in this column.
Why are single- and dual-voltage motors wound as either Wye or Delta? Why not just standardize on one or the other? Although the Wye and Delta connection diagrams are quite simple, the actual motor windings are far more complex. Often, the connection will depend on the manufacturing process.

For example, the Wye connection requires fewer turns than the Delta connection (1.732:2) to achieve the same electrical characteristics. This makes machine winding smaller motors with narrow stator slots easier. On the other hand, a portion of the leads in a dual-voltage, Delta connection can be a smaller diameter than those of a Wye. This reduces the wire cost and often simplifies manufacturing. An engineer for a major motor manufacturer recently told me, “It is a juggling act between the number of turns, number of circuits and the wire size.”

Incoming power is connected to terminals T1, T2 and T3. An advantage of this design is that wiring mistakes during installation are usually avoided because of the pre-connected windings. Proper rotation direction still must be checked.

In the U.S., the ratio of high and low voltage is 2:1 (460 volts:230 volts), but in Europe, it is √3:1 (380 volts:220 volts). This allows Europe to take advantage of the 1.732 voltage relationship between the Wye and Delta connections (discussed in Part 1) and use them for dual voltage. Since the impedance of the Wye connection is three times that of the Delta connection, high voltage is connected Wye and low voltage is connected Delta.

Another application of the six-lead motor, used in the U.S. and Europe, is a low-voltage starting technique known as Wye start/Delta run. This application uses a special starter to Wye connect the windings during starting and shift them to Delta after the motor reaches a particular speed.

The lower starting voltage reduces the starting current to about 1/3 of normal. Starting torque is also reduced substantially, so the speed at which the transition from Wye to Delta occurs will depend on the inertia of the load. Centrifugal pumps and fans can often reach full speed before switching to the Delta run mode.

Nine-Lead Motors
Nine-lead motors may be connected as Wye or Delta, but that decision is made by the manufacturers. Their purpose is to provide dual-voltage operation in applications in which the voltage ratio is 2:1. Figure 3 shows the connections for the different leads.

Note that both the Wye and Delta stator windings consist of six distinct circuits. If each of the open leads were connected together (T4 & T7, T5 & T8, and T6 & T9) the phase coils would be in series, and the applied phase voltage at T1, T2 and T3 would be 460 volts. If the phase voltage is 230 volts, the leads would have to be joined in a way that would form two parallel Wye or Delta circuits.

Since this diagram can become complex, I will present it in another manner and show the Wye connection only. Figure 4 shows a series Wye connection and is designed to accommodate 460 volts. Note that the connections are the same as mentioned above, and the terminations of T7, T8 and T9 are joined to form a Wye.

The rectangles represent winding coils, and to keep it simple, there are two per circuit. If we assume that the resistance of each circuit is 10 ohms, the total resistance in each phase is 20 ohms. In a series circuit, the resistance is the sum of the individual resistances. If the motor needed to run on 230 volts, the resistance in the circuit must be reduced if the output power were to remain the same.

Figure 5 shows the same sets of windings shown in Figure 4 but connected for 230 volts. In this example, the windings in T7, T8 and T9 are connected in parallel with T1, T2 and T3. If you look carefully at the connections on the right side, you will see that they form two parallel Wye circuits. In a parallel circuit, resistance behaves differently than it does in a series circuit. 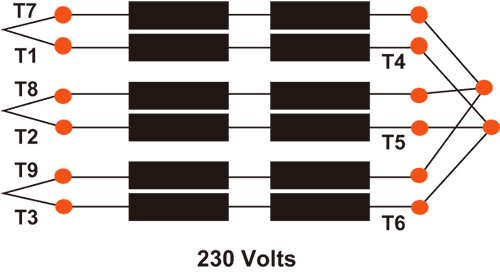 At 5 ohms, the current in the parallel circuit will be twice that of the series circuit. Therefore, the horsepower (watts) remains the same for both voltages. Delta connections provide the same series and parallel configurations.

Twelve-Lead Motors
The twelve-lead motor combines the capabilities of the six- and nine-lead designs. It provides a dual-voltage capability and the ability to select a Wye or Delta configuration. Therefore, the same motor can be designed to support both 2:1 and 1.732:1 voltage ratios. P&S

Joe Evans is responsible for customer and employee education at PumpTech, Inc., a pump and packaged system manufacturer and distributor with branches throughout the Pacific Northwest. He can be reached via his website www.PumpEd101.com. If there are topics that you would like to see discussed in future columns, drop him an email.