In Pumps & Systems January 2007, I wrote an article about cavitation and how a collapsing water vapor bubble can damage an impeller. Since then, I have received a number of requests to address Net Positive Suction Head (NPSH) and its relationship to cavitation. Here it is in a very simple, Pump Ed 101 perspective.

The process of boiling is not as simple as it may seem. We tend to think that it is all about temperature and often forget that pressure has an equal role in the process. The point at which water boils is proportional to both its temperature and the pressure acting upon its surface. As pressure decreases, so does the temperature required to initiate boiling.

The onset of cavitation also follows this rule. When water-at some ambient temperature-travels through an area of low pressure, it can undergo a change of state from liquid to vapor (boiling). As it progresses into an area of higher pressure, it will return to the liquid state (cavitation). The bubbles that form and collapse during this process are those of water vapor-not air. Although dissolved or entrained air can affect pump performance, it produces a totally different kind of bubble than the one produced by boiling.

The fact that boiling is proportional to both temperature and pressure is the reason cavitation is such a persistent problem. Simply stated, water can boil at virtually any temperature. At sea level, where atmospheric pressure is about 14.7-psi (34-ft), it takes 212-deg F. Increase that elevation to 6,000-ft and it drops to around 200-deg F because the corresponding atmospheric pressure decreases to 11.7-psi (27-ft). If we introduce a vacuum and continue to reduce pressure to about 0.2-ft, it will boil at its freezing point. Well, so what? We don't usually operate a pump in a vacuum, and even at the top of Mt. Everest we still have almost 5.2-psi (12-ft) of atmospheric pressure!

Well, it turns out that all centrifugal pumps produce a partial vacuum.  If they did not, they would be unable to pump water from a lower level. During normal operation, the area of lowest pressure occurs near the impeller vane entrances, and if the pressure in this area drops to about 1-ft, water will boil at 75-deg F! For a pump to operate cavitation free, an excess of pressure energy is required of the water entering this area. We typically refer to this requirement as NPSHR, or the net positive suction head required. Where does this pressure energy come from? It is a combination of several different forms of energy that exist, at various levels, on the suction side of the pumping system. We refer to this available pressure energy as NPSHA, or the NPSH available.

The net positive suction head available to a centrifugal pump combines the effect of atmospheric pressure, water temperature, supply elevation and the dynamics of the suction piping. The following equation illustrates this relationship. All values are in feet of water, and the sum of these components represents the total pressure available at the pump suction.

Ha is the atmospheric or absolute pressure

Hf is the friction formed in the suction piping

Hv is the velocity head at the pump's suction 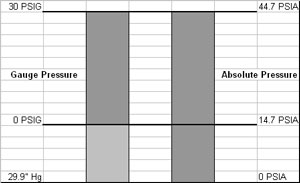 Hz takes into account the positive or negative pressure of the water source due to its elevation. If it is above the pump, Hz is a positive number and if it is below, Hz is negative. Hf is simply the friction generated due to flow in the suction piping and is always a negative number. It is a function of the pipe length and diameter plus the fittings and valves it incorporates.

Hv and Hvp may be a little less familiar to some of us. Hv, or velocity head, is the kinetic energy of a mass of water moving at some velocity V. It is equivalent to the distance that water would have to fall in order to reach that velocity. It can be calculated by determining the velocity in the suction piping from a velocity table and substituting that value for V in the equation "h = V2/2g" (where g is the universal gravitational constant, 32-ft/sec2). It is usually small-at a velocity of 7-fps, Hv is just 0.765-ft-and is often ignored if Ha and Hz are sufficiently large.

Hvp represents the pressure that is required to keep water in the liquid state at some ambient temperature and is obtained from a vapor pressure table. At 50 deg F, just 0.41-ft is required, but at 160-deg F that requirement increases to 11.2-ft. Since this pressure must be reserved for its stated purpose, Hvp is always a negative number.

At first glance, the equation for NPSHA looks pretty static, but it is actually quite dynamic. All of the variables can be in a continuous state of change. Velocity head and suction line friction vary as a function of flow. Likewise, atmospheric pressure can vary by several feet depending on weather conditions. Water supply elevation and temperature can vary seasonally. Usually the "worst case" values for each of these components are used when calculating NPSHA.

As mentioned earlier, NPSHR is the suction pressure necessary to ensure proper pump operation. It is purely a function of the pump design, and although it can be calculated, it is more accurately determined by actual testing. Why does a pump require a positive suction head? Quite simply, it is impossible to design a centrifugal pump that exhibits absolutely no pressure drop between the suction inlet and its minimum pressure point, which normally occurs at the entrance to the impeller vanes. Therefore, all pump systems must maintain a positive suction pressure that is sufficient to overcome this pressure drop. If the pressure is not sufficient, some of the water will change state (liquid to vapor) and cavitation is initiated. Like NPSHA, NPSHR is also a dynamic quantity and increases substantially with pump flow.

You would think that the NPSHR, measured by the pump manufacturer, would be the suction pressure required to prevent cavitation. That used to be the definition, but it is currently defined as the suction pressure at which a particular pump's hydraulic performance is degraded by 3 percent. This raises some concern since this degradation is actually due to cavitation, and at the 3 percent level, it has the potential to be damaging. The Hydraulic Institute's standards stipulate that each of the points on a pump manufacturer's NPSHR curve must reflect this 3 percent value. There are rumors that the term NPSHR will eventually be changed to NPSH3, which more accurately describes its true meaning.

Depending on the pump design, HI recommends an NPSHA / NPSHR margin of 1.1 to 2.5. Some pump experts recommend even more. It is a good idea to check with your pump manufacturer for its specific margin requirement as it relates to a particular pump model and its application.

Joe Evans is an expert on Net Positive Suction Head and the western regional manager for Hydromatic Engineered Waste Water Systems, a division of Pentair Water, 740 East 9th Street, Ashland, OH 44805. He can be reached at via his website at www.pumped101.com.&nbsp; If there are topics that you would like to see discussed in future columns, drop him an email.