Multiple lip seals are commonly used in centrifugal pumps and positive displacement pumps. There are many variations, but one version that has been particularly effective is a triple lip seal arrangement. The key feature is the third outboard lip seal element, which can be used for several functions.

Sealed media can be compartmentalized, providing the opportunity to apply any of the API piping plans based on the type of media being sealed. For instance, it can serve as an excluder or a secondary seal in a quench gland design for media that crystallizes or hardens with exposure to ambient temperature and pressure. Unlike a mechanical face seal, there are no rotating parts, and all internal components are not just replaceable, but replaceable on-site by in-house or field maintenance staff.

The design of a triple lip seal yields a pressure-actuated sealing element with a membrane-like body, which can be manufactured from many polymer types such as filled or virgin polytetrafluoroethylene (PTFE), polyetheretherketone (PEEK), and polyurethane. Other triple lip seals are also designed and manufactured in various elastomeric and elastomeric energized PTFE configurations (see Figures 1 through 4). In this article, we will focus our discussion on the most versatile sealing element material—filled or virgin PTFE. 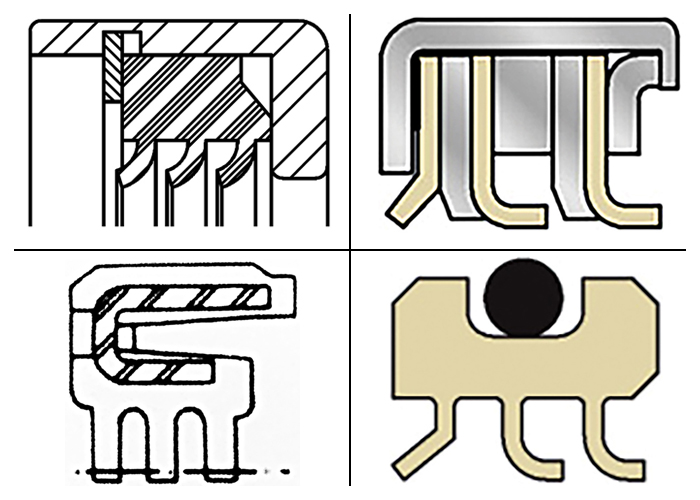 Several different materials have been used for lip seals, including various polymers and elastomer blends. PTFE has been the most dominant of the triple lip seal element materials. Properties of PTFE, most importantly low coefficient of friction, yield greater versatility than elastomers due to the need for minimal heat generation at the sealing surface. The key to PTFE is the carbon-fluorine bond. Because this bond is extremely strong, the potential for chemical attack is dramatically reduced, creating a nearly inert, tough, non-flammable, lubricious compound after polymerization. When using filled PTFE, properties can be achieved that both enhance the lubricious surface and dissipate heat from the sealing area. These properties also allow dry-running operation without generating detrimental heat at the sealing surface.

At the microscopic level, the surface finish of the lip seal has void spaces that allow gaseous and liquid particles to flow at lower actuating pressures. When operating in the proper viscosity range, fluids can only flow in one direction—from the lip seal’s back to front—due to the flexibility of the lip seal material. Flushing the sealing surfaces can take place during shutdown, or while the pump is in service.

These thermal effects may be treated for a lip seal element using Fourier’s law, the fundamental differential equation for heat transfer by conduction,

and taking into consideration the cylindrical sealing surface area, 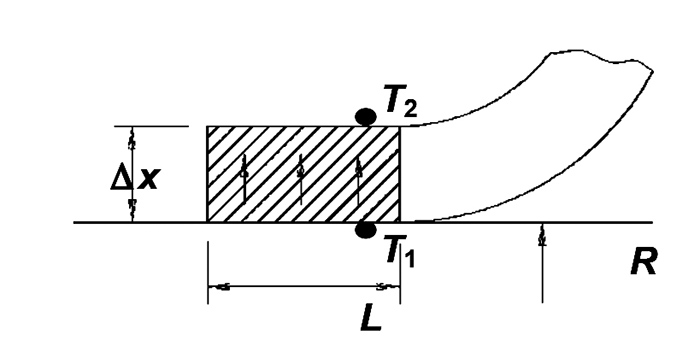 In designing the lip seal membrane, the length of the heat transfer area must be minimal. A larger area will result in an increased amount of heat generated. The larger the temperature gradient between T1 and T2, the greater the heat transfer rate will be. As the length increases, the ability to remove heat is less efficient, and in turn, the sealing surface area reaches higher temperatures.

Another key performance parameter that affects lip seal performance is the pressure velocity (PV) capability of the lip seal material. The performance of a lip seal is directly related to the heat at the sealing surface. Because wear rate increases with higher heat based on material tensile strength, it is important to understand the major factor influencing heat generation. The PV relationship best explains heat generation and wear on the seal: 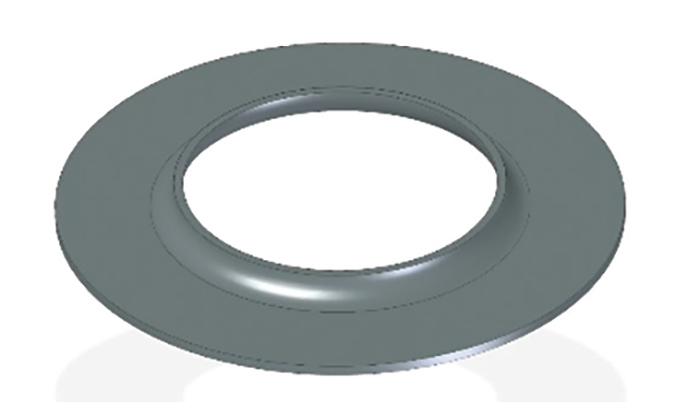 where b reflects lip seal concentricity; DP is the pressure differential across the lip seal; Pi is the pressure due to seal and sleeve interference; and Vm is the velocity at the sealing surface diameter. As pressure and velocity increase, frictional forces result in higher interfacial temperature and thus higher wear rate. Therefore, high PV capability requires the use of a lip seal material with a low coefficient of friction (see Figure 6). 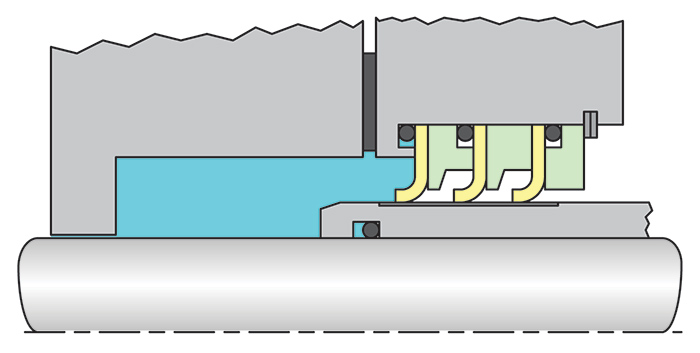 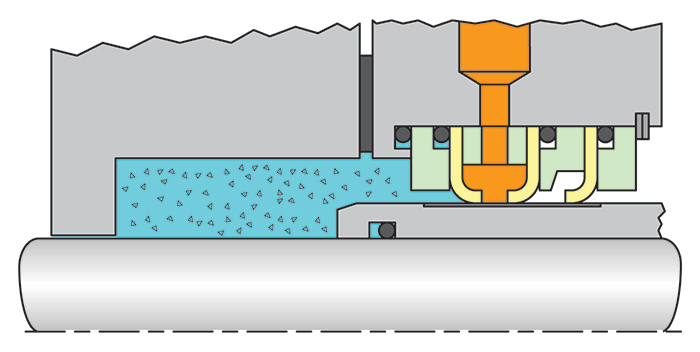 Triple lip seals can be designed in a cartridge form with gland plate, sleeve and other adaptive hardware that are used to install the seal on the equipment. The lip seal elements are in direct contact with the rotating shaft or sleeve. In conventional practice, the sealing elements are designed to face the sealed media. In this configuration, the seal chamber pressure acts as an energizer on the effective bending radius of the seal element causing it to form a circumferential interference with the mating shaft/sleeve (see Figures 7 and 8). In other applications where the pumped media must be isolated from the environment, a double seal version of the triple lip seal would be necessary (see Figure 9). Moreover, in vacuum applications the seal elements typically face away from the vacuum side so that the vacuum actuates the lip seal elements to be pulled against the circumference of the shaft or sleeve.

Other designs incorporate a thin cup or shell that is press-fitted with the lip seal elements and spacers before the shell end is rolled over to keep a tight column load on the lip seal assembly. These types of designs are typically pressed into the seal chamber bores. Other simpler designs are machined from one-piece bar stock and fitted with an O-ring on the seal outer diameter (OD) for anti-rotation and secondary sealing. These types are also pressed into the equipment seal gland bore.

As for advantages, a pre-assembled unit allows for easy installation, removal and versatility to fit a variety of pumps and other rotating equipment. The lip seal design safeguards against shaft wear and any derived cause of leakage by running on a hard-coating shaft. Triple lip seals can be adapted to different sealing situations by supplementing different sealing arrangements while using original gland and sleeve. They are not sensitive to shaft axial movement. In addition, they can accommodate a variety of media due to PTFE’s chemical compatibility and high temperature capability. This technology provides a dependable seal for the difficult application of high viscosity, slow moving and recurring start-up pumps.

Triple lip seal cartridge manufacturers usually provide repair kits to replace worn components, which can be installed on-site. Seal life can be estimated by placing a pressure gauge between the second and third sealing element. Even when the internal sealing element has failed, leakage is gradual and allows time for maintenance preparation before leakage becomes uncontrollable.

These seals are limited to relatively low pressure and speed (PV) applications, and thus tend to be used on smaller equipment. They are also restricted by the temperature limitations of the PTFE sealing element material. The seals have sensitivity to radial shaft motion and shaft-to-housing eccentricity. They cannot be used in highly abrasive applications and do not work well with light hydrocarbons or drying fluids such as alcohols.

The triple lip seal is designed to handle a wide range of applications and equipment. Cartridge seal versions are well suited for positive displacement pumps, where fluids are often highly viscous. The higher the viscosity of the media, the better the triple lip seal will perform. The inboard lip closer to the media will form a very even circumferential load under the pressure of the media around the surface of the shaft/sleeve. Also, since there are no dynamic rotating seal components, sealing performance remains consistent during dynamic operation.

Some common media suited for triple lip seals include adhesives, resins, paints, waxes, oils/greases, latex, asphalt and low-abrasive slurries. Some viscous food products include syrups, molasses, sugar beets, peanut butter and chocolate. PTFE has a temperature limit of 550 F and is virtually inert to most chemicals. Its maximum pressure limit is 200 psi, and surface speed should not exceed 5,500 feet per minute (fpm). These operating limits are much higher than those of other filled or virgin materials.

Triple lip seals are viable options for sealing some of the most difficult products. Triple lip seal technology has the ability to provide many industries with optimal sealing solutions for common and unique applications. It grants users versatility and a fresh option to add to the conventional line of sealing products. Designed for positive displacement pumps, centrifugal pumps, mixers, agitators, vacuum pumps and the like, triple lip seal cartridge and unitized seals have the flexibility to fit a variety of stuffing boxes on a variety of rotating equipment. The triple lip seal incorporates the technology of a membrane-like PTFE sealing element designed for high viscosity applications and other fluids without compromising sealing capability.

Despite its versatility, the triple lip seal has its limitations and best uses. This product does not handle light hydrocarbons very well and is not suited for slurries that contain a high concentration of suspended solids. For these, and other extreme operating conditions, contact your seal supplier.

Alfred Cooper is the current director of engineering for Ergoseal, Inc., and a member of the FSA mechanical seal division. He has worked in the seal industry for more than 25 years. He holds a bachelor’s degree in mechanical engineering and a Master of Science degree in project management.