Engineers involved with any project that includes more than a cursory amount of digging must consider how to manage groundwater. Whether construction-site preparation, pipe trenching going down tens of feet or mining operations going down hundreds of feet, water from runoff or seepage must be removed from the work area and, in many cases, must be treated in some way before being discharged back to the surrounding environment. This column explores some of the challenges associated with water removal from work sites.

While dewatering systems typically are relatively simple in structure, they highlight some of the less obvious complexities associated with piping systems. Consider a site with two drainage sumps (see Figure 1).

Figure 1. System diagram of a site with two drainage sumps (Graphics courtesy of the author)

There are two pump elements (West Pump and East Pump) providing hydraulic energy to the system; two control elements (SV-W and SV-E), which are used to maintain the quality of the process; and the process elements (tanks and piping), which deliver the process—in this case, removing water from the work site to a discharge tank in an elevated location (100 feet above the site where the pumps are located).

When we model the case where one pump is operating and discharging to atmosphere above the surface of the receiving tank, we see our selected pump can move 182 gallons per minute (gpm) running at a pump efficiency of around 44 percent (see Figure 2, page 16). This operating point, however, is far away from the best efficiency point (BEP) and likely to cause significant vibration and reduced pump life.

However, if we add an elbow and a length of pipe to discharge below the surface of the receiving tank, the flow rate increases to 260 gpm and efficiency goes to more than 49 percent (see Figure 2). 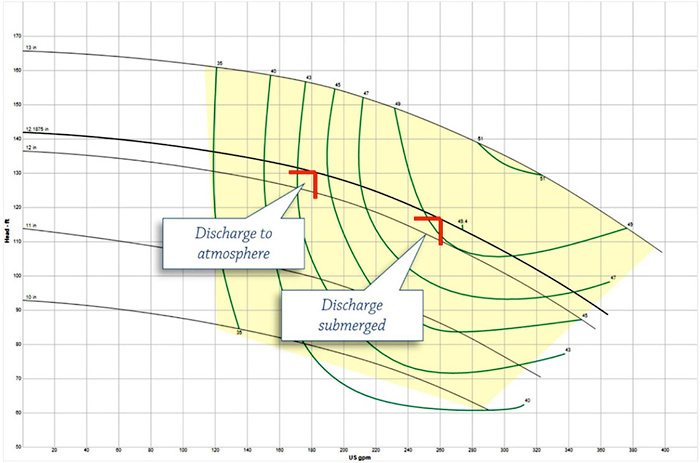 This approach yields benefits in operating costs, and, because the pump is now operating much closer to the BEP, there will be significantly less vibration and cavitation than what would have been seen with the discharge above the receiving tank.

Many dewatering operations overlook the benefit associated with the siphon effect at the discharge, and incur higher operational and maintenance costs that significantly outweigh the cost of an additional length of pipe.

Depending on the seepage rate, the dewatering pump may operate continually or may be turned off and on based on the water level in the sump. This represents another control in the system and highlights a key point: Control methods range from quite sophisticated to very simple depending on the application. In this case, it may be a simple on-off float switch, or a manual switch that is driven by the operator following a procedure to visually check and flip the switch when the sump gets to a specified level. 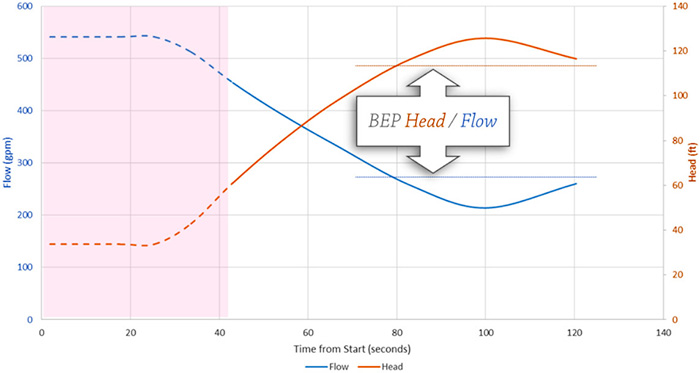 Figure 3. Pump performance during fill time without a control element

Now take a look at what happens when the pump is turned on using system simulation. First, the pump must fill up the pipe, which means initially the static head is significantly lower than when the pipe is full.

Initially, the pump is trying to run beyond runout and precise flow rates cannot be predicted. However, the pump will run well above the BEP flow rate and will experience serious vibration and cavitation as the pipe fills.

Depending on the length and diameter of the pipe, this will take about 120 seconds, but with larger pipes or greater distances this can last for several minutes and can result in greater amounts of damage and reduced pump life.

Control elements need to be employed to prevent this. Again, control elements vary in level of complexity. One viable solution could be a back-pressure regulator. Using system modeling software, we can determine that a back-pressure regulator set at 48 pounds per square inch (psi) will allow the pump to run very close to its BEP no matter how much fluid is in the pipe.

Alternatively, if the startup control method is manual when the sump is getting full, the process could include starting with valve SV-W opened a smaller amount, and after a set time manually open it to the fully charged operating condition.

This would not hold the operating point near the BEP for the entire time, but would reduce the severity of the vibration during the initial filling of the pipe. 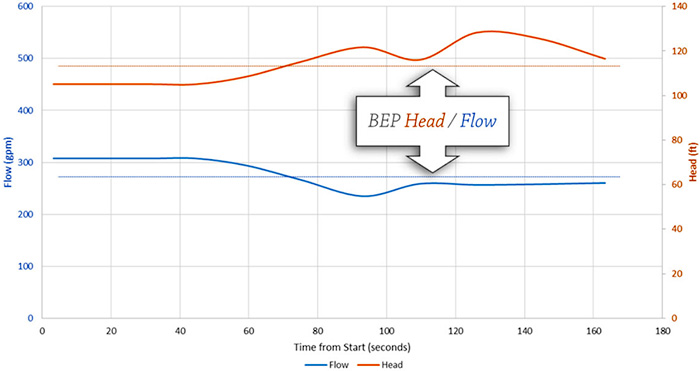 Using our system model, we can determine the best valve position and fill time by evaluating the static head on the pump over time. In this example, setting the valve at 50 percent open at startup, then opening the valve to 90 percent after 90 seconds was determined to be an optimum process involving only one adjustment and minimal operator attention.

Regardless of the control method, we can see that the pump, process and control elements all work interdependently to determine the total system behavior. Instrumentation and controls such as level indicators, float switches, regulators and manual valves are an integral part of the system, ensuring it operates within the range of acceptable conditions, preventing overflow, spillage or equipment damage.

Lastly, it is common in dewatering situations to have multiple sumps feed into a common header, so the interaction of multiple pumps is something that must be considered. In our simple model, the addition of the East Pump has only a small negative effect on the performance of the West Pump, pushing the operating point away from the BEP.

In systems with multiple sumps, wellpoints or deep wells, multiple-source elevations and pumping into common headers can have significant effects, including reversing flows and causing pump damage as various pumps are brought on- and offline.

A full system analysis looking at different scenarios will lead the engineer to a greater understanding of the interactions between the pump elements, determine the most critical areas within the process elements, and find the most efficient locations and controls to operate the system in all situations.

As discussed, even a simple dewatering system has all the elements of more complex piping systems—pump elements, process elements and control elements—as well as all the same problems large systems experience.

Taking steps to mitigate these problems, even simple steps such as extending discharge piping or adding a well-placed manual valve, can have a positive effect on uptime and operating costs.