Incorporating the latest advancements in digitizing technology, a non-contact handheld laser scanner can make reverse engineering and replacing key parts for hydroelectric facilities possible with speed and accuracy unimaginable for a previous generation.

The handheld scanner is a powerful, portable scanning device capable of capturing 3-D geometry from objects of almost any size or shape. The scanner is attached to a mechanical arm that moves around the object, freeing the user to capture data rapidly with a high degree of resolution and accuracy. As each part is inspected, the scanner generates a point cloud consisting of millions of points each with x, y and z coordinates and i, j and k vectors.

Integrated software that comes with the scanner is used to convert the point cloud to an STL polygon and an optional tripod provides complete portability in the field. Intuitive software allows real-time rendering, full model editing, polygon reduction and data output to all standard 3-D packages.

A Melrose Park, Ill., turbine parts supplier, Power Plant Services, uses a handheld scanner to reduce the time required to reverse engineer turbine blades by 60 percent. In the past, the production of a 3-D file from a customer’s turbine blade took the company 15 hours. However, that has changed. Power Plant Services engineers and manufactures high-performance alternatives for original equipment manufacturer (OEM) turbine parts and systems and supplies a wide selection of other parts and services to the power generation, pulp and paper, petroleum refining and steel industries. The company produces more than 10,000 parts per year and has performed repairs on major turbine components for more than 40 utility plants. 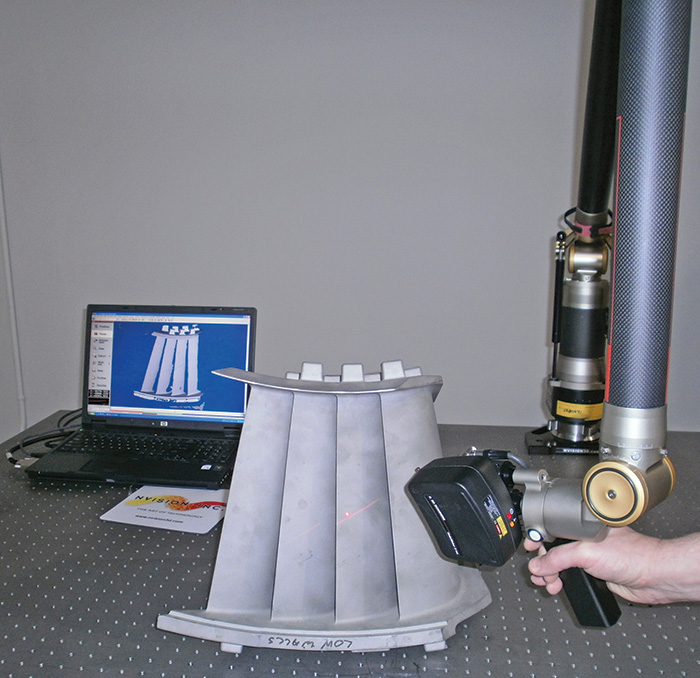 “By switching to this laser scanner, we can produce an accurate CAD file in only six hours, which makes it possible to deliver a new blade to our customer one full day faster than was possible in the past,” says Chad Fisher, project manager for Power Plant Services. “That time saving can result in significant cost savings for the company’s customers.”

Delivery time is critical because end users and operators often place their orders after the equipment has failed, which can sometimes cost thousands per day in lost revenue.

“Previously, we used a contact probe to measure part elevations point by point in different cross-sections of the airfoil and entered the measurements into solid modeling software,” Fisher says. “Then we created lofts between the elevations. We felt that laser scanning could improve this process by capturing the entire profile of the airfoil and eliminating the need for measuring elevations and lofting. We looked at several different models and selected the handheld scanner because of its portability and because the company provides a complete solution, including both hardware and software. We only have to work with a single organization for support.

“The handheld scanner substantially reduces the time required to reverse engineer airfoils and other parts. Since we began using it, we save about nine hours per part, and we are also more confident in the results because we get many more points of data than in the past.

In many cases, we are able to save our customers money by getting their turbines up and running a day earlier than was possible in the past. Another advantage is that the portability of the scanner means that we can now go to our customer’s facility to reverse engineer parts that are too big for shipment.”

Parts other than turbine blades can be reverse engineered quickly using the handheld scanner. The turbines that move the water in hydroelectric plants employ massive impellers to get the job done. A damaged impeller can mean extensive downtime for a power plant, with ensuing costs in time, money and lost production. 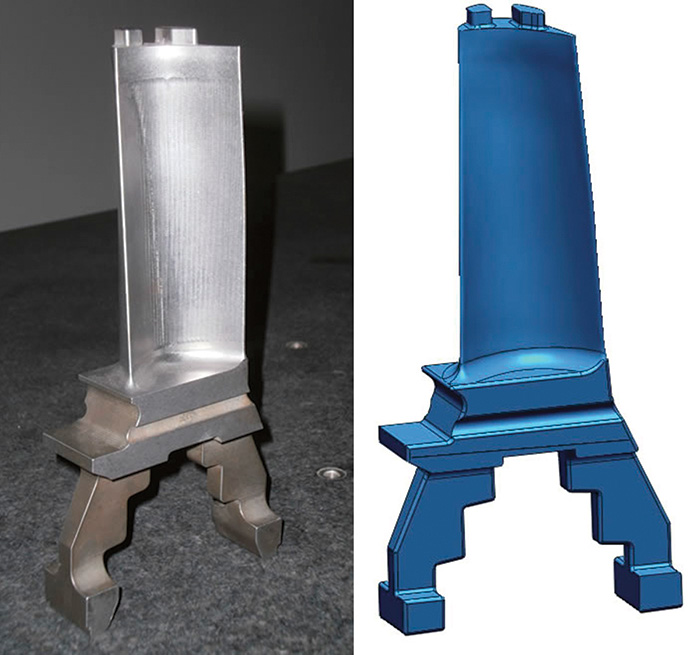 In another application, the handheld scanner engineers quickly reverse engineered a large impeller for a major hydroelectric facility.

With a refurbished impeller temporarily in use as a replacement, the facility’s management contacted the handheld laser scanner manufacturer to produce a computer model of the impeller. Two days after that initial contact, an engineer was onsite at the plant to scan the impeller using the handheld scanner.

The handheld laser scanner worked for this project because its ability to move freely around the part made it possible to reverse engineer components of virtually any size and shape. In this case, the spacing of the impeller blades was large enough for the laser scanning head to fit through.

Scanning took eight hours and included data from three locations situated throughout the part, with data being indexed into the same coordinate system using geometric features.

After the data was collected and processed into a stereolithography (STL) mesh, a model was created in two days.

The facility received the completed CAD model of the impeller just six working days after its initial call to the manufacturer. The computer model was then used to manufacture an exact duplicate of the original impeller. In the end, only a relatively short shutdown was necessary to accommodate the scanning and reproduction of the impeller.

By using laser scanning to reverse engineer the impeller, the facility was able to avoid a lengthy and costly shutdown.

As a side benefit of the scanning, the engineers found that the impeller being used as a replacement was greatly out of balance with no easy way of manually checking the part to see where the problem lies. Fortunately, using the scanner’s inspection software, the engineers were able to rotate and compare the data virtually, giving them a precise indication of problem areas.

From these and other case studies, it is clear that non-contact, handheld laser scanners are becoming an essential tool for hydroelectric engineers.

To save time and money in any industry, these devices can help in developing parts and in determining where balance and other problems exist in spaces and locations where traditional scanners cannot be used.

Steve Kersen is the VP of sales and marketing for NVision, Inc (Coppell, Texas). He was one of the founders of the company in 1990 and has helped guide NVision to its current position in non-contact optical measurement technology and services.

Among his other achievements, Kersen has overseen the company’s expansion to include sales of non-contact laser systems, non-contact CMMs, reverse engineering and inspection services, and a consulting division.

Kersen holds a chemical engineering degree from the University of Texas and worked for ExxonMobil for 6 years prior to starting NVision. He can be reached at skersen@nvision3d.com