Part One of this series explained how the clamping force on a bolted flange connection (BFC) can play a major role in preventing gasket blowout. In fact, more often than not, it is the single most important factor. Part Two discusses the two most important strategies to use for applying the correct clamping force. End users control these strategies. One involves developing a bolt load solution that optimizes the inherent strength of the BFC components. The other is following an installation procedure that ensures that the specified bolt load is reached and evenly distributed around the face of the gasket.

A BFC is composed of three primary components: the gasket, fasteners (bolts/studs, nuts and washers) and flanges. Each component has a role in developing and maintaining the clamping force. Together, they work as a system to produce a successful seal. The state of stress of one component depends on and affects the state of stress of the others. A sealing solution that only considers one or two will miss the opportunity to maximize the clamping force and, therefore, the gasket seal’s reliability. Likewise, developing a sealing solution that does not consider the interaction and strength of all components can cause blowout.

The gasket provides the properties that create the seal against the face of the flanges. For the gasket to seal under installed conditions, a minimum stress value is necessary. This value should include the relaxation that will occur during the gasket’s installed life. To prevent damage, it also has a maximum stress value that should not be exceeded, its crush strength, which can be obtained from the gasket manufacturer. When a gasket’s crush strength is exceeded, the properties that provide the seal break down. An optimized solution targets a stress level that is as high as possible above its minimum value but a comfortably safe margin below its maximum value and a value that may cause a problem to the bolts or flanges.

The bolts provide the mechanical leverage that allows a high and controlled value of force to be transmitted to the gasket. The force from tightening the bolts must be at least high enough to satisfy the gasket’s sealing requirements but not so high that it creates a problem with the gasket (exceeded crush strength) or the flange (exceeded strength limit or cause excessive rotation).

Additionally, the bolt has its own limit that must not be exceeded during tightening or under the internal pressure load. The targeted torque must not exceed this limit, and the specification of the bolts must be known. Two bolts of the same size and material can have significantly different limits. For instance, the yield strength at ambient temperature of an American Society for Testing and Materials A 193 Grade B8 Class 1 and Class 2 bolt is 30 ksi and 100 ksi, respectively, for diameters ¾ inch and less. Attempting to tighten a Class 1 bolt to a Class 2 bolt’s level can cause damage that results in a loss of clamping force.

As mentioned in Part One of this series, the amount of force required to overcome any incidental loads that would resist the torque load from compressing the gasket must be known. Table 1 in Part One provided a list these of items.

The primary function of the flanges is to transmit the force from the bolts to the gasket and allow for separating the connected pressure equipment for future maintenance. They must be strong enough to accept this force without damage and rigid enough to ensure that they do not excessively rotate across the face of the gasket. In many ways, the flanges are the most important component of a BFC and are often not evaluated in a clamping solution. 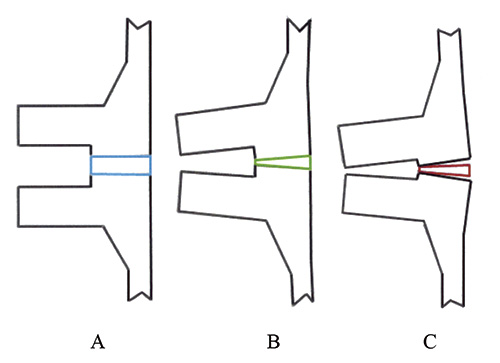 Specifying bolt loads without understanding the implications to the flanges can result in blowout or, at the very least, process leakage. Without considering the flanges, such problems are often inaccurately diagnosed as a gasket problem. To help understand the possible effect of excessive rotation, Figure 1 (A, B and C) shows the bending that can occur when the bolt load exceeds the capability of the flanges to resist the associated rotation. See the descriptions below:

As a flange rotates, the compressive gasket stress increases from the inner to the outer diameter. When excessive, the gasket stress’ value can become high enough to cause damage because the bolt load is transferred across a much smaller gasket area. Often, more leaks are caused from over-tightening than under-tightening, especially from specifying fastener loads that fail to account for a flange pair’s limitations.

To ensure an optimum level of clamping these steps should be followed:

When the optimum load strategy is complete, the maximum permissible bolt load that will reliably seal the gasket without damaging any of the BFC components has been determined. Unfortunately, the reliability of this optimization is significantly lessened or even eliminated unless the identified load is accurately transferred to the flanges. This is the assurance that the second strategy provides the clamping load, which is the development and following of a validated tightening procedure.

Engineering has determined what load should be prescribed for the flanges. The actualization of this work can only come to fruition when this load is imparted to the bolts. This is not an easy task. Elastic interaction between bolts during the tightening process is a formidable obstacle to overcome to ensure that the gasket stress reaches its targeted value and is evenly distributed across the sealing face of the gasket. Following a procedure that ensures that the targeted load is reached requires skillful and trained mechanics. Other factors also affect the process, such as improperly installed piping that can create forces that prevent the intended bolting load from reaching the gasket.

Elastic interaction is the effect that the tightening of a bolt has on the other bolts of a flange that have already been tightened. It occurs because the first tightening pass on a bolt will relax as subsequent passes are made. This is primarily caused by gasket relaxation and continues until a sufficient number of tightening passes have been made. The sequence is important. Following a crisscross or star pattern helps more evenly apply the clamping load to the flange and, therefore, more evenly distribute the load to the gasket. The importance of ensuring that the gasket stress evenly reaches its targeted value cannot be over emphasized. The more closely the tightening procedure is followed, the more reliable the joint will seal. However, what procedure should be used?

Several sources provide good tightening guidance, including bolting and gasketing handbooks and many websites. The American Society of Mechanical Engineers PCC-1-2013 Standard, Guidance for Pressure Boundary Bolted Flange Joint Assembly provides several tightening patterns and includes guidance on how to group fasteners during the tightening process in cases with large numbers of fasteners. One of the best resources is the gasket manufacturers, which will often have more and better experience on the best way to seal their gaskets. After the fasteners have been correctly numbered and all components are confirmed to be in good condition and properly prepared, this procedure (abbreviated for publication) should be followed using a calibrated torque wrench:

This procedure is critical to ensure that the gasket is tightened evenly and to the specified value. The results are significantly more reliable than tightening by feel or experience. The benefits include blowout protection and more reliably sealed BFC.

Focus on clamping force is central in importance to guard against gasket blowout. Part One explained the general balance of forces involved in protecting against gasket blowout. This “Sealing Sense” discussed strategies for identifying a maximum permissible bolt load that flanges should be exposed to and ensuring that the flanges actually realize this load. Use of this guidance often requires increased effort and expertise, but when it is followed, it can provide confidence that blowout is not imminent and that a reliable gasket seal will result.