Proper pump selection is more important than ever, with drastic consequences for maintenance, reliability and efficiency. The selection process remains difficult for average users, and even contracting the work to a reputable engineering firm does not guarantee success. In this column, we will cover centrifugal pump design, common pitfalls in the selection process and consequences of improper selection.

Centrifugal pump technology has been around for centuries without any revolutionary changes. There are new alloys and coatings to build the casings and impellers from, and efficiencies have increased. Bur the basic design remains largely unchanged. Unlike other 21st century technologies, a centrifugal pump from 100 years ago is nearly identical to modern designs. If anything, the older designs are more robust, with the current competitive market forcing manufacturers to cut costs by eliminating excess material.

A pump from a reputable manufacturer may perform poorly in a system regardless of the pump’s specific quality. A pump made from titanium and designed for a 30-year life cycle, while expensive, could perform inadequately for another industrial application. Therefore, it is crucial to fit the right pump to the right application. To understand why failure can occur, let’s dig into the basic operating points of centrifugal pumps.

As the pump shaft spins, it turns the impeller inside the casing, which adds energy into the process fluid. This allows the impeller to act as a cantilever with a wear ring, seals and bearings that keep everything in place and fluid from leaking out. The spinning impeller changes the incoming fluid’s direction, which can cause intense radial loads on the pump. The bearings not only reduce rolling friction, but also support the pump shaft and absorb these radial loads. This may be seen in a detailed view of a centrifugal pump in Image 1. 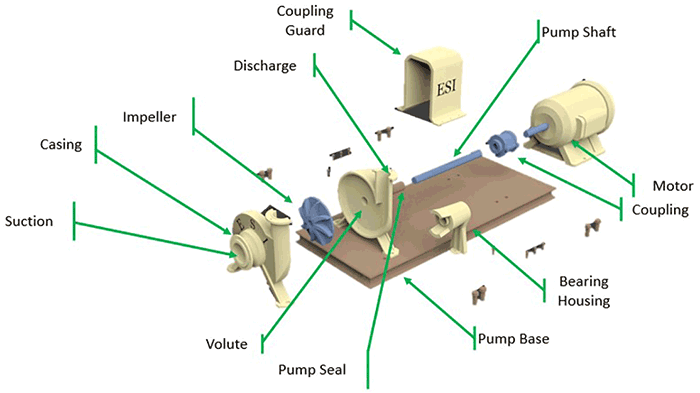 Image 1. Detailed view of a centrifugal pump (Images courtesy of the author)

All pumps have a design point where the efficiency is maximized, called the best efficiency point (BEP). This is where the pump runs the smoothest and radial forces are minimized. The further away from the BEP, the higher the radial loads on the pump. The pump will generally have a critical speed around 25 percent over the BEP where its natural frequency is reached and excessive vibration may occur. The pump will essentially shake itself apart, first going through the wear ring, then the seals and finally the bearings. This is usually easy to spot since the pump will vibrate and may begin leaking fluid far before any scheduled maintenance.

Pump curves demonstrate the strong relationship between pump life, pump reliability and where the pump operates on its curve.

The performance of individual pumps is a combination of the pump design and the operating conditions. The pump’s performance data is provided to the user in the form of pump curves, with the primary function to communicate or define the relationship between the flow rate and total head for a specific pump. They are provided by the manufacturer and show the operating characteristics of a specific pump type, size and speed based on results of standardized tests and test conditions. A healthy pump maintains the defined relationship between the head and flow at all times.

The pump curve is required for:

For accuracy, it is critical to have a pump curve for every pump.

Image 2 shows a stylized pump curve in black with efficiency in green. To operate at the BEP, the system must either control the pressure at the outlet of the pump or the flow through the system to keep the pump operating point (indicated by the red arrow). 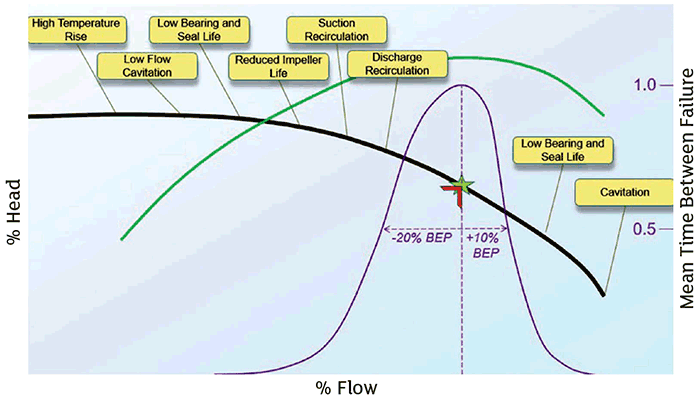 If we overlay the expected life of the pump as a function of where the pump is operating, we get a “Barringer Curve,” which shows the mean time between failure (MTBF) as a function of BEP flow rate. This curve was created by Barringer & Associates in a study of seal failures in centrifugal pumps.

Using Image 2, the closer the pump is operated to its BEP, the greater the MTBF. As the operating flow rate of the pump moves farther to the left or right of the BEP, the failures occur more frequently.

MTBF cuts in half when the pump is running 20 percent below the BEP or 10 percent above it as shown. When operated to the left of the BEP, problems like high temperature rise, low flow cavitation, bearing problems, reduced impeller life, suction and discharge recirculation lead to seal failure and pump downtime. To the right of the BEP, bearing and seal life are effected, and cavitation problems occur.

The key takeaways are understanding how the system impacts the pump on its curve and the reliability and life of the pump increases when the pump operates near the BEP.

Cavitation is a major concern; it can demolish pumps very quickly. If there is a low intake pressure or the pump is operating at the far end of its curve, it pulls the fluid through so rapidly that the fluid pressure drops below its vapor pressure and can cause it to boil.

For example, at sea level water boils at 212 degrees Fahrenheit (F). At the top of Mount Everest, where the pressure is much lower, water boils at 160 F. In a pump, the pressure may drop low enough that water “boils” at 60 F, or whatever the ambient temperature may be.

It may seem difficult for air to strip away steel in a pump. In fact, it is the millions of vapor bubble creations and implosions that can do the damage. This effect is clear once the pump is in operation and can sound like gravel being pumped no matter the base fluid. For this reason, spending extra money on an oversized pump may cost more money in maintenance and repairs.

Because the individual piping process is generally unknown, engineers tend to oversize pumps. They do not know exactly how a contractor will route pipes and thus include a safety factor in the calculations. This safety factor generally goes on top of the worst-case design scenario.

The engineering firms are incentivized by the fact that they do not want to be blamed for an undersized pump if it is not able to meet the process requirements. Imagine the outrage and damage to a firm’s reputation if their clients did not get adequate water pressure from a shower, cooling from the heating, ventilation and air conditioning (HVAC) or flow from the sewers.

A general rule of thumb for safety factors is 10 percent. The junior engineer will generally assume a certain amount of required energy based on the expected piping, process and control elements, and then add 10 percent to this number.

A senior engineer may review the work and add an additional 10 percent as well. Things continue to get more complicated as end users may have unrealistic expectations for production capacity given the desired high numbers, or may want the infrastructure in place for a potential expansion years down the road. When the pump is finally ordered, the manufacturer’s representative will help select a pump that is large enough to handle these operations and then some.

These safety factors end up compounding on each other leaving the actual process something different than what was required.

The end user may be saddled with an inefficient pump and the possibility of hundreds of thousands of dollars in additional energy and maintenance. This is why using software to model expected flow conditions at various operating points is highly recommended.

According to the Hydraulic Institute’s “Pumping System Optimization,” an evaluation of 1,690 pumps at 20 process plants discovered some alarming results. They found the average pumping efficiency to be below 40 percent. On top of that, more than 10 percent of pumps from that study were less than 10 percent efficient.

A major cause was found to be improper pump selection. The general rule is that a pump and motor combo will cost about $1 per day, per horsepower of the motor. While energy costs vary by location, this is a good starting point to begin understanding what potential costs you are facing.

For larger horsepower pumps running inefficiently, the wasted capital is staggering. Energy costs alone are seldom cause for change, much less transformation of an industry.

Once the pumps are installed and running, the energy costs are out of sight and out of mind. There are many other costs in industrial facilities, and discovering the true cost of the pump
is hard when it is buried in an industrial energy bill alongside the high costs of heating, cooling and running the equipment.

There are additional benefits from an optimized system than just energy savings—process quality and quantity for starters. In many instances, systems have been left alone, because they work and managers do not want to endanger the process.

This works if you are satisfied with the status quo. However, slight changes to the system may result in sizable increases in production throughout. When considered over many years, these changes produce dramatic results.

System reliability and reduced maintenance generate some of the biggest savings when the pumping system is running correctly.

From the Barringer curve, we can see that we must operate close to the pump’s BEP in order to maximize our efficiency and mean time between failure of the pump.

Reputable pump manufacturers design their pumps to operate for 20 or more years of operation if done correctly, yet end users are often satisfied with just five years. Costs are also easier to track in parts and labor. The savings opportunity from better maintenance and reliability alone warrants a second look at your pumps and systems.

Dominik Fry, P.E., is Engineered Software’s business development engineer and has nearly a decade of experience in the energy industry. Fry earned a Bachelor of Science at Montana State University and his professional engineering license in mechanical engineering from the state of Colorado.