In May 2010, an electric motor repair service provider in Little Rock, Ark., began a condition monitoring program for a new customer. The customer opted for quarterly data collection. The following is a brief case history of a component failure in a nominal 1,800 rpm pump train.

Figure 1 shows a fast Fourier transformation (FFT) analysis taken in May 2010 (the scale is high to accommodate and compare peaks in subsequent measurements), along with a trend of the band of energy around 1 times (×) turning speed, a trend of the band encompassing 2 and 3 × turning speed and another FFT taken in September 2010. Figure 1 is in the axial orientation. 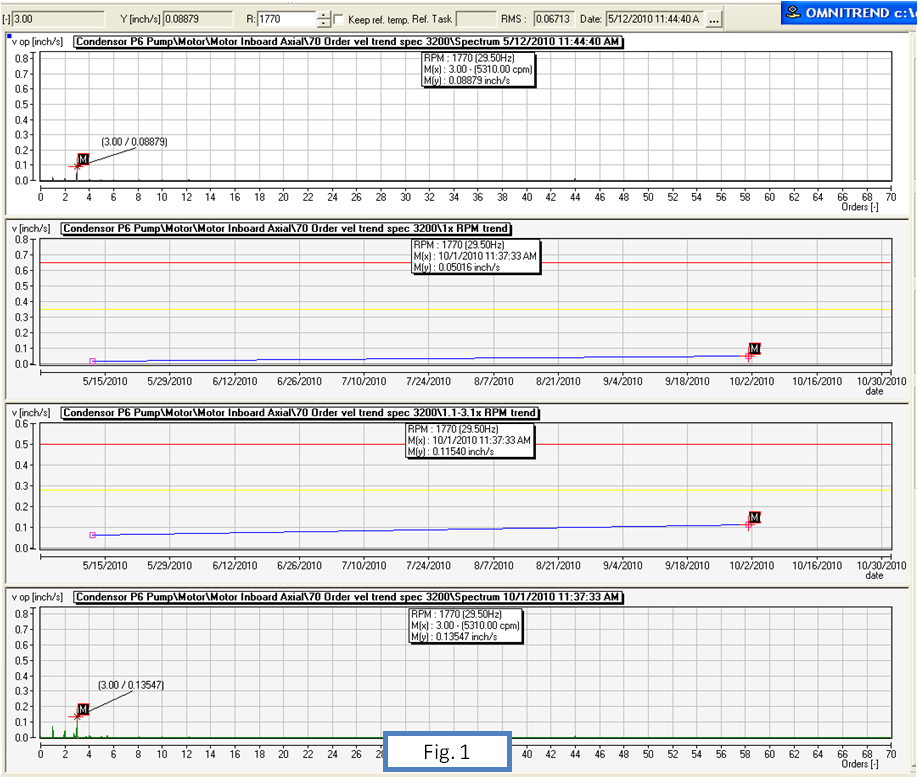 The energy content around 1× turning speed more than triples, while the energy around 2× and 3× turning speed more than doubles from May to September. Notice from the spectrum that 3× is the dominant peak. A trend with only two points of data can hardly be called a trend. In fact, no functional validity could be attributed to the trend at this point. A percent-of-increase alarm was tripped (not shown). Therefore, an investigation would be ordered.

Study of this axial FFT revealed that 3× turning speed is the dominant peak and 2× turning speed is also prominent. This hinted that something was less than optimal on this pump train. In fact, the dominating 3× component indicated, with a high probability, stress on the coupling that had three contact points in the interface.

The horizontal FFT, however, was dominated by the 1× peak, with the 2× also being prominent (see Figure 2). Again, with only two measurements, all that could be deduced from a comparison of the first two horizontal readings was that, if the amplitude of the peaks of interest were to continue to grow proportionally until the next monitoring date, it would show real, damaging results. However, since it is not uncommon in many machines for such vibrations to jump up and down from day to day, it is hard to cry wolf with only two data points separated by such an interval…so much for trending comparisons. 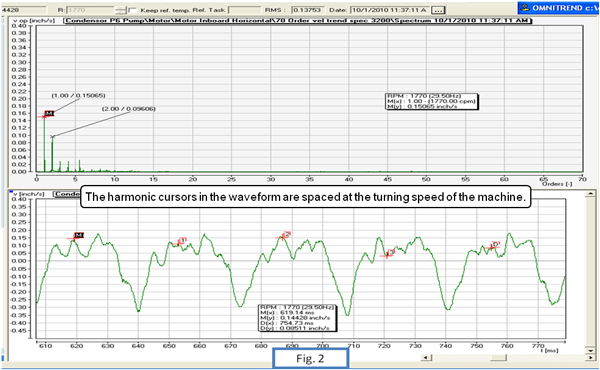 To make matters more difficult, the time to take phase readings is not budgeted into many programs (including this one). The most likely cause of the apparent problem could not be verified with the most telling data, because at this point, especially after considering the velocity waveform in Figure 2 from the motor inboard horizontal FFT, this pump train appeared to be misaligned.

The time waveform, which was taken as part of the horizontal FFT in the second round of data collection, showed severe constriction, which often indicates misalignment. This coupled with the increase in amplitude, required action.

The customer was notified that the alignment needed to be checked for this pump, and it needed to be watched during the interval before the next round of data collection. If a precision laser alignment had been performed at this point, this pump train likely would have operated trouble free for many years.

No work was performed on the pump train, and by January 2011, there could be no doubt that this pump had problems. The high 3× turning speed vibration shown in Figure 3 clearly indicated a severe coupling problem. Somewhere along the timeline, this scenario would (or already had) move from a defect elimination opportunity to a necessary repair.

By April 2011, failure seemed imminent, with the extremely high 3× turning speed vibration delivering almost 320,000 blows per hour on the drive train of the pump. Still no action was taken, as today’s lean operating businesses are often spread too thin to react in time, even with ample warning. This is a vicious cycle that can only be broken by precision maintenance practices and condition monitoring supported by defect elimination. These three disciplines, practiced together, can bring end users’ equipment population under control.

Amazingly, this pump was still running in July 2011, but it took no special equipment to sense that it was on the path to failure (see Figure 4). The direst warning of impending failure was given, and the customer now hired a repair service provider. 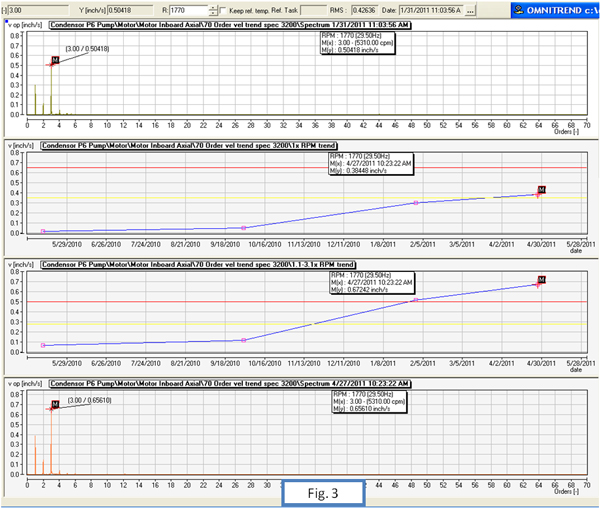 Amazingly, this pump was still running in July 2011, but it took no special equipment to sense that it was on the path to failure (see Figure 4). The direst warning of impending failure was given, and the customer now hired a repair service provider. 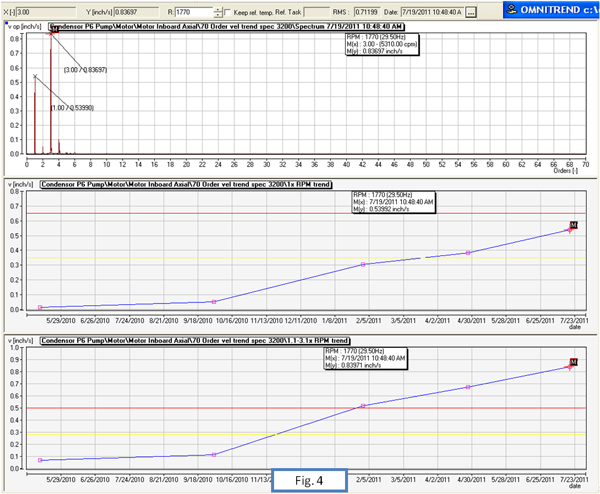 When taken offline for repairs, the repair provider discovered the true damage. The coupling had been destroyed (see Figure 5). The part of the rubber spider (insert) that drove the pump in the direction of rotation was completely gone. In fact, it was apparent that it had been gone for some time. This had allowed the metal jaws of each coupling half to contact one another, and during the months, a large amount of metal had been removed from each of the three jaws on each half of the coupling.

The pump train was in misalignment, just as the analyst had predicted, only now the misalignment had destroyed the coupling, as well. The number of years that have possibly been removed from the life of the bearings can only be speculated, but it is a certainty that 300,000 impacts per hour for about 14 hours per day for more than a year significantly affected the bearings’ lifetime.

The cost of eliminating a destructive defect early is always much less than waiting until the damage begins to show. Some other damage or negative effects that are likely to occur because of damaging vibrations are:

The coupling was replaced, and the pump and motor shafts were laser aligned to within precision tolerances. The new axial baseline measurements taken in October 2011 along with the trend of the 2× to 3× vibration are shown in Figure 6. 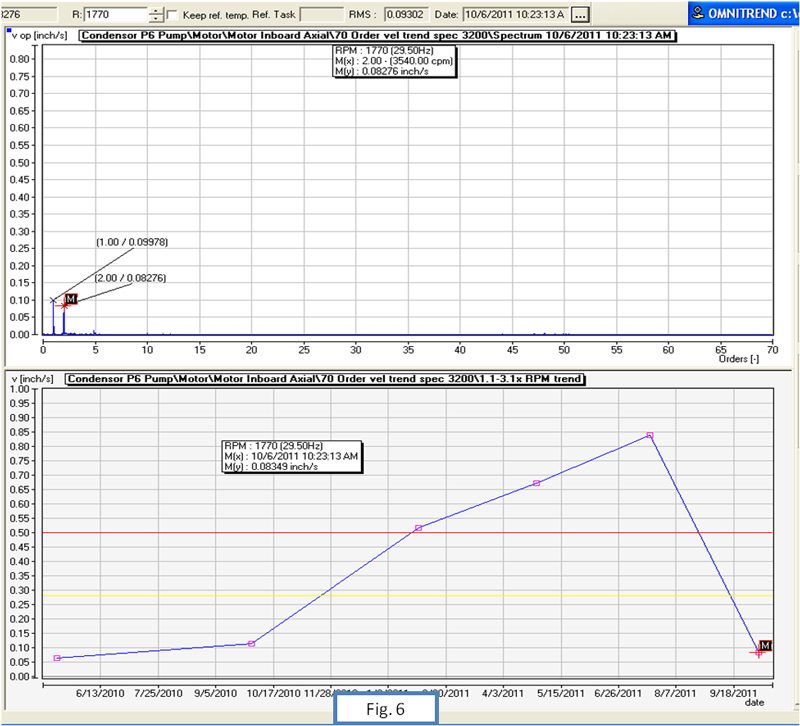 James Laxson is a reliability technician at Hi-Speed Industrial Service, a division of QualiTest Diagnostics. He started with the Millwright Local Union #1544 in 1997 and took classes on turbines, compressors, conveyors, pumps, bearings, alignment, etc. He was trained on laser alignment by LUDECA Inc. while at the Valero Gas Refinery in Memphis, Tenn., where he started performing root cause analyses on pump failures and working with vibration analysis. He is a Vibration-Institute-certified Category II Vibration Analyst and an ITC-certified Level I Infrared Thermographer. He can be reached at jlaxson@hsisco.com.

Mike Fitch is a vibration applications engineer for LUDECA, Inc. He can be reached at 305-591-8935 or mike.fitch@ludeca.com.