My previous article in the April issue of Pumps & Systems (read it here) on the use of automated data acquisition systems focused on testing two pumps individually to compare the pumps’ actual performance to the predicted OEM curve for a new pump.

The clusters of data showed the main flow regions the two pumps operated during the testing. However, on the same plot, there were clusters of data with pump head being oddly out-of-line with the rest of the tracked data. The parting quiz to our readers was to explain the reason why a pump head at certain times was considerably greater than the rest of the logged displayed data.

I received feedback from several people on this question, including Lee Ruiz of Oceanside, California:

Dr. Nelik,
Thanks for your articles. In your April field efficiency case study, it appears that figure 4 (April-17 P&S) is a combination of pump 1 performance in addition to the parallel operation of 1 & 2 operating together.

Right on, Lee! That is exactly what the PREMS-2A system picked up: a two-pump operation, resulting in higher total head but not necessarily a proportional increase in flow. This means our system is “friction-dominated,” with elevation head being negligible (see Figure 1). 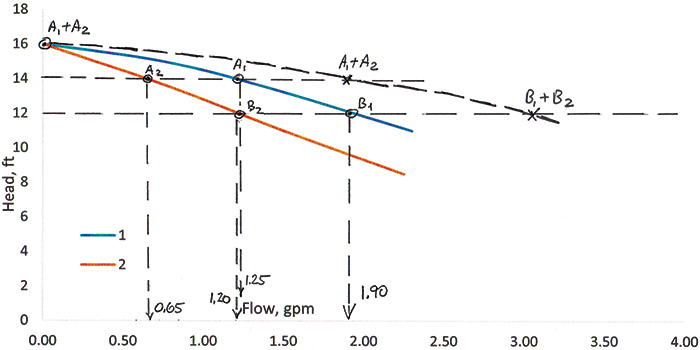 The PREMS-2A system did all that automatically and online for us, as shown on the system screen continually, but Figure 1 helps us dissect the result and explain what happens when pumps operate in parallel.

Observations from the analysis:

At our next Pump School we will illustrate the effect of measured vibrations on additional fine-tuning of the identification of the actual operating regime, and to correlate the vibration values with the flow as a percent of BEP.