How a Variable Frequency Drive or VFD relates to horsepower and torque.
by Joe Evans
04/26/2013

My January 2013 Pumps & Systems’ column focused on the reduction in motor horsepower (HP) as frequency is reduced by a variable frequency drive (VFD). I had several requests to revisit this subject and explain the relationship between HP and torque across a broad range of frequencies.

HP & Torque Relationship
The relationship between the HP and torque produced by an electric motor can be a bit perplexing. When that motor is controlled by a VFD, it can be confusing.

In a linear environment, work is the product of the force applied to an object and the distance the object travels due to that force:

In a rotational environment, torque is the equivalent of work, but its value is slightly more complex. Torque is equal to the force applied, its distance from the axis of rotation (radius) and the angle (θ) at which the force is applied:

In the U.S., torque is expressed in pound feet (lb-ft). When I was in school, it was foot pounds (ft-lbs), and I still use the old value. Torque indicates how much work is performed, but it shows nothing about how quickly that work is completed.
Power is the rate at which torque (work) is performed:

Based on the relationship, torque must double if HP is to remain constant when speed is reduced by one half. To produce the same HP at the lower speed, a motor has to do twice as much work per rotation, which requires twice as much torque. That is why the shaft and frame of a 900 rpm motor are usually larger than those of an 1,800-rpm motor of the same HP.

Introduction of a VFD
When the speed of an AC motor is controlled by a VFD, HP or torque will change depending on the change in frequency. Figure 1 provides a graphical illustration of these changes. The X axis is motor speed from 0 to 120 hertz. The Y axis is the percent of HP and torque. At 60 hertz (base motor speed), both HP and torque are at 100 percent. When the VFD reduces frequency and motor speed, it also reduces voltage to keep the volts/hertz ratio constant. Torque remains at 100 percent, but HP is reduced in direct proportion to the change in speed.

At 30 hertz, the HP is just 50 percent of the 60-hertz HP. The reason this occurs is because the total torque produced per unit of time is also reduced by 50 percent because of fewer motor rotations. You can use the HP and torque equations to verify this relationship. 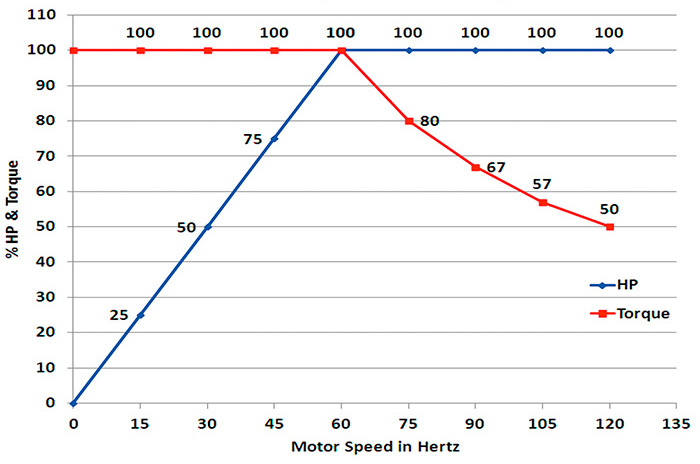 Theoretically, torque is reduced by the ratio of the base speed to the higher speed (60 hertz / 90 hertz = 67 percent). In real applications, other factors can reduce the actual available torque well below the theoretical values shown in Figure 1. These include increased bearing friction, increased fan loading and additional rotor windage. A motor’s full-load torque must be derated when operated at speeds above 60 hertz. Typical manufacturers’ derating guidelines suggest using the base frequency to maximum frequency ratio for speeds up to 90 hertz. At speeds above 90 hertz, the square of the ratio is often used.

End users should check with their manufacturer before operating a motor above its base speed. Rotor balance, bearing life and critical speed are typical concerns. High-quality, 1,800-rpm and 1,200-rpm motors up to 200 HP should be able to handle up to two times the base speed without problems. Overspeed is usually not allowed on 3,600-rpm motors of more than 50 HP. National Electrical Manufacturers Association (NEMA) MG1 provides several overspeed guidelines that manufacturers must meet.

Have you ever made the mistake of running a 230-volt motor on 460 volts? If so, you probably noticed a lot of smoke in the room. There are, however, applications in which this can actually work. A novel way to provide constant torque at higher-than-base speeds is to run a 230-volt motor on a 460-volt VFD. In these applications, the drive is programmed to provide full voltage at 120 hertz and then reduces voltage proportionally as speed is reduced. At 90 hertz the output voltage would be 345 volts and at 60 hertz it would be at the motor nameplate voltage (230 volts). The volts/hertz ratio remains at a constant 3.83 throughout the speed range.

Joe Evans is responsible for customer and employee education at PumpTech, Inc., a pump & packaged system manufacturer & distributor with branches throughout the Pacific Northwest. He can be reached via his website www.PumpEd101.com. If there are topics that you would like to see discussed in future columns, drop him an email.